Jeff Jacoby
|
Posted: Jul 11, 2016 12:01 AM
Share   Tweet
The opinions expressed by columnists are their own and do not necessarily represent the views of Townhall.com. 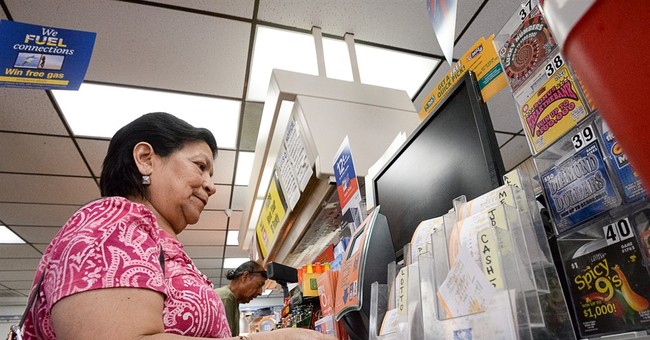 JEN FLANAGAN is distressed. The state senator from Leominster, a 40-year-old Democrat, is worried that not enough young people are wasting their money on gambling. The Massachusetts State Lottery offers an abundance of games designed to separate players from their dollars — among them, Megabucks, Powerball, Keno, and Mass Cash, not to mention an endless supply of scratch tickets in denominations ranging from $1 to $30 — but millennials aren't playing as much as Flanagan thinks they should.

"Young people have the lowest participation rates, and these continue to decline," she writes with concern. "Simply put, millennials don't play the lottery."

Why? Because they can't do it online.

For the younger generation, Flanagan argues, anything that isn't on a smartphone might as well be nonexistent. And while phones today can be used for everything from booking air travel to trading stock to buying dinner, "we still cannot buy a ticket for tonight'sMegabucks."

So Flanagan has been pushing Senate Bill 2351, which would authorize the Massachusetts Lottery to move into the online gambling business, thereby enabling anyone with a mobile phone or other digital device to buy a ticket fortonight's Megabucks (or any of the Lottery's other games) without having to visit a convenience store, gas station, or supermarket. Last month the Legislature's Joint Committee on Consumer Protection gave the bill a thumbs-up, and referred it to the Senate Ways and Means Committee.

Meanwhile, the state Lottery Commission is already revving its engines in anticipation of all the money to be made through the Internet. In December, the commission invited online gambling companies to submit proposals for "digital versions of existing and new lottery games, including but not limited to social gaming and daily fantasy sports options." According to Online Poker Report, an industry news site, responses were received from 20 gaming firms, among them such heavy hitters as IGT, Intralot, and Star Fantasy Leagues.

Massachusetts officials boast that the state lottery is the nation's most successful. Some $5 billion in lottery tickets were sold last year, a record high. On a per capita basis, lottery sales in Massachusetts — the amount spent on scratch tickets, the Numbers Game, Megabucks, and all the rest — averaged $740. That is a stunning number. The 43 states and District of Columbia that operate lotteries did about $70 billion worth of business last year, which averages out to $230 in gambling revenue for every man, woman, and child within their borders. Thus sales in Massachusetts were more than three times the US average.

That is worth keeping in mind when Flanagan and others on Beacon Hill bewail the money being lost by the supposed failure to attract younger players to the Massachusetts Lottery. The Lottery's executive director, Michael Sweeney, has told state lawmakers that if they don't pass a bill allowing him to take his staggeringly lucrative operation online, the Lottery will "quickly [end] up in the scrap heap of history." In 2012, a report from then-Treasurer Steve Grossman warned ominously that the Lottery must move to the Internet or be crushed by competition from commercial gaming sites and other states — "the threat is imminent," the report concluded, putting the words in boldface italics for emphasis.

Imminent? In the four years since Grossman's dire message was published, Massachusetts Lottery sales have climbed by another quarter-billion dollars. Allowing online gambling options might entice more millennials — and countless other smartphone users — to blow more money on Powerball and Keno. But the world probably won't come to an end if the Legislature says no.

Which is exactly what the Legislature should say.

Gambling among millennials is already high. According to the Massachusetts Council on Compulsive Gambling (a nonprofit health agency subsidized by the state Lottery), college students are more likely to succumb to gambling disorders than any other segment of the population. While compulsive gambling affects an estimated 1.7 percent of Massachusetts residents, the level of problem gambling among college students is more than 10 percent. Particularly at risk, according to the council (which lists numerous peer-reviewed studies from which its data is drawn) are student athletes, who appear to develop gambling problems at higher rates than other students.

Despite Flanagan's claim that "simply put, millennials don't play the lottery," the compulsive gambling council reports that playing the lottery or numbers game is the most common form of gambling by college students, with nearly 25 percent participating annually. (Second in popularity is casino gambling, at 20 percent annually.) Young people who want Lottery tickets have no trouble buying them, and there is no public-policy reason to coax them to buy even more.

State lotteries are often justified as an effective, yet voluntary, means of raising money to pay for public services. In Massachusetts last year, $945 million in State Lottery profit was disbursed as local aid to the Commonwealth's cities and towns. But it is odious for government to raise money by preying on the poor and the foolish. Everyone knows that lottery tickets are most frequently purchased by people least able to afford them. Yes, adults should be free to squander their money on bets they have only a microscopic chance of winning. But the state shouldn't be encouraging them to do so. And it certainly shouldn't be seeking out new ways to tempt the sad suckers into parting with their cash.

Human vice and appetite come in endless varieties, and there is plenty of money to be made by catering to them. In a free society, as a rule, government should neither ban such consensual activities nor monopolize them. Those who wish to gamble — like those who wish to drink, or have sex, or see raunchy movies, or smoke — should be at liberty to do so. The state ought to be involved only to the extent necessary to prevent fraud, enforce legitimate health or safety standards, and collect taxes.

Massachusetts has no more business running numbers than it does running nightclubs. When it comes to the myriad things that stimulate the pleasure center of the brain, supply and demand can almost always be entrusted to private enterprise, leaving government to regulate but not dominate.

Rather than fret because the Bay State can't sell Megabucks tickets online, legislators like Flanagan should be asking why it sells them at all. Through its $5 billion Massachusetts Lottery, state government enables compulsive gambling, preys on the desperate, and redistributes revenues from poor to rich. It's deceptive and disgraceful, and it's being done in our name. It will be even more abusive if it goes online.