Who'll Be Looking Down On Baker? 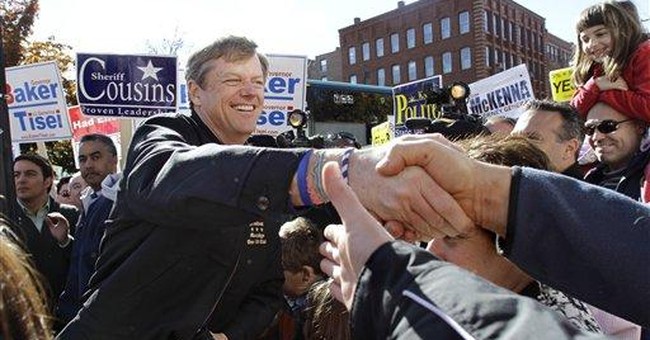 Governor Deval Patrick will be leaving his office on the third floor of the State House in a few weeks. It's a good bet that Governor John Andrew will be leaving at the same time.

Patrick, the Commonwealth's 71st chief executive, will be succeeded in January by Charlie Baker, and by tradition each incoming governor chooses the portrait of a predecessor to hang in the corner office. Patrick's choice was John Albion Andrew, the Bay State's 25th governor and an ardent abolitionist best known today for his role in creating the 54th Massachusetts Infantry Regiment. It was a fitting salute to the 19th-century Republican who said with conviction that whatever earthly sins he might have to account for, "this I know: that I was never mean enough to despise any man because he was black."

Whose portrait will take Andrew's place?

Two recent governors, Mitt Romney and Paul Cellucci, put Governor John Volpe's painting in the coveted spot — Cellucci to celebrate Volpe's Italian heritage; Romney because his father had served with Volpe in Richard Nixon's cabinet. Gazing down on Jane Swift was turn-of-the-20th-century governor Winthrop Crane, who like Swift was a native of Berkshire County. William Weld never explained why he favored the portrait of a rabble-rousing crook like James M. Curley — no doubt it amused him, as many things did.

Baker has been called a Weld protégé, but he's unlikely to make a similarly sardonic pick. Elbridge Gerry, eponym of "gerrymander," presumably won't be returning to the corner office with the next governor. Neither will nativist Henry Gardner, who rode an anti-immigrant wave to power as the state's only Know-Nothing governor in 1855.

Of course, Baker couldn't go wrong by hanging the picture of a former governor who was also one of the nation's founders, such as Samuel Adams or John Hancock. The former was honored by Michael Dukakis; the latter was the pick of Edward J. King.

But a shrewder choice would be the 1925 Edmund Charles Tarbell oil of Calvin Coolidge. It's a splendid portrait of a splendid governor — a leader as renowned for his competence and fiscal prudence as for his courage and political skills. Coolidge was one of the greatest vote-getters in Massachusetts history, and his most famous speech — "Have Faith in Massachusetts" — remains well worth consulting, especially by a governor-elect who summarizes his vision as "Let's be great again, Massachusetts."

Besides, Coolidge is the only Massachusetts governor who became president.

If that's not a decor recommendation, what is?