Does the First Amendment Stop at 35 Feet? 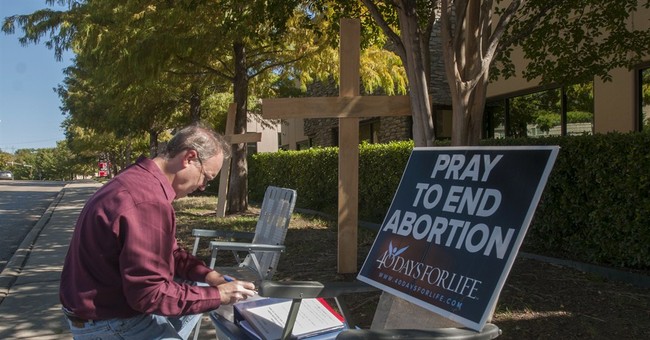 Early next year, the Supreme Court will take up McCullen v. Coakley, a case challenging the Massachusetts statute that requires anti-abortion protesters and "sidewalk counselors" to stay at least 35 feet away from abortion-clinic entrances. Signed by Governor Deval Patrick in 2007, it is the strictest such "buffer zone" law in the nation; violators can be punished with up to 30 months in prison and fines as high as $5,000.

But McCullen v. Coakley isn't about abortion. It's about freedom of speech. Can Massachusetts make it a crime for private citizens to stand on a public sidewalk and peacefully express their view?

It's easy to defend free speech when you agree with the speaker's message. The challenge is to do so when the message is one you despise. "If liberty means anything at all," George Orwell wrote, "it means the right to tell people what they do not want to hear." A lot of people don't want to hear that abortion is wrong, or to be confronted with images of babies in the womb, or to be reminded that "choice" is a euphemism for the destruction of human life. Many Americans may find such messages alarming, outrageous, or upsetting, especially when they are directed at girls or women going to get an abortion. But the First Amendment wasn't written to shield citizens in public spaces from unpopular or distressing speech. It was written to shield unpopular or distressing speech from being suppressed in public spaces.

There have always been messages that some Americans despise, and there have usually been government officials prepared to stifle the messenger.

At the State Capitol in South Carolina in 1961, the sight of black students carrying signs reading "Down with segregation" was one that white onlookers may have found genuinely offensive. But that didn't entitle police to arrest the students for breach of the peace and throw them in jail, as the Supreme Court ruled in Edwards v. South Carolina two years later.

And with equal vigor it protects both pro-life and pro-choice speech.

Which is why the Massachusetts zone of exclusion is such an affront to the Bill of Rights.

To be sure, no constitutional liberty is absolute. It is well-established that impartial "time, place, and manner" restrictions may lawfully curb speech in a public forum. But such restrictions must be scrupulously content-neutral and the Massachusetts law plainly is not. It applies only to abortion clinics — not to all medical facilities — so the only kind of speech it effectively restricts is speech related to abortion.

Even more egregious is the law's explicit exception for all "employees or agents" of the abortion clinic while "acting within the scope of their employment." It's hard to imagine a less impartial rule. Someone wishing to talk to a pregnant woman about alternatives to abortion is forced to shout from 35 feet away; someone on the abortion-clinic's payroll can move at will within the buffer zone, with no speech restriction at all. Like any private business, abortion facilities are perfectly free to exclude protesters, critics, or anyone else from their own premises. But Massachusetts in effect has extended abortion clinics' proprietary rights over everything within a 35-foot radius, including public sidewalks and streets.

Worse yet, the law doesn't let pro-life speakers approach even pregnant women who want to hear their message.

McCullen v. Coakley isn't about abortion. It is about the denial of free speech rights for one side — and only one side — of one the most unsettled controversies in American life. Even in Massachusetts, that's unconstitutional.