The Saudis' UN Snub Was A Message Meant For Obama 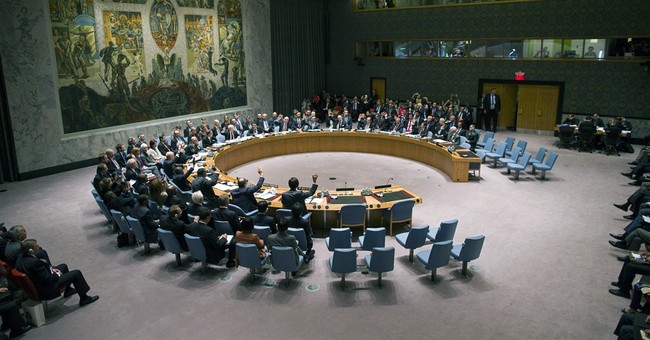 Is there an idiom in Arabic for cutting off your nose to spite your face? Saudi Arabia's abrupt rejection on October 18 of the UN Security Council seat to which it had just been elected was described as "bizarre" and "baffling," a "perplexing" decision that that left diplomats "gasping" and was "met with incredulity." No member of the United Nations had ever done such a thing, and the Saudi government's explanation was about as subtle as an uppercut.

"The … double standards existing in the Security Council prevent it from performing its duties and assuming its responsibilities," the Foreign Ministry charged angrily, and the results have been "continued disruption of peace and security, the expansion of the injustices against peoples, the violation of rights, and the spread of conflicts and wars."

It was even more stinging in its indictment of the recent Security Council resolution that effectively immunized Syrian dictator Bashar Assad from Western retaliation for his poison-gas massacre in August:

"Allowing the ruling regime in Syria to kill its people and burn them with chemical weapons in front of the entire world and without any deterrent or punishment is clear proof and evidence of the UN Security Council's inability to perform its duties," the Saudis seethed.

Yet if Saudi Arabia really wanted to fix the Security Council's glaring flaws, why would it spurn the seat it had long coveted? Denying itself a voice and a vote on the UN's most influential body seems a poor strategy for reform. The Saudis' sudden about-face — which almost surely was ordered by King Abdullah himself — was certainly dramatic. But what was it supposed to accomplish?

The answer came from Saudi Arabia's intelligence chief, Prince Bandar bin Sultan. "This was a message for the US, not the UN," he told European diplomats, according to Reuters and The Wall Street Journal. Bandar, who spent 22 years as the Saudi ambassador to Washington, let it be known that relations between Riyadh and Washington, already badly strained over the Obama administration's policies toward Syria, Egypt, and Iran, are poised to get worse. He reportedly said that Saudi Arabia intends to scale back its cooperation with US intelligence agencies in assisting the Syrian rebels fighting against Assad, and will seek other allies to work with instead. "The shift away from the US is a major one," Reuters' source was quoted as saying.

In short, Saudi Arabia's refusal to take its seat on the Security Council had much less to do with the UN than with calling attention to Riyadh's alarm and frustration at how its most important Western ally has been acting.

Obama's flaccid response after Syria brazenly defied his "red line" over the use of chemical weapons angered the Saudis, not because the Saudi government is a champion of human rights — it is anything but — but because it is heavily invested in the rebellion against Assad, whose foremost patron is Iran, Saudi Arabia's most dangerous foe. Even more alarming to the Saudis is administration's crush on Hassan Rouhani, the new Iranian president. Iran's pursuit of nuclear weapons deeply worries Saudi Arabia, and Washington's unfolding détente with Tehran — which the Saudis say they were never consulted on in advance — is only intensifying those qualms.

Some Americans may be tempted to shrug off Saudi complaints about US foreign policy. The Saudi regime isn't a very nice one, and many of its priorities, from the repression of women and basic democratic freedoms at home to the export of feverish Wahhabi bigotry abroad, are repellent. A Gallup poll in March found that 58 percent of Americans have an unfavorable opinion of Saudi Arabia, the country that spawned Osama bin Laden and most of the 9/11 hijackers.

Nevertheless, Saudi Arabia, though not a true friend, has been an important regional ally of the United States for many years. It has supported American operations against Al Qaeda in the Gulf . The CIA drone strikes targeting jihadists in Yemen, for example, have been launched from a base in neighboring Saudi Arabia. However odious other Saudi policies may be, Riyadh's unwavering opposition to letting Iran acquire nuclear weapons is dead on. (Iran, a self-proclaimed enemy of the United States, is viewed negatively by almost 9 out of 10 Americans.) Saudi Arabia's growing sense of abandonment by a US administration that cannot be trusted to enforce its own red lines is a legitimate cause of anxiety.

President Obama came to office vowing to improve US relations with the Arab world. He gave his first formal interview as president to the Saudi-funded al-Arabiya TV. On one occasion he even bowed to the Saudi king. Whatever your opinion of such symbols and gestures, they are no substitute for wise and effective foreign policy. You don't have to like the Saudis to understand their distress over Washington's misguided policies — or to share it.