Some Questions They Weren't Expecting 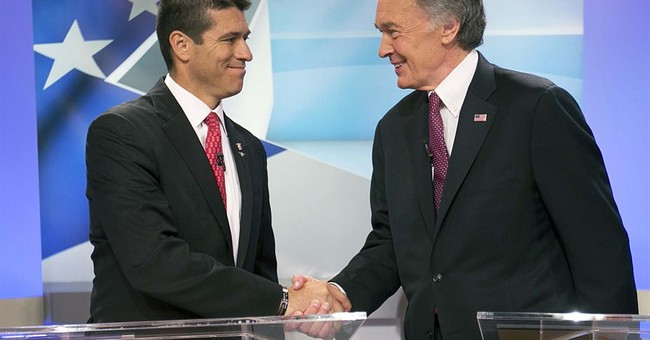 Ask Democrat Ed Markey or Republican Gabriel Gomez about guns or ObamaCare or each other's qualifications to be the next US senator from Massachusestts, and out come the canned talking points and put-downs that anyone following the Senate race quickly wearies of. But what if you toss them some questions from off the beaten path? I put some nonstandard queries to the two nominees, hoping their answers might be illuminating – or at least unexpected. Herewith excerpts from their replies. (The candidates' full responses are posted online: Click here for Markey's and here for Gomez's).

1. Are TV shows getting better or worse?

TV entertainment is more gorgeous, wide-ranging, and technically brilliant than anything viewers a generation ago could have imagined. At the same time, it's far more sexualized, violent and sleazy. I wondered if either candidate would express a preference for the sitcoms or game shows they grew up with.

Not a chance. Gomez emphatically said TV shows are "better!" – his exclamation point, not mine – but he does have limits: "I don't keep up with the Kardashians." Markey mildly praised the fact that "there are so many choices" and said that he usually chooses sports.

2. What popular political aphorism do you consider egregiously wrong?

Gomez rejects H. L. Mencken's sneer that no one ever lost money or an election "by underestimating the intelligence of the great masses of the plain people." Voters, says Gomez, "are smarter than cynics give them credit for." Markey disputes the maxim "If you're not a liberal when you're 20, you have no heart, and if you're not a conservative at 40, you have no head."

3. Lord Acton famously warned that "power tends to corrupt." Do you feel that his warning applies to you?

I'd hoped the candidates might talk about personally resisting the dark temptations that come with power, but they played it safe. Markey praised the Founders for bequeathing us a republic in which power is restrained via checks, balances, and regular elections. Gomez reiterated his support for term limits on members of Congress.

4. Did you ever read a book that changed your way of looking at the world?

Many books have rocked my world; I'm always interested in learning which books have done the same for others. Each candidate mentioned just one. Markey cited To Kill A Mockingbird by Harper Lee. Gomez's pick was the 2010 bestseller Half the Sky: Turning Oppression into Opportunity for Women Worldwide by Nicholas Kristof and Sheryl WuDunn.

5. Do too many people go to college?

Both candidates acknowledge that higher education today, especially considering its insanely high costs, isn't for everyone. Many students with good vocational training "can flourish outside a college environment," says Gomez. Nevertheless, says Markey, "college is still the best way for a person to get a job and get ahead in life."

6. Former presidents get a hefty annual pension: lavish staff, office, and travel allowances, round-the-clock security, and health care for life. Given such generous taxpayer support, is it appropriate for ex-presidents to pocket tens of millions of dollars in speaking fees?

Harry Truman refused to "commercialize" his prestige as a former president, but his money-grubbing successors have no such scruples. I find the post-White House avarice pretty shabby. But neither Markey nor Gomez chose to join me on that bandwagon.

7. Is every problem in society something government should address? Can you name a troubling social concern that does not require government action?

To my dismay, neither candidate identified a single issue that it is not government's place to solve. I was hardly expecting a libertarian manifesto, yet surely there is some societal problem that Americans don't need Big Brother's help with.

8. Which senator in Massachusetts history would you say was most overrated? Most underrated?

Markey ducked this one: "The only rating system that matters is the voters," he said, though I doubt any historian would agree. Gomez's choice of an underrated senator was Edward Brooke, whose election as a black Republican in the 1960s "helped break down many barriers and was key to making the type of civil rights progress our nation needed."

9. What's the best blunder you ever made?

I hoped this question might elicit stories of a dreadful mistake that turned out to be a blessing in disguise. That wasn't quite how the candidates took it. Markey's "best blunder" was "missing the Bucky Dent home run game" against the Red Sox in 1978. Gomez said his was trying out for the SEALs "even though it meant risking my status as a pilot."

10. Thomas Jefferson said in 1787 that if forced to choose between "a government without newspapers, or newspapers without a government, I should not hesitate a moment to prefer the latter." Do you agree?

Why, doesn't everyone? Both would-be senators acknowledged that a free press is indispensable to democracy. But neither Gomez nor Markey was willing to endorse Jefferson's choice – not even hypothetically. Then again, Jefferson himself eventually reached a pretty sour view of the press. "Nothing can now be believed which is seen in a newspaper," he wrote after seven years as president. "The man who never looks into a newspaper is better informed than he who reads them."

Hmm – maybe I should have asked the candidates if they agree with that.