Jeff Davidson
|
Posted: Jun 26, 2021 12:01 AM
Share   Tweet
The opinions expressed by columnists are their own and do not necessarily represent the views of Townhall.com. 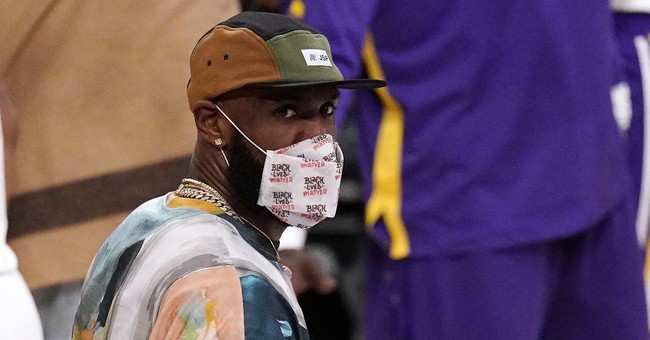 If you watched any NBA games in June, or WNBA games (the women’s professional league) you might have noticed a strange phenomenon. The players wear masks as they enter the court.

Once the game commences, the non-starters sit on the sidelines, spaced significantly apart, still wearing masks. All are encouraged not to interact too closely with one another.

As the game unfolds, the starting players run up and down the court at top speed. Soon after, they begin perspiring and, in closing guarding each other on the court, frequently exchange perspiration. While competing against opposing players, they literally breathe on one another.  https://fansided.com/2021/04/15/nba-2k-history-sweat-realism

As the ball travels up and down the court, is passed around among teammates on offense, and then perhaps rebounded, or collected by the other team after a made basket, the opposing team proceeds down the court, touching the ball numerous times in the span of 24 seconds – the length of the NBA shot clock.

The ten players on the court, plus the referees, and the bench players entering the game, in the aggregate, touch the ball several hundred times before the end of the first half. Yet, the NBA maintains a strict and rigid anti-virus protocol in the name of protecting its players.

Beyond symbolic COVID protocols, from the outspoken superstar and overly-woke, LeBron James, on down the NBA, is two-faced when it comes to U.S. policy with China. It is widely known that the Chinese government has been nothing short of terrifying to its Uyghur population.

The Uyghurs, and a variety of other largely-Muslim ethnic groups in China’s Xinjiang region, have been subjected to internment, slave labor, and forced sterilization. Human rights groups cite China as having unlawfully detained 1,000,000+ Uyghurs in a vast network of "re-education camps," while incarcerating hundreds of thousands of others. Former prisoners have reported instances of sexual abuse and even torture.

While LeBron James cries ‘foul’ over U.S. laws, American jurisprudence, and police procedures, he has nothing to saying about China. The NBA, you see, has highly lucrative deals with Chairman Xi Jinping’s Chinese government. The huge contracts the NBA has with China means that everybody involved in the deals get rich... everyone except these poor Chinese citizens, many of whom live in abject poverty, under the thumb of the government.

It’s not as if LeBron James, and the NBA in general, is unaware of China’s miserable human rights record. In countless ways, the Chinese government, over many years running, has amply demonstrated how little concern it has for the rights of its citizens. That doesn't dissuade the top stars in the NBA from pretending nothing is happening.

A Matter of Principle!

Some top NBA players, including perennial all-star James Harden, have publicly stated that they don't wish to play on teams owned by a professed Republican. Think about such a viewpoint: some professional athletes don't want to play on a team owned by someone who has a political viewpoint different than theirs.

Said another way, one must agree with how they think in order for them to play for you. Could anything be more absurd? What if it’s decided that only Democrats are allowed to own NBA teams? Would that satisfy the NBA prima donnas? Doubtful. They would find something else to rail about.

The NBA, for sure, is a two-faced organization, perhaps worse than Major League Baseball, which moved its All-Star game from Atlanta to Denver because the State of Georgia had the temerity to tighten election security.

Mercifully, the NBA has been declining in popularity. TV viewership is experiencing a record poor year. Will the league truly ‘awake’ in the near future? Not unless major money is at stake.