Jeff Crouere
|
Posted: Aug 25, 2018 12:01 AM
Share   Tweet
The opinions expressed by columnists are their own and do not necessarily represent the views of Townhall.com. 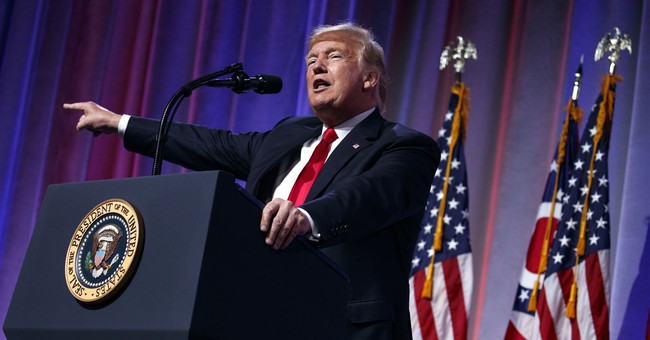 In our nation’s history, only two U.S. Presidents have been impeached by the House of Representatives: Andrew Johnson and Bill Clinton. Both remained in office, surviving a trial in the U.S. Senate. Of course, President Richard Nixon resigned before he would have surely faced impeachment and removal from office.

In the last few days, the possibility of impeachment of the President has been continually raised by the corrupt, incompetent and hopelessly liberal mainstream news media infected with Trump Derangement Syndrome. In fact, on Wednesday August 22, from 6 a.m. until Midnight, according to the Media Research Center, the words “impeachment” or “impeach” were mentioned a ridiculous 222 times on CNN and MSNBC alone.

This hysteria was unleashed on viewers because of the guilty pleas of the President’s former attorney, Michael Cohen. On Tuesday, he admitted to committing eight federal crimes, including making “illegal payments” to women who alleged affairs with President Trump. Cohen said that Trump directed him to make the payments “for the principal purpose of influencing the election.”

While prosecutors from the U.S. Attorney’s office in Manhattan believe the payments violated both contribution limits and bans on corporate donations, some experts consider the activity to be perfectly legal. For example, lawyer and talk show host Mark Levin said, “A campaign expenditure under our federal campaign laws is an expenditure solely for campaign activity. A candidate who spends his own money or even corporate money for an event that occurred not because of the campaign is not a campaign expenditure.”

Regardless of the legality of Mr. Cohen’s conduct, the media used the admission to unleash holy hell on President Trump. It is just the latest effort in their ongoing campaign to remove him from the office he won in an Electoral College landslide.

The campaign to remove President Trump also includes the Deep State players who set the illegal trap many months ago. The phony Christopher Steele dossier, funded by Hillary Clinton’s campaign and the DNC, was used to convince judges from the Foreign Intelligence Surveillance Court to authorize a spying operation on Trump campaign aide Carter Page. While former FBI Director James Comey incredibly exonerated Hillary Clinton, he intensified the investigation into Russian collusion and the Trump campaign.

This nonsense should have ended with the election of Donald Trump as President of the United States; however, a feckless and incompetent Attorney General, Jeff Sessions, was appointed. Without informing the President, he recused himself from the Russia investigation and his deputy, Rod Rosenstein, appointed Robert Mueller as the Special Counsel in May of 2017. Since that time, life has been miserable for Donald Trump as Mueller has been given an almost unlimited mandate. With that type of threat hanging over his head, the President has not enjoyed any respite from this overzealous Special Counsel and his team of partisan Democratic Party attorneys.

With no real restrictions on his activities, Mueller went after a Trump campaign volunteer and his pick to be National Security Adviser for lying to the FBI. He has now been successful in convicting former Trump Campaign Manager, Paul Manafort, for a variety of tax and bank fraud charges from several years ago.

Of course, none of this relates to Russian collusion and as the wide-ranging investigation proceeds, no such wrongdoing by President Trump will be uncovered. To justify the millions of dollars spent on the investigation, Mueller has joined forces with other prosecutors in an effort to destroy Donald Trump.

Today, the President is facing an unprecedented assault from Mueller’s team, the U.S. Attorney’s Office in the Southern District of New York, and the District Attorney’s Office in Manhattan. His presidency is being threatened, as well as his business and the potential inheritance of his children.

If this leads to an impeachment by Congress, it would be a travesty and the equivalent of a political coup by the President’s enemies. Whereas Bill Clinton clearly committed perjury and obstruction of justice, there is no proof that Donald Trump committed any crime and certainly, there was no collusion with Russia.

This campaign of political destruction is ongoing because the Deep State, the political establishment, and the corrupt news media abhor the President and are disgusted by his “America First” agenda. These powerful forces will not stop and will continue to desperately try to overturn the 2016 election results and drive President Trump from office. Donald Trump is a natural fight and he will counterpunch, but, increasingly, he is alone in this battle.

If Democrats take control of Congress, impeachment hearings will begin, and this nonsense will intensify. Sadly, the best way to stop this travesty is to send more Republicans to Congress in the mid-term elections, even though most of them are weak and useless and refuse to show support for the President.

At this point, President Trump must rely on the only group who has ever supported him, the “Deplorables,” the 63 million voters who withstood ridicule and biased media coverage to cast a ballot for him in November of 2016.

This group is the only one that can save President Trump because it is the only group that is not controlled by the swamp that has destroyed both Washington D.C. and our entire political system.

Jeff Crouere is a native New Orleanian and his award winning program, “Ringside Politics,” airs locally at 7:30 p.m. Fridays and at 10:00 p.m. Sundays on PBS affiliate WLAE-TV, Channel 32, and from 7-11 a.m. weekdays on WGSO 990-AM & www.Wgso.com. He is a political columnist, the author ofAmerica's Last Chanceand provides regular commentaries on the Jeff Crouere YouTube channel and on www.JeffCrouere.com. For more information, email him at jeff@jeffcrouere.com
Provider Gets Offended By 'Inflammatory' Language as Rep. Chip Roy Exposes Reality of Abortion Procedure
Rebecca Downs
Woke Abortion Witness Tells House Committee Men Can Get Pregnant
Sarah Arnold
After These New Details in Her Tax Filings, Can We Please Put BLM's Co-Founder Under a Legal Microscope?
Matt Vespa
White House Isn't Paying Attention to Americans Getting Their Retirement Plans Wiped Out
Katie Pavlich
Telling Poll Reveals What Issues Americans Really Care About, and It's Not Even Close