Loretta Lynch: She's a Lover, Not a Fighter

Jeff Crouere
|
Posted: Jun 25, 2016 12:01 AM
Share   Tweet
The opinions expressed by columnists are their own and do not necessarily represent the views of Townhall.com. 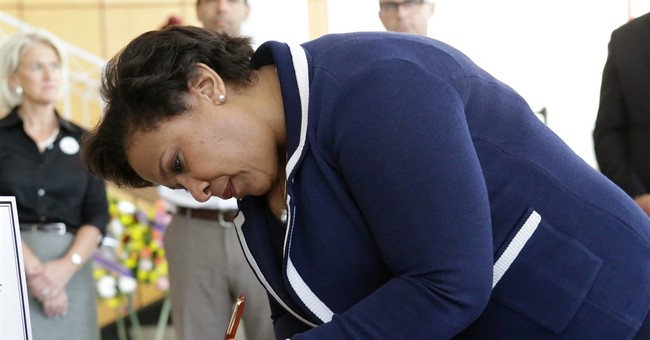 It is hard to believe that Attorney General Loretta Lynch is actually making her predecessor, Eric Holder, the race bating liberal, look good. It is quite an accomplishment to be worse than Holder, but Lynch has achieved that goal in record time, especially with her lame brained response to the terrorist attack in Orlando.

In the early morning hours of the Pulse nightclub attack, Jihadist Omar Mateen made it quite evident in his 911 calls and his maniacal ravings to police negotiators that he killed 49 innocent people as an act of faithfulness to the Islamic State terrorist organization. In his 911 call, he proclaimed a “pledge of allegiance to Abu Bakr al-Baghdadi of the Islamic State.” This unambiguous vow to the leader of the Islamic State should have eliminated any and all doubt about what was motivating Mateen. Without question, he killed the gay nightclub patrons as an act of jihad; however, that was not the conclusion of the Attorney General. Amazingly, Lynch said that Mateen’s motives “may never be known” and that he may have had many reasons for killing 49 innocent people. As a result, Lynch claimed that it would be difficult to “narrow it down to one motivation.”

This is willful ignorance by Lynch as Mateen tried very hard to make his motives crystal clear. For example, he told police negotiators that he was an “Islamic solider.” Thus, in the aftermath of the attack, the nation should have entered into a robust discussion on how to defeat Islamic terrorism at home and abroad. Instead, ever since the Orlando attack, the nation plunged into a discussion about various gun control measures and ways to reduce hatred toward the gay and lesbian community.

The Orlando attack was not about guns or gays; it was about Islamic jihad. Ironically, one of the best ways to help protect the gay and lesbian community in this country is the train them how to use weapons for self-defense and limit the number of refugees entering the country from Muslim countries. Both of these positions are anathema to liberal Democrats like Loretta Lynch who, after the San Bernardino jihadist attack, actually threatened to prosecute anyone who spoke out against radical Islam. In fact, Lynch said that anti-Muslim rhetoric was her “greatest fear.”

The greatest fear for Lynch and everyone in the Obama administration should be the Islamic terrorist acts like the one committed in Orlando. Yet, Lynch seems oblivious to the threat of radical Islam and refuses to identify the harsh reality our country is facing. In her Orlando speech this week, the Attorney General even admitted that she lost track of Mateen’s wife, a possible accomplice to the murders. Lynch said that Mrs. Mateen may be traveling, but “I do not know exactly her location now.” To say this clueless response is not reassuring is the understatement of the century.

Lynch and her boss, President Obama, are constantly giving the American people platitudes about fighting “extremism” and not radical Islamic terrorism. To make matters worse, Lynch said the answer to terrorism is to show “compassion, unity and love” to terrorists. In other words, kill our enemies with kindness.

Undoubtedly, the savage Islamic terrorists are laughing at this feeble response. The nation should be on war footing with a clearly defined enemy, not the nebulous threat of “extremism,” whatever that means.

To Lynch and Obama, Christians, Jews, gays and other minority groups are just as likely to commit terror attacks as Muslims, but the evidence shows otherwise. From the attacks in Fort Hood, Texas to the massacre in San Bernardino, CA to the Orlando killings, the one constant in all of these incidents has been the involvement of radical Islamic terrorists.

It would be refreshing to see our President and Attorney General accept reality and convey the seriousness of the radical Islamist threat to the American people. Instead, along with the liberal media, the administration has been focusing on gay rights and, especially, gun control.

Hopefully, there will not be another terrorist action for many years; however, reality tells us that there will be another one very soon. It is time to accept this bitter truth, deal with it by protecting ourselves and stop living in the fantasy world of political correctness.