Will California Declare War On Baseball Next?

Jeff Crouere
|
Posted: Apr 30, 2016 12:01 AM
Share   Tweet
The opinions expressed by columnists are their own and do not necessarily represent the views of Townhall.com. 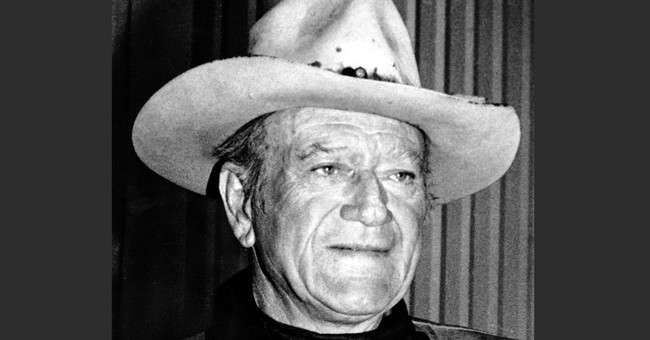 After decades of unchecked illegal immigration and liberal policies, conservatives are in a distinct minority in California. It is most definitely the case in the California Assembly.

On Thursday, state lawmakers rejected a harmless resolution to honor legendary actor John Wayne, a native son of California. Wayne grew up in Glendale, California and later became a beloved actor known for his tough guy roles in dozens of popular movies. In fact, he won an Oscar for his performance in “True Grit.”

Wayne was an American hero who loved his country and was not ashamed to express his patriotism.

However, Wayne critics pointed to his participation with the John Birch Society, his support of the House Un-American Activities Committee and his controversial comments about race in a 1971 Playboy Magazine interview. In the interview, Wayne stated “I believe in white supremacy until the blacks are educated to a point of responsibility. I don't believe in giving authority and positions of leadership and judgment to irresponsible people.”

In a free society, actors and other Americans should be allowed to affiliate with lawful organizations and congressional committees. Although his comments about African Americans were offensive, it is worth noting that they were made in 1971.

This controversy clearly shows that Wayne is being held to a different standard from other deceased public figures who were liberals. For example, the involvement of West Virginia Senator Robert Byrd with the KKK did not prevent Democrats from electing him to leadership positions in the U.S. Senate. In addition, Byrd’s name is on countless buildings and public work projects in his home state. By the way, it is quite unlikely that politically correct Democrats will expunge his name from any of these positions of honor.

Beloved Democrat Presidents such as Harry Truman, who was also a member of the KKK, and Lyndon B. Johnson made very offensive comments about African Americans, using the “N” word. President Franklin D. Roosevelt sent 120,000 innocent Japanese Americans, mostly U.S. citizens, to internment camps during World War II. Despite these controversies, Democrats continue to honor the legacies of these three flawed and politically incorrect presidents.

Wayne is different for California lawmakers for one major reason, he was a conservative. In 1966, he cut commercials for fellow actor Ronald Reagan when he ran for Governor of California. He also supported Reagan when he ran against Gerald Ford for the Republican presidential nomination in 1976.

Liberals have long memories about conservatives, yet have amnesia about fellow Democrats. In the case of Wayne, his incredible career is very worthy of being honored. He stood for American values and definitely loved his country. In fact, after his death from cancer, his family established a foundation to fight this dreaded disease.

The resolution to declare the actor’s birthday, May 26, 2016, as “John Wayne Day” was introduced by Assemblyman Matthew Harper. He represents a district that includes a large airport named after Wayne. All visitors to the airport are welcomed by a nine-foot statue of Wayne.

Harper was stunned that his resolution was defeated by a vote of 35-20, noting that it represented “the orthodoxy of political correctness.” According to Harper, “opposing the John Wayne Day resolution is like opposing apple pie, fireworks, baseball, the Free Enterprise system and the Fourth of July.”

Well said, Assemblyman Harper; however, we are living in a new America. In the America of 2016, U.S. Presidents such as George Washington, Thomas Jefferson and Andrew Jackson are villains, not heroes, because they owned slaves. This was one of the reasons that just last week, Jackson’s image was removed from the front of the $20 bill.

This attitude was represented in the California Assembly debate by Democrat Luis Alejo, who objected to honoring Wayne because “he had disturbing views towards race." Not surprisingly, Alejo neglected to mention that Wayne had close ties with many African Americans in the film industry and that all three of his wives were of Hispanic descent. It’s hard to believe a racist would have made such personal choices.

Regardless of Wayne’s overall views about race, it is patently unfair to judge our celebrities or politicians of yesteryear by today’s moral values. It seems liberals understand these obvious truths regarding their heroes, but conservatives such as John Wayne are judged by a more rigorous and unforgiving standard.

Get ready America, liberals are on the rampage. All of our heroes and pastimes will be re-examined through a politically correct lens. Watch out, baseball may be the next target. It seems players only use a white ball; no other colors are allowed. Can you say racist?