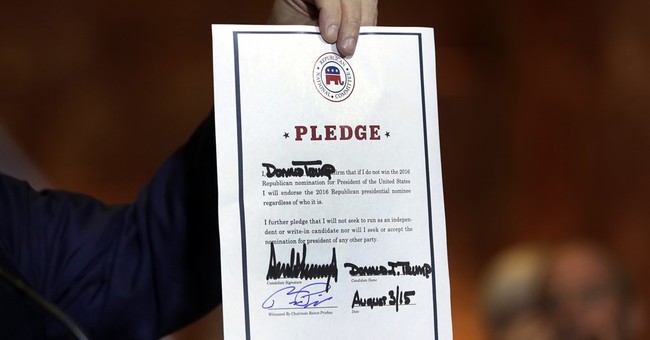 After weeks of pressuring from the Republican National Committee (RNC) to sign a “loyalty pledge,” GOP frontrunner Donald Trump finally acquiesced and signed the document on Thursday. He announced the decision at a press conference at Trump Tower in New York City after meeting with RNC Chairman Reince Preibus.

The “loyalty” issue has been extremely important to GOP leadership, who were terrified that Trump would run as a third party candidate in the 2016 election and doom their chances of victory. Previously, Trump expressed an interest in exploring a third party bid only if the RNC treated him poorly. He said that it gave him “leverage” in the upcoming race. Obviously, at this point, Trump must feel that he does not need the leverage and is confident of victory. The latest polls now show Trump at 30% support, with a double digit lead over his nearest challenger.

Now that Trump has signed this pledge, it is time that the RNC finally show some loyalty to the base of their party, the conservatives. It is quite ironic that a group that has been incredibly unfaithful and disloyal to conservatives would demand a loyalty pledge from the leading candidate.

In recent years, the Republican establishment vigorously opposed the goals of the Tea Party, while happily receiving donations and volunteer support from grassroots conservatives. Clearly, conservatives and Tea Party members are the backbone of the Republican Party, yet the RNC continues to treat them as the enemy, with more hostility than they treat liberal Democrats. This also extends to Tea Party candidates, who have attempted to move the party in a more conservative direction, but have been subjected to ridicule and contempt by the Republican establishment and targeted for defeat.

Conservatives are also the ones who turnout to vote in huge numbers. These chronic voters helped deliver the House of Representatives in 2010 and the Senate in 2014 to the Republican Party. In return, conservatives were given no legislative action as many political promises were not fulfilled. House Speaker John Boehner and Senate Majority Leader Mitch McConnell refused to stop the Obama agenda, approved the President’s extreme appointments and generously funded his liberal programs.

Thus, the RNC and establishment Republicans not only thwart a conservative agenda, they also use financial contributions from conservatives to support moderate candidates. This is why no conservative has received the Republican Party presidential nomination since Ronald Reagan in 1984. Ever since Reagan, it has been only moderate, establishment supported candidates who have been nominated for President.

Since the RNC has shown no loyalty to their most faithful supporters, Donald Trump should not have been forced to sign any ridiculous pledge. It is reminiscent of Communist Party tactics, forcing members to support the leadership or, if not, face the consequences.

Trump’s decision means that conservatives may be without a candidate once again next year. If the Republicans nominate a moderate candidate like Jeb Bush and the Democrats nominate a typical liberal like Hillary Clinton, conservatives will be faced with a familiar paradox, choosing the lesser of two evils.

Conservatives have been loyal to the RNC for too long. The party establishment no longer deserves the loyalty of conservatives who should become free agents in 2016, voting for the Republican nominee only if the candidate espouses their values and shares their positions on important issues. The era of holding your nose and voting Republican needs to end, otherwise, it will be another frustrating presidential election.

Let’s hope that Donald Trump or another conservative wins the Republican presidential nomination in 2016 and can start to demolish the destructive GOP establishment. If not, it is time conservatives found another party more deserving of their loyalty.