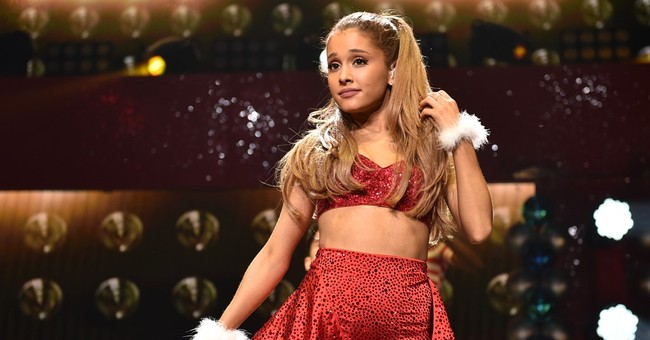 This week, two major music stars made national news. Pop sensation Ariana Grande insulted the country when she was captured on video at a doughnut shop saying “I hate Americans, I hate America.” Grande was upset that a store employee showed her doughnuts decorated in patriotic colors and called them “disgusting.” To make matters worse, when no one was behind the counter, Grande was shown licking the doughnuts.

After the negative reaction, Grande issued two lame apologies. In the first one, she said her anger was really directed at the obesity problem in America. In the second apology, she said that her comments were a “poor choice of words.”

Of course, she would have never apologized if the video had not gone viral. She is the latest in a long line of “stars” that show hatred toward the people who made them rich. Americans made this young singer a millionaire and without the support of her fans, she might be working in that doughnut shop today.

Too many celebrities like Ariana Grande are self absorbed and express no gratitude for their wealth and fame. It is even worse when they couple such ignorance with hatred toward this great country. If Ariana Grande “hates America” so much, she is welcome to move to Saudi Arabia, Libya or Oman. Let’s see how she likes the conditions in those countries. In much of the Muslim world, Grande would be treated like property and not allowed to vote, drive, express an opinion or leave her house without being covered in traditional garb head to toe.

It is time Americans stopped supporting stars that hate this country. Let’s spend our entertainment dollars on musicians or actors who appreciate the greatness of America, despite our faults.

In this country, today, we are fortunate to have constitutional protections, including the Bill of Rights. Among our most cherished rights is the 1st Amendment guarantee of free speech. One star who proudly exercises his free speech rights is Kid Rock, a Michigan native, who displays the Confederate flag occasionally at concerts. He identifies with the rebel spirit of the flag, not racism, discrimination or slavery.

In country today, displaying the Confederate flag is still permitted, even though it was just removed from the South Carolina statehouse. In the wake of the horrific Charleston church shooting, perpetrated by a racist lunatic who was pictured with the Confederate flag, there has been a mad rush throughout the country to ban all confederacy symbols. It goes too far when this stampede interferes with our constitutional rights.

Kid Rock is a free spirit and he did not appreciate the order given by Reverend Al Sharpton’s National Action Network. The civil rights organization demanded that Rock denounce the flag and stop using it at his concerts. This prompted Rock to tell the “people who are protesting to kiss my a..”

The last person Americans should listen to is Rev. Al Sharpton, a known racial agitator and liar. Fortunately, Kid Rock refused to be bullied, showing true American resolve, the kind that Ariana Grande will never understand or appreciate. His independence and belief in free speech is rare in our politically correct society.

In Obama’s America, our freedoms are continually under attack. Despite the 1st Amendment, the network TV Land just banned the harmless show “The Dukes of Hazzard” because the Confederate flag was displayed on the General Lee car. Other radical activists want to forbid Americans from watching the movie classic “Gone with the Wind,” because they believe it glorifies the South.

Thankfully, most Americans still appreciate artistic freedom. It is one of the reasons why we should not hate America, but continue to fight for its survival.