Confidence, and Market Have No Bounce

Looking at worldwide market statistics there isn’t a lot of good news. Not only are those stats penetrating the equity and debt markets, but they are really starting to impact other indicators in the world macro economy.

Last night, China reported a lower Purchasing Manager’s Index. Just under 50. It might be that no one can trust Chinese financial numbers, but if they elected to release a PMI under 50, what is it really? (PMI readings above 50 indicate economic expansion) Maybe it is really a lot worse than that. It’s pretty clear from ancillary data that China has a housing bubble. It’s also pretty clear to me that their banks are carrying some debts that will never be repaid. Communist governments are like that.

Europe is similar. We had the problem supposedly solved and then the good ship Spain blew up yesterday. 7.5% yield on debt. It’s not going down appreciably anytime soon. Because there is no way to hedge Spanish debt, the market uses Italian debt as a proxy. So many are shorting Italian debt in response to Spain, both Italy and Spain banned short selling. Always good to try and manipulate a market when it doesn’t go your way. That’ll work. By the way, the Greeks are almost out of money, again.

In the US, there is no economic indicator that is positive. Some folks see a housing bottom, so I guess that’s positive. But that’s like saying a Naval ship that was almost sunk and was towed in to dry dock is ready for battle. Erik Hurst from the University of Chicago has nailed the housing boom and bust from the very beginning. In December of last year, he said we were just about at the bottom, but the housing recovery will not resemble any other recovery. Until those housing workers learn new skills, we won’t be solving our unemployment problem anytime soon.

Days like we saw yesterday are becoming a regular market occurrence. Instead of one big crash, the market is slowly bleeding to death. Still up 5.96% on the year, but no momo up. This is a Chinese water torture break, not an public hanging. 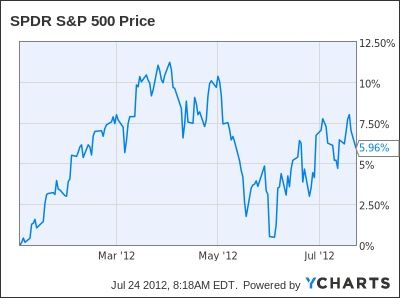 As the summer drones on, and the campaign rhetoric heats up, I don’t think it gets better. Clearly, both political parties are in different camps. Yesterday, Democrat Howard Dean said that he “hoped we went over the financial cliff” on CNBC. He speculated then we would do something.

The politicians can say what they want. We have spent so much money on stimulus that Virginia and Maryland seem insulated from any sort of financial crisis. However, this poll from heavily Democratic and blue collar Minnesota opened my eyes. At Ace, they said this,

if you look at the history of the state Presidential election returns, this is one of those BFD’s- the heavily blue collar, unionized part of the state, which went strongly for Kerry, Gore, Clinton, Dukakis, Mondale, Carter, McGovern, Humphrey, Johnson, Kennedy, Stevenson, etc is the only region in their poll going for Romney. Their regional sample isn’t a fluke- when asked about the Senate race the regions voters favor the Democrat by a twenty-two point margin, like it almost always has gone

Blue collar and middle class workers that rely on a healthy private sector are doing really badly. They don’t want to rely on government benefits to keep them out of trouble. They instinctively know a private sector job is much better for them. Recent stats have shown the top 1% of earners are doing badly too. Wealth has been destroyed in America over the last four years.

The destruction of the private sector economy isn’t totally Obama’s fault. But, the policies that his administration has prescribed, and the policies his administration wants to enact going forward do nothing to help the private sector. They are focused on growing the size and influence of government. Most average people in the United States know that when someone wants to grow the size of government, it never benefits anyone except the government.

If I was looking at a crystal ball going forward, I’d say the market continues to leak. Once election polls firm up in October, we will get direction. If Romney and the Republicans look like they will take control, the market will rally. If Obama keeps the White House, stagnation and mind numbing slow growth.