Building An Entrepreneurial Ecosystem, One Woman at a Time

Since I have gotten involved with building an entrepreneurial ecosystem in Chicago, I have done a lot of listening to people that either built, or are trying to build one somewhere else.

No matter what their political persuasion is, they all talk about government interference, or government involvement. The top thing they cite is that government shouldn’t be involved at all. Not in planning, directing, giving tax breaks or encouraging. Stay out of it.

They all say what government should do is keep taxes very low. Keep the streets clear and drivable, and make sure people have water to drink. They also think we need much better immigration policy. That’s about it. Entrepreneurs will take care of the rest.

The other phenomena they talk about is competition for talent. The start up community needs a lot of different human capital resources, but the most important one is engineering and programming. Virtually every business no matter what they focus on has some sort of tech piece that attaches itself to the business.

Looking at the businesses I have put money into over the past several years, they may not need hi tech in the production of the product, but they need it in their marketing. Win Detergent (winproducts.com) and Tallgrass Beef (tallgrassbeef.com) are both consumer products that are starting to figure out how to utilize the web to build a brand.

The competition for specific talent has made it easy for coders, programmers and engineers to find jobs. When one firm fails, they can hook on with another firm if there are enough firms around.

The essential building block of an entrepreneurial ecosystem then is to have enough computer geeks around, and enough start ups for them to work for. That’s why Silicon Valley continues to self perpetuate itself. It’s also why other areas of the country have had a hard time building an ecosystem.

I have had interesting conversations with entrepreneurs to get their opinion. One idea gets to the base of what it means to be human, and an unreported story amidst all the Groupon ($GRPN) publicity last week was how they attacked the problem.

Groupon hired good looking women to work there. This attracted the engineers. The old adage is “sex sells”. The simple fact is that most of the engineers on the planet are men, and most of the VC world is dominated by men. How do you attract most of the men? Women. Groupon figured that out and has had no trouble getting talent.

Chicagoans have been confounded by how Silicon Valley was built. They always point to the weather, which certainly is better. Or, they point to Stanford and its much better tech transfer policies compared to our midwestern universities. However, Boston and New York have not so hot weather, and they have a nice little tech industry. California, New York and Massachusetts have much more onerous tax environments than Illinois, so that’s not a reason.

It’s much cheaper to live here in the midwest. We have all the culture the coasts do, pro sports, and for five months out of the year we even have a usable beach.

Of course, if engineers from the coasts use the NFL as a guideline, they don’t see sideline shots with cheerleaders here since the Bears disbanded the Honeybears in 1986. 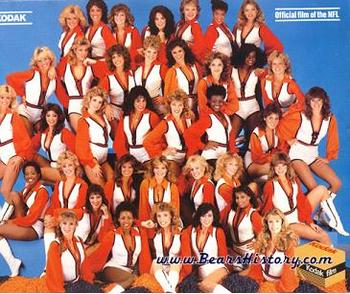 The capital is here. The will is here. We have some companies. We need to start highlighting our availability of women. I am here to tell you that there are a lot of women here in Chicago that would love to meet engineers. Pack your bags gentlemen, we are waiting.