Is Elon Musk a Capitalist or a Crony?

Jean Card
|
Posted: Dec 01, 2018 12:01 AM
Share   Tweet
The opinions expressed by columnists are their own and do not necessarily represent the views of Townhall.com. 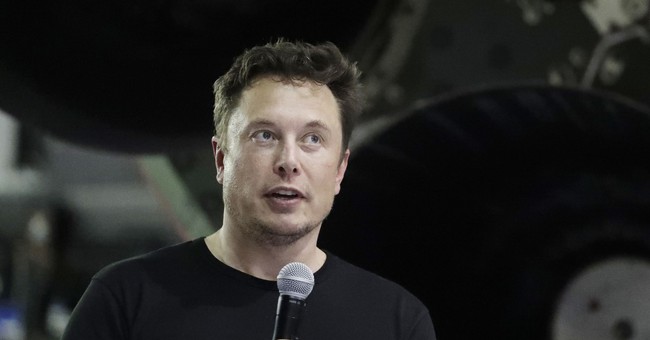 Much like the late, great physicist Stephen Hawking, Tesla CEO Elon Musk has become a fascinating cultural figure – a super-genius scientist whose observations and ideas are interesting and may be politically influential. Musk is probably right about Artificial Intelligence – specifically, the risks it poses to humankind and the importance of preparing ourselves to eventually compete with computers – and political leaders should pay attention. But Musk is wrong to be part of a new crony capitalist coalition lobbying for expanded tax perks for electronic vehicles (EVs). Republican leaders in Congress should ignore Musk on this issue when voting next week on tax extender legislation.

Ironically, EV tax credits are the antithesis of competition – a solution that Musk is embracing on the AI front. To prepare to combat the threats of AI, Musk started a neuroscience company that will find a way, through technology that works with our brains, to make humans competitive with computers. The goal, as Musk recently told Axios on HBO, is: “To achieve a sort of democratization of intelligence, such that it is not monopolistically held in a purely digital form by governments and large corporations.”

Underneath the nerdy language, this sounds great to me – Musk’s company is fighting for intelligence for the people. His brain tech will provide a way for us to hold our own in a fair intelligence battle against the “bigs” – big government and big business (including big social media).

I also like the way Musk sees a problem and takes it upon himself to solve it. To him, it is very clear that AI is a threat to humankind; he worries about a future where humans are pushed into the corners of our world by the superior intelligence of machines. It’s a scary picture, but here’s the important part: Musk won’t accept its inevitability. Like the hero in a science fiction movie, he is ardently on the side of the people, describing himself as “pro-humanity.” He wants our side to be in a fair fight, and to win.

Why not fight for the same thing – fair competition – when it comes to cars?

Musk actually did say, last year, that Tesla does not need the $7,500-per-vehicle tax credit – a gift from taxpayers to the wealthy people who buy EVs (78 percent of the credits are claimed by people who make more than $100,000 a year). He told his shareholders that Tesla’s “competitive advantage improves as the incentives go away.”

It is disappointing to see profitable Tesla join its less-successful EV competitors in an effort to broaden the EV tax credit, which blatantly interferes with competition and the free market by picking winners and losers at considerable taxpayer expense. The EV coalition that Tesla recently joined is calling for uncapping the credit (currently capped at 200,000 vehicles per manufacturer). According to the Joint Committee on Taxation, the existing credit alone is expected to cost $7.5 billion through 2022.

The world is still learning who Elon Musk is, and how he might influence our future. I suspect Musk is also learning – about who he wants to be in the political realm. My hope is that he stays true to his instincts on the side of competition and private-sector solutions to the world’s problems. His contributions could be a free marketeer’s dream-come-true. But in the mean time, Republicans in Congress should treat Tesla’s EV tax credit position as simply self-serving and say “no” to an expansion of this gift to elites. Musk has many of the characteristics and ideas of a great capitalist, but on this issue, right now, he’s just a crony.