A Southern Conservative's Response to the Alt-Right

Jason Pye
|
Posted: Aug 17, 2017 12:50 PM
Share   Tweet
The opinions expressed by columnists are their own and do not necessarily represent the views of Townhall.com. 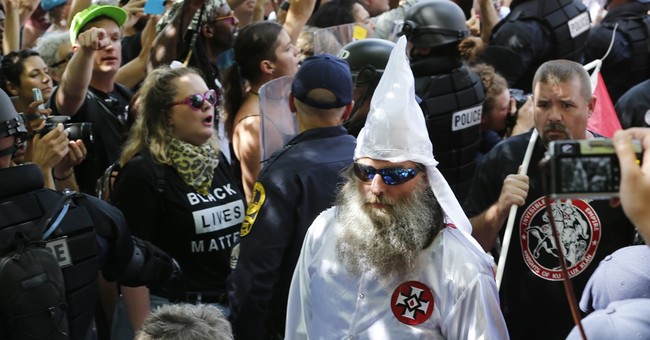 When I was young, my mother drove me through Jonesboro, Georgia, the seat of Clayton County and the setting of Margaret Mitchell’s book, Gone with the Wind. As she drove along South McDonough Street, I looked out the car window and noticed men in white hoods carrying the Confederate battle flag outside the county courthouse.

I was too young to really understand who they were and why they were there. When I asked my mother what I had seen, she said, “They believe white people are better than other races. Sometimes, they have parades and rallies, and they can be violent.” My mother raised me to respect everyone and treat them how I wanted to be treated. She rejected racism, and she taught me to do the same.

The sight in Jonesboro was the first and only time I would personally experience the white-hood wearing Ku Klux Klan. Unfortunately, the hate and prejudice that I briefly witnessed as a child still exists. Only today, most of these white supremacists don’t wear hoods, and they call themselves the “alt-right,” among other names. While they do protest in the open and occasionally meet in public, they predominately organize online.

Growing up in Georgia, where both sides of my family have roots dating back to the late 18th century, I’m keenly aware of the South’s history -- its secession from the Union prior to the Civil War and the disgusting Jim Crow-era -- and the attempts to revise that history. Thankfully, as a teenager, I surrounded myself with people who rejected racism and revisionist history.

The so-called “alt-right” has attracted a lot of attention. Sadly, they’ve been painted by some as a part of the conservative movement or an off-shoot of it. They’re not. Racism and hatred have no place in the conservative movement. Full stop. Although I subscribe to libertarianism, conservatives who I respect believe in free markets, free trade, limited government, and individual freedom for all people.

“Traditional conservatism...rests on the basis of God-given rights, personal responsibility, and limited government; traditional conservatism believes in e pluribus unum,” Ben Shapiro wrote a year ago. “Alt-right philosophy forcibly rejects virtually all of this: God-given rights accrue thanks to race-based European culture, personal responsibility only works when ethnoculture remains monochromatic (hence the alt-right’s rejection of personal economic responsibility when it comes to free trade), and limited government must be trashed in order to provide for the tribe.E pluribus unum is a fancy fiction, in the alt-right philosophy.”

“Their philosophy...is totally foreign to conservatism. It supposedly champions Western civilization, but in pretending to do so, it tears away at its most foundational principles in favor of a white tribalism that provides an ugly counterpart to the left’s racial divisiveness,” he added.

In addition to Shapiro’s observations, the terrifying scene in Charlottesville showed what the “alt-right” believes: hatred, violence, intimidation, and chaos. But this is nothing new. While the threat of Islamic extremism and terrorism is frequently discussed on Capitol Hill and cable news, and rightly so, those who represent most of the same unsavory viewpoints espoused by the white supremacists “are the second deadliest group of terrorists by ideology and account for 228 murders and 6.9 percent of all terrorist deaths,” according to Alex Nowrasteh of the Cato Institute.

White supremacy and fascism belong in the dustbin of history alongside the Confederacy, communism, and other politically and philosophically collectivist movements that subverted individual freedom.

Of course, we live in a society that protects free speech, including hate speech. But free speech is a two-way street. Those who wave banners of hate, such as the “alt-right,” have the right to do so. But those of us who believe in individual freedom have a responsibility to counter the voices of evil and hatred with a message promoting the truth that we are all created equally and have the same rights to life and liberty.