Sex Trafficking is a Volume Business, and the Superbowl is a Traffickers Dream

Jason Piccolo
|
Posted: Jan 31, 2020 12:01 AM
Share   Tweet
The opinions expressed by columnists are their own and do not necessarily represent the views of Townhall.com. 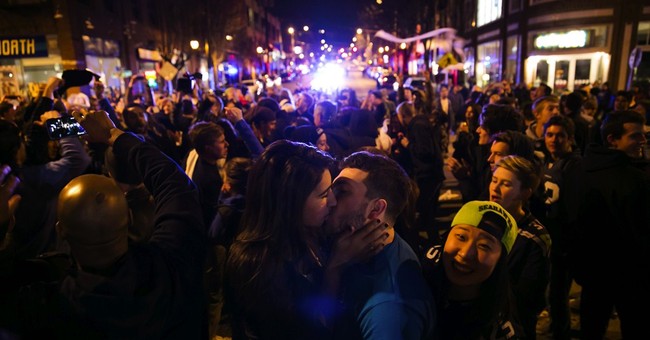 Last year almost a million people descended on Atlanta for the Superbowl. Expect those same numbers or higher for Super Bowl LIV in Miami this weekend. Entangled in the vast crowds of tourists are victims of sex trafficking. There is a concerted effort between law enforcement and civilians to rescue these victims.

Law enforcement officials, particularly the South Florida Human Trafficking Task Force, are deployed to the Superbowl with the mission of rescuing victims of trafficking as well as arresting the facilitators of this illicit trade. Like last Superbowl, federal agencies partner with the Trafficking Task Forces, including Homeland Security and the FBI. The FBI has already arrested two alleged traffickers in Miami this week.

The Task Force is not the only entity targeting traffickers during the Superbowl. Civilian non-governmental agencies with intelligence capabilities are also partnering with law enforcement in the pursuit of saving trafficking victims. One such organization, Deliverfund, is at the forefront of this effort. DeliverFund is made up of former special operators and intelligence officials with decades of experience in their craft. DeliverFund is top notch in providing counter-trafficking assistance to law enforcement through well-developed relationships and utilization of focused training.

To understand how trafficking at the Superbowl is different than other events, I reached out to DeliverFund’s Chief Operations Officer, Mike Fullilove, to learn more. Fullilove started by dispelling some common myths of sex trafficking at the Superbowl saying, “human trafficking is a ‘volume business.’ This means that in order to maximize profits, a trafficker must sell his or her product [victims] as many times as possible. With a massive influx of people to a major event like the Super Bowl, there is more potential demand. The lure of potentially increasing the profits by selling a victim at an increased frequency and price draws traffickers to these events.”

Fullilove further said, “If people are even aware of the issue [trafficking] and give it more than a passing thought, many think ‘it is probably a bunch of rich guys with eastern European women.’ The sad reality is that while that may occur, the significantly larger percentage of victims are American citizens being trafficked and purchased by other American citizens.”

Money is the name of the game for traffickers, and the Superbowl is a potential gold mine for criminals with a trafficker making over six-figures for the Superbowl alone. Fullilove broke it down for me, saying, “A good example is with $300/hour in the week leading up to the Super Bowl, a trafficker with only two victims can make upwards of $6000 per day or $42,000 in that week. It is not uncommon for a trafficker to have 4-6 victims which would give a trafficker potential earnings of $126,000. The average annual household income in America was only $89,930 in 2019!”

As tourists and locals converge on Miami, they should know what to look for when identifying traffickers and victims.  Mostly gone are the days of the big-fur coat wearing ‘pimp.’ The trafficker can now be a gang member, a young adult, and even a soccer mom. All these culprits are in it for money and, if not solely money, the power that comes with controlling another person. The victim is present near the trafficker, where they are controlled. The victim can have no means of escape because of factors such as fear, coercion, or physical control by the trafficker. Be mindful of destitution and the inability to speak on their own behalf.

I spent the better part of my twenty-year law enforcement career targeting criminal organizations as part of Homeland Security and know firsthand that DHS is deploying every available resource to combat trafficking at this year’s Superbowl. They are not in this fight alone, they have hundreds of law enforcement partners and civilian organizations, like DeliverFund, fighting traffickers before, during, and after the Superbowl.

Dr. Jason Piccolo (@DRJasonPiccolo) is a former Border Patrol Agent, Immigration and Customs Enforcement Special Agent, and Department of Homeland Security Supervisor. He is a former U.S. Army Captain (Operation Iraqi Freedom) and author of the recently released book Out of the Shadows: A Government Whistleblower’s Firsthand Account of How the Protection of Migrant Children Became A Political Firestorm.