Can Two Econ Profs from Chicago Take America’s Railroads Back to the Future?

Jared Whitley
|
Posted: Sep 10, 2020 12:01 AM
Share   Tweet
The opinions expressed by columnists are their own and do not necessarily represent the views of Townhall.com. 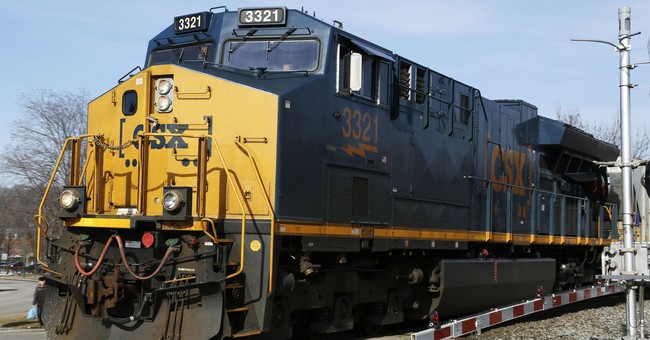 The status quo is probably the most powerful political force there is. The status quo can’t be vetoed, can’t be filibustered, and doesn’t go up for re-election. Once something is in place, it’s very difficult to change, especially the longer it’s been there and the more people benefit from that inertia. Indeed, as Isaac Newton said about inertia: An object at rest tends to stay at rest.

But staying at rest isn’t satisfactory when we’re trying to move forward.

That’s the attitude of Kevin Murphy and Mark Zmijewski, economic professors from the University of Chicago, who are trying to modernize the American freight rail industry. They’re authors of a petition to the Surface Transportation Board (STB), urging the board to change the way it calculates the financial health of the country’s railroads. The methods the STB uses are out of date and bad for business.

The STB regulates the railroads under a model called “revenue adequacy,” which arbitrarily sets limits on the rail industry’s rates. Namely, the Interstate Commerce Commission defined revenue adequacy as a rate-of-return on investment between 7 and 10 percent at a time (1979) when markets were being abused and competition was ineffective. Because free-market forces had been compromised, the government needed to step in, like when it breaks up a monopoly.

But that’s certainly not the case with rail today, so Murphy and Zmijewski are pushing the STB to update its model. Here’s to hoping they’re successful in their mission.

The biggest problem with the STB’s revenue calculations is it relies on accounting measures of ROI investment, rather than the current economic value of those investment assets. Billions of dollars of accumulated deferred taxes are removed from that investment base, distorting the figures.

Because virtually all industries earn accounting returns above the cost of capital, revenue adequacy is a normal outcome, not a sign of market power abuse that demands regulatory action like, say, a monopoly. Rather than looking backwards at what railroads have earned in a year, the STB should focus on what railroads must earn in the future to attract capital and pay for the capacity upkeep and meet future transportation needs.

Misguided regulation using outdated metrics will doubtless make the industry less attractive for investment and endanger the industry’s future. Indeed, when the Reagan administration lifted price controls on railroads and let the market set shipping rates – through the Staggers Rail Act – business boomed. Deregulation caused freight rates to fall by 45 percent, causing massive economic benefits. Shippers gained nearly $32 billion more in 1999 than they gained in 1984,  according to the Department of Transportation.

The Chicago professors offer some alternatives to the current revenue adequacy model.

Revenue adequacy is better thought of as a floor rather than a ceiling on their profits. While critics argue that revenue adequacy methodology proves that some railroads earn outsized monopoly profits, railroad performance is actually in line with other companies in the S&P 500, based on the professors’ research. Furthermore, gauging rail’s profitability just on its own is mendacious, as it must compete with the maritime, terrestrial, and air-freight industries – ones unburdened by the same restrictions placed on rail.

The current revenue adequacy model also measures profitability year by year, rather than over many years, which would be necessary to be meaningful. The rail industry (and almost everyone else) is having a terrible year now because of COVID, but will boom once life gets back to normal. Shouldn’t profits be amortized accordingly?

The STB would get a better view of railroads’ actual financial health if its gauge of revenue adequacy found whether railroads are earning ROIs over their cost of capital that are out of line from what a railroad’s peer in the S&P 500 typically earn, as 88 percent of the S&P 500 earn ROIs over cost of capital.

America’s railroads offer the most competitive shipping rates in the world, with average freight rail rates 43 percent less expensive in 2018 than they were in 1981, allowing for almost double the shipping, according to the Association of American Railroads. Competing with an increasingly powerful Chinese tiger, the U.S. economy must continue this kind of growth. Free from arbitrarily capped revenues, railroads can continue to invest to meet future demand. It’s even better for the environment than other forms of shipping.

Rail has been an integral part of America’s growth for the last 200 years, and should continue to be. Newton might say that railcars are objects in motion that need to stay in motion, or as Ronald Reagan said, “Where we’re going, we don’t need roads.”

Jared Whitley is a longtime DC politico, having worked in the US Senate, White House, and defense industry. He has an MBA from Hult International Business School in Dubai.