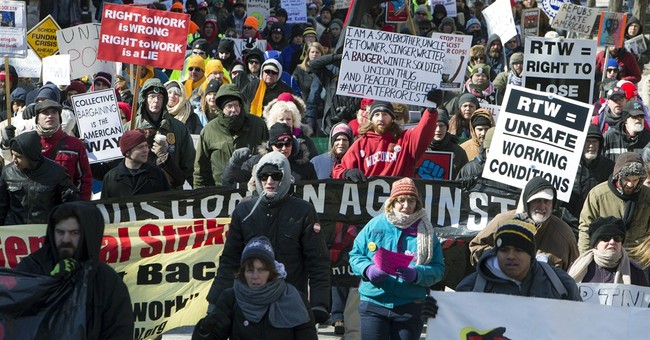 Unions are in trouble. Membership is declining, public pension plans are dangerously underfunded, and young workers are not interested in diverting a portion of their paychecks to dues that offer them few benefits in return. Half the states have passed “right to work” legislation that says that workers cannot be forced to join a union as a condition of employment. In the face of these challenges, the union membership rate has fallen to a 100-year low.

Membership rates continue to fall as traditionally unionized industries such as steel and textiles move offshore and younger workers choose the non-union sector. Only 4 percent of employed 16 to 24 year-olds are union members, and the membership rate for workers 25 to 34 years old is less than 10 percent. Union shops tend to value tenure over skill, and merit bonuses are nowhere to be found. Young workers are the first to be fired, even if they are more competent than experienced employees. Workers aged 45 to 64 have the highest union participation rate at 14 percent.

Given the costs of joining a union, it is unsurprising that unionization rates increase with age and few young people clamor to sign up. Younger workers already ask what that FICA tax is doing in their paychecks, and union dues add another 2 percent to 4 percent tax. United Food and Commercial Workers dues range from

Unions are required to file annual financial and membership data with the Department of Labor, and recently-released LM-2 forms show that unions continue to struggle to gain new members.

With union pension plans in such poor shape, young people see little value in having part of their paychecks go towards propping up what is essentially a Ponzi scheme. In 2014, the Department of Labor found that seven UFCW pension plans had reached “critical status”—meaning they are less than 65 percent funded. Some of these plans have been in critical status for seven years. Without a heavy influx of new members, these plans will be completely insolvent long before millennials retire. SEIU, AFL-CIO, and the Teamsters Union all also have plans that are in critical status.

One action that unions are not taking to get their finances in order is cutting pay to union bosses. At least ten UFCW bosses earn

When unions cannot attract new members based on the benefits they offer to workers, union bosses shift their attention to the political sphere. Even though union membership has been falling over the last half century, political contributions by unions have been moving in the opposite direction. Perhaps if dues went to benefit current workers, instead of politicians, wealthy retirees, and union bosses, unionization rates would not be falling so quickly.

Unions use some of these contributions for their strong opposition to Right to Work legislation. RTW restores workers’ rights to choose not to join a union as a condition of employment. This is a losing battle as 25 states now have RTW laws. To avoid losing business, other states will become RTW. Wisconsin was the most recent to join the ranks, following its neighbors Indiana and Michigan, and some counties in Kentucky have declared that they are RTW.

Many states are working to pass RTW because giving employees the freedom to not join a union attracts business and leads to higher economic growth. According to research by Ohio University professor Richard Vedder, from 1977 to 2012, RTW states saw an extra 11.5 percentage points in economic growth compared to non-RTW states. These results control for population growth and industry concentration.

If unions are to stay relevant in the 21st century economy, they need to adapt. Overtly focusing on buying legislatures is no way to do so. Millennials rightly see little value in the current offerings of union membership, but they are the very people needed to fix troubled union finances. It is time union bosses started focusing on young workers’ needs instead of their own.