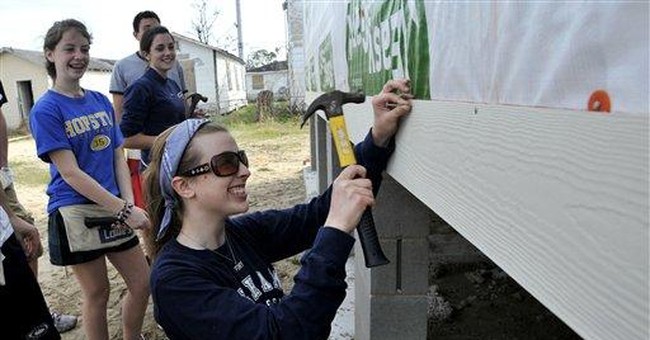 Last week here in Washington, researchers and policy analysts from around the nation met at a government-sponsored conference to discuss ways of promoting positive behaviors by youths and minimizing risky ones. Some of the presentations were painfully abstract and abstruse, nearly to the point of irrelevance, while others were direct, to the point, insightful, and genuinely interesting and relevant.

In short, the presentations reflected the changes taking place as new data and research expose the flawed foundation and failed results of the old radical theories and policies.

In the first session, a presenter summarized research findings that show overwhelmingly the numerous protective benefits to children who grow up in a home with married biological parents. Several participants immediately challenged the findings. Marriage as normative for child rearing? Never. The old guard was not about to let stand the idea that a healthy marriage provides a superior child rearing environment. No matter what the data show, some of the crowd insisted that other family arrangements could produce just as beneficial an environment. They even stooped to argue that if other alternatives had the same characteristics as a healthy marriage — a very big “if” — the results would be the same. Moreover, the radical left participants argued that not all marriages are healthy ones, a fact that was not in dispute. In this setting, no one dared breathe a word about the fact that marriage is the God-ordained means for providing for the needs of children.

Another presenter discussed an innovative preschool program that addresses the inability of problem children to control their social, emotional and cognitive behaviors. Particularly striking is the fact that current research shows that self-control has a stronger association with academic achievement than IQ or entry-level reading or math skills. The audience in general was captivated by the innovative techniques that demonstrated how children can successfully become “masters of their own behavior.” Rather than merely being guided or coerced into good behavior by a directive authority figure, the participating children engage in a variety of specifically designed, developmentally appropriate “self-regulation” activities that teach children how to focus and co-operate in order to achieve.

Not everyone was impressed by the program’s incredibly high success rates. One critic was “concerned” that when these youngsters developed discipline and self-control, they would never be able to “think outside the box” and that a generation of cooperating, self-regulating youngsters would mean the end of creative individualists like Einstein. This critic obviously had not spent any time trying to teach a classroom of unruly kids, nor did he embrace the teaching of the ancient truth: “He that hath no rule over his own spirit is like a city that is broken down, and without walls.” (Proverbs 25:28)

The last session of the day dealt with sexual behavior of adolescents and teens. When one of the presenters had the temerity to propose a sex education curriculum focusing on the relationship between self-sufficiency and abstinence-until-marriage, the audience got uncomfortably still. Nevertheless, the presenter bravely went on to argue for teaching that delayed initiation of sexual activity until marriage significantly improves life outcomes, financial well-being, sexual satisfaction and marital stability. This was more than one of the learned panelists could bear. As soon as the Q&A began, he was the first to ask to be recognized by the chair. Despite the obvious heat of his emotions, he employed a very measured approach and tone. He obviously had debated this topic many times; he implied and inferred a great deal while asserting very little — a technique designed to minimize rebuttal. His first line of attack on the teaching of abstinence was to question why we should be focusing on that one particular behavior rather than simultaneously addressing the many other risky behaviors that deserve equal consideration. Moreover, he inferred, while barely concealing his scorn, that focusing on the teaching of abstinence was “simplistic” — his code word for “ignorant” — by merely urging self-control in the face of an enormously complex set of factors which “influence” — his code word for “control” — young people’s behavior.

Fortunately, his smoke screen of inference and implication proved ineffective. It was met very effectively by an unlikely source; another hard-charging and learned academic simply presented data which showed that multi-faceted complex “interventions” of the type being proposed did not produce better outcomes than simpler ones.

Indeed, a growing body of findings from objective social science research is providing defenders of the truth with the ammunition they need to counter the phony ideologically-biased research that dominated policy discussions in the aftermath of the sexual revolution of the 1960s. While the radicals of the 1960s are still administrators of foundations, heads of leftist organizations and members of the tenured faculty of American universities — their remaining bastions of power — slowly, but steadily, these radicals are becoming more and more obsolete, like their enablers in the mainstream media.