The State of the Union Speech: Pomp and Tradition vs. Cultural Cacophony 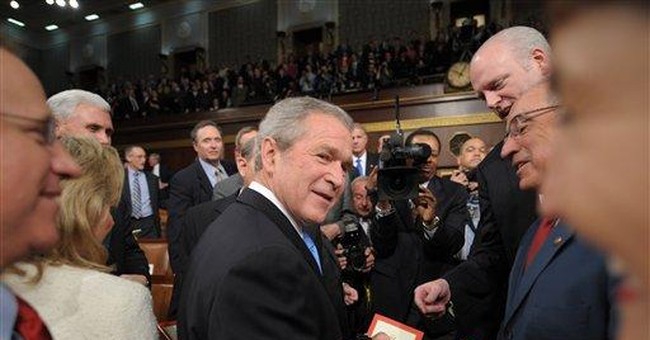 President Bush was obviously aware that his final State of the Union Address will shape not just his final year in office but will help to shape his legacy. His speechwriters began work on the speech text in early December (very unusual) and a final draft was ready more than a week ago (unheard of). The President spent a week practicing the speech to set the right tone for the remaining months of his term of office. The result was a confident, articulate and forceful delivery that we have rarely seen from President Bush.

His greatest challenge during the State of the Union address was to be heard above the cultural cacophony in America — fears about an economic recession, the still-simmering anger over the Iraqi war, the uncertainty in both parties over which candidate will get the party’s nomination, the President’s dismal approval ratings, polls that show the public thinks the state of the nation is only fair or poor, and the sense that this President’s time has come and gone.

Fortunately, the pomp and tradition of the annual State of the Union speech gave the President an opportunity to drown out the nation’s negativity about “now” by focusing on the future and what the President called his “sprint to the finish.” His themes — trusting and empowering the American people — were chosen to cement the two contrasting elements of his “compassionate conservatism.” While the repetitive theme became tiresome, it provided the motivation behind his efforts in the coming year to spread freedom and hope, make his economic stimulus package work and continue the progress of the surge in Iraq.

The language of the speech reinforced the President’s sprint imagery; he used words like “vigorous,” “determined” and “powerful.” There were memorable phrases — in describing his judicial nominees, he said they would “rule by the letter of the law, not the whim of the gavel.” He had humor — the IRS will accept checks and money orders for those who want to pay higher taxes. He countered the prevailing notion that the nation is in recession — jobs increased a record 52 straight months; the problem is more inflation than recession.

Social conservatives were happy to hear him reiterate his support for stem cell treatments that respect moral boundaries (“extending the frontiers of medicine without the destruction of human life”), stress the necessity for judicial nominees that abide by the Constitution, recommend continued underwriting of faith-based initiatives, push an end to wasteful spending, and promise to strengthen America’s competitiveness. The President can be forgiven for a bit of gloating over his decision about stem cells now that science has found a way for adult stem cells to mimic the adaptability of embryonic stem cells. As Christian conservatives often say, “We don’t have to fear scientific research; whether now or later, science will always affirm the Biblical choice.”

Fiscal conservatives (including most social conservatives) were happy to hear the President emphasize the necessity to cut wasteful spending, his commitment to veto appropriations bills that fail to cut earmarks in half, and his determination to nullify via executive order any earmarks not voted on by Congress. His immigration reform proposals included strengthening the nation’s borders, but he also included assimilation plans. The solution, he declared, must uphold “both our laws and our highest ideals.” He expressed a desire to see both Israel and Palestine established as free nations living in peace with each other and the rest of the world before he leaves office a year from now.

One of his most conservative proposals was for a form of school choice that he called, “Pell Grants for Kids.” This initiative would enable poor children to choose better schools rather than the “failing public schools” in their neighborhoods. He documented the success of his education initiatives (fourth- and eighth-graders have the highest math scores on record, and reading scores are up).

Ironically, the President’s very successful initiatives against malaria (which cut deaths in half in 15 African nations) were received with a yawn, while his AIDS outreach (committing another $30 billion) received a standing ovation. Equally ironic, he mentioned Zimbabwe and Darfur (previously not obviously on the Presidential radar), but did not mention North Korea. He made the case for the campaign against terrorists in Iraq and Afghanistan (“having come so far and achieved so much, we must not” lose ground now). He charged Congress with supporting our troops — staying the course — and taking care of our veterans.

The President echoed a phrase from a speech early in his presidency, that in carrying out the people’s business both he and Congress have a “charge to keep.” He asked both political parties to simultaneously “compete for votes and cooperate for results.” Sadly, Congressional liberals are already threatening his economic stimulus package. While there is still time to seal his legacy and his final State of the Union was an effective baby step in that direction, the President faces an uphill battle in adding to his Administration’s numerous accomplishments and in achieving the ambitious agenda that he set forth in the State of the Union address. Conservatives who helped put him in office will work with him on achieving our mutual pro-life, pro-marriage and pro-family goals. Conservatives will also work alongside him in his efforts to curb spending, appoint strict constructionist judges and protect American citizens. A lot can happen in a year; conservatives are happy to see him committed to our issues until the last hour of his last day in office.