Jane Robbins
|
Posted: Nov 30, 2016 12:01 AM
Share   Tweet
The opinions expressed by columnists are their own and do not necessarily represent the views of Townhall.com. 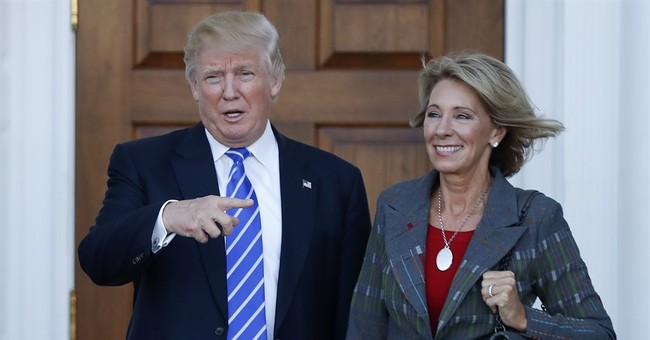 Jeb Bush suffered much criticism during the primaries for his longstanding support of the Common Core national standards. The conservative grassroots knew from the outset that position would kill his candidacy, and of course it did. Donald Trump discovered early on that his best applause line was to denounce Common Core and ridicule Bush for supporting it.

How ironic, then, that Jeb’s vision of education may triumph in a Trump administration after all.

Secretary of Education nominee Betsy DeVos claims to oppose Common Core as a “federalized boondoggle,” but what does this mean? Does she think Common Core is a high-quality set of standards that people would have welcomed if not for federal encouragement of their adoption? Significantly, she applauds former governors – John Engler, Mike Huckabee, Vice-President-elect Mike Pence – who advocated rebranding but not removing Common Core. Indeed, Pence achieved a rebrand in Indiana. By calling for “high standards” and “accountability” – both code words for Common Core – is DeVos signaling her approval of Pence’s sleight of hand?

DeVos also acknowledges that “organizations that I have been a part of [have] supported” the standards. This concession was necessitated by evidence from Michigan activists – and from Michigan Common Core proponents -- that DeVos-linked organizations defeated efforts to replace Common Core there. Especially active in defending Common Core was the Great Lakes Education Project, which DeVos actually founded, on whose board she serves, and to which the DeVos family has given over $1 million.

DeVos argues that she supports these groups’ advocacy of school choice but not Common Core. But the Trump transition team itself announced that Trump’s “discussion with [DeVos] was focused on the Common Core mission, and setting higher national standards . . . .” And even without this admission, it simply doesn’t make sense that DeVos would contribute boatloads of money to – and even lead -- organizations that actively push a policy with which she disagrees. Would a pro-life philanthropist write checks to Planned Parenthood because the abortion mill provides the occasional Pap test?

DeVos has frankly acknowledged that when she gives money, she “expects something in return.” It looks as though GLEP and other beneficiaries of her largesse gave her what she wanted – implementation of Common Core and all its attendant reforms.

Perhaps, though, DeVos really has now seen the light on Common Core. Perhaps she now recognizes that the standards lock children into an inferior education, as evidenced by stagnated or diminished student performance on national tests. If so, she should admit her error and commit herself to work vigorously to fulfill Trump’s promise to restore local control and end federal ties that bind states to Common Core.

But beyond Common Core, organizations DeVos has either funded or guided have used their influence to shape public-education policy in numerous other ways that trouble American parents. Understanding this process requires understanding DeVos’s philanthropic world.

Jeb Bush and his ideological compatriots, including DeVos, advance what could be called a “government-foundation cartel” model of educational policy-making. Private foundations funded by wealthy individuals (who themselves may be dilettantes with no real experience in education) contribute ideas, and frequently personnel, to the government to achieve their policy goals. The government relies on “research” funded by these foundations to support the preferred policies, and if Congress or state legislatures are involved, their members are assured these ideas are terrific because of all this research.

Frequently, though, foundation-supported schemes come out of federal and state executive agencies rather than elected bodies. This process neatly excises the American public from education policy and ensures that children will be guinea pigs for elitist experimentation.

As a prominent participant in the cartel, DeVos has not only donated to but served on the board of Bush’s education foundation, now called ExcelinEd. Most famous for pushing Common Core, ExcelinEd also advocates competency-based education and digital training rather than genuine teacher-led education. The foundation pushes sweeping collection and use of student data (advocating privacy legislation that doesn’t “unintentionally undermin[e] schools’ ability to provide students the personalized, high-quality education parents expect . . .” (translation: legislation that doesn’t place meaningful restrictions on government and corporate use of student data). ExcelinEd was a prominent booster of ESSA, the fed-ed bill by which the Republican Congress gave the Obama administration most of what it wanted.

DeVos also chairs the board of the American Federation for Children (AFC). Although AFC primarily advocates for school choice, it embraces “digital learning” (i.e., digital training), which increases children’s screen time and seriously threatens not only their brain development but their access to genuine education.

Perusing the papers and conferences sponsored by something called the Philanthropy Roundtable (PR) yields valuable insight into the mindset of the government-foundation cartel. PR members aren’t content to create private organizations and initiatives to improve conditions in their areas of concern; rather, they’re taught how to shape government policy to achieve their preferred ends.

PR also supports specific aspects of the progressive education agenda, including “blended learning” (digital training). It also has advised how to “seed” preschool programs that will help the government get toddlers out of their families and into institutional schooling.

Bush professed himself thrilled with DeVos’s “outstanding” nomination to be Education Secretary, and with good reason – he surely believes she’ll use the stratagems the cartel has employed for so long to impose its own vision of what American education should be. DeVos must instead assure the grassroots that she’ll use her new position to eliminate federal interference and truly return education policy to the states. Trump was elected to achieve that goal, not to install Jeb’s agenda. He should make sure DeVos understands that.