James Wanliss
|
Posted: Jan 21, 2016 11:11 AM
Share   Tweet
The opinions expressed by columnists are their own and do not necessarily represent the views of Townhall.com. 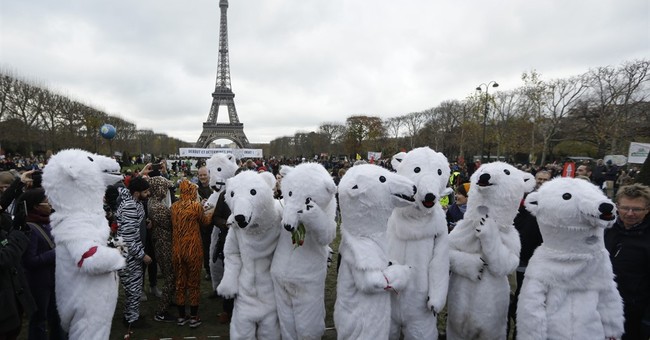 Each January many of us engage in a cultural phenomenon—we make New Year’s resolutions. This practice has ancient pedigree. At the start of each year ancient Babylonians resolved that they would return borrowed objects and pay their debts. Were they any better at keeping resolutions than we?

Looking forward has value because it enables us to imagine different circumstances and conditions. And once we’ve imagined the future we can set about to work towards it. We seek to enforce our predictions in the real world.

New Year’s resolutions also imply degrees of retrospection and reevaluation. Looking back is valuable, perhaps more so than looking ahead, because it enables us to learn from past success and failure and to apply those lessons to the future.

In December leaders of the nations of earth met in Paris. They gathered to deal with the greatest threat to world peace and the security of the planet. From the conference pictures it would appear that only the copious flow of haute cuisine was able to water down the fierce fires of anxiety on display whenever a leader spoke of the crisis.

Were they exercised by millions of invading immigrants tearing at the social fabric of their host nations? Was it the wars around the world, the unrest and violence overwhelming the Middle East and North Africa, the steady slow burn of global Muslim terrorism, global economic meltdown? Ebola?

None of these. The world leaders met to address the challenge of a world with a changing climate, a global warming due to the unprecedented production of atmospheric carbon dioxide.

The United Nations, which organized the meeting, summarized the main agreement reached: “The universal agreement’s main aim is to keep a global temperature rise this century well below 2 degrees Celsius and to drive efforts to limit the temperature increase even further to 1.5 degrees Celsius above pre-industrial levels.”

This is nothing less than a new year’s resolution, a pact to stop the world from catastrophic global warming.

The climate is real. It changes and shifts constantly. It is an intrinsic nonlinear system whose responses to inputs whether solar or terrestrial are rarely predictable with accuracy. It features powers subtle, intertwined, and most often far beyond our understanding. Yet the world leaders, self-styled as saviors of the planet, make resolutions as if they genuinely believe the climate of an entire planet could be created or controlled by a stroke of a pen. They seem genuinely oblivious to the absurdity of their resolution.

Now let’s have a reality check by looking into the past and the present. Reality has an unpleasant way of breaking through to the tone deaf. Just last October Muslim jihadists murdered over 100 and mutilated hundreds in Ankara, Turkey. Then a couple of weeks before the Paris climate summit Muslim jihadists murdered 130 in coordinated attacks across Paris. During the climate summit Islamic jihad came to San Bernardino, California where 14 were murdered and 22 mutilated.

Reality cuts through the noise. Jihad attacks led Al Gore to cancel a Paris webcast and glitzy concert to stimulate climate change consciousness. He said, “Out of solidarity with the French people and the City of Paris, we have decided to suspend our broadcast of 24 Hours of Reality and Live Earth.”

One can applaud Mr. Gore. Suspending his concert shows real sensitivity. Is it too much to ask him to no longer suspend reality about the climate?

The climate appears to pay little to no attention to the boundaries drawn in bold strokes of a Parisian pen. A gaping crater in the global warming fairytale is that earth’s temperature has not risen in the way computer-based climate models predicted; there has been no global warming at all from May 1997 to December 2015. This flies in the face of the New Year’s resolution made in Paris.

While human caused CO2 emissions have soared in the past two decades - thank you, India and China - temperatures are unchanged in any significant way.

The alleged link between anthropogenic CO2 emissions and global warming is now as tenuous as a snowball in the Sahara. It is clear today we don’t know what drives climate.

Perhaps we have clearer notions about what drives politicians. Possibly the only binding new year’s resolution made at the Paris summit was to have another summit real soon.