Law Enforcement Officers Are Not the Enemy

James Fotis
|
Posted: Jun 14, 2020 12:01 AM
Share   Tweet
The opinions expressed by columnists are their own and do not necessarily represent the views of Townhall.com. 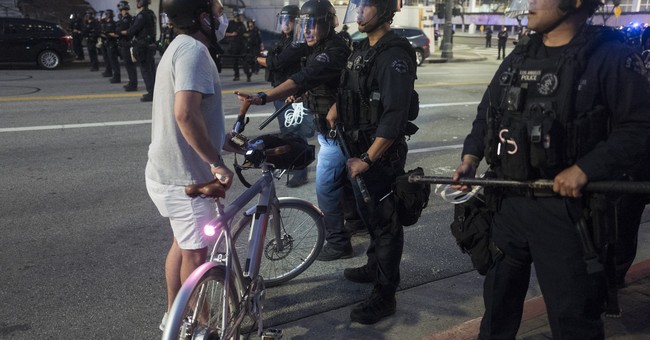 There is a war at home. In every city, courtroom, and District attorney’s office, the “generals” are deciding whether or not they will support their men and women on the frontlines or abandon them. The war against the women and men in blue will determine whether civilization and order are upheld or drowned by the mob in the streets.

As we sit at home contemplating the actions of ex-Officer Derek Chauvin, we need to remember that without law enforcement officers, America will not survive. Law enforcement officers protect and serve the people. That’s why they are present in every society from the Middle Ages until present day. Yes, there are always a few bad apples in the mix, which is true of every large organization. However, the Bureau of Justice Statistics in a 2011 article stated that out of 40 million civilian encounters, less than 1.3-1.4% ever result in an arrest or altercation, leading us to believe that the vast majority of police officers are good and took the job to help people no matter what their race, religion, or skin color is.

We’ve all seen the deeply troubling tape of Chauvin with his knee on George Floyd's neck on Memorial Day. However, we cannot delude ourselves into believing this kind of brutality is the standard, rather than the exception.

George Floyd has become a symbol: sanitized and whitewashed. The facts are Floyd went to prison multiple times, the last for shoving a gun in the belly of a pregnant woman in Texas during a home invasion. Chauvin has also become a symbol of his action. They were not pillars of society. A lack of calm pursuit for justice in the prosecution against police wrongdoings resulted in a myriad of peaceful protests, riots, looting, and destruction of local businesses. As a nation we must do better and restore America’s faith in law enforcement officers, we cannot allow underground money and agitators waiting for the right moment to destroy America and other world bastions of democracy.

Radicals are demanding that we “Defund Police Now!” — not thinking of the anarchy that would swiftly follow if they’re successful. Nancy Pelosi and the Democrats in the House of Representatives are trying to push legislation with massive law enforcement reforms that would hurt policing, empower drug dealers, and reverse the strong decline in crime over the last three years. The Democrats want to bind the hands of the police and handcuff justice forever by requiring police departments to send data on the use of force to the federal government and create a grant program that would allow state attorneys general to create an independent process to investigate misconduct or excessive use of force. This legislation, if passed, would make it easier for people to recover damages when police departments allegedly violate civil rights. In truth, it would stack the deck against the police, and justice.

Remember those in blue who are inherently standing up for good during the protests, riots, and in everyday life. Without police who are you going to call in any life-threatening situation? Life without laws and law enforcement is anarchy.

James Fotis is the President of the National Center for Police Defense, former Executive Director of the Law Enforcement Alliance of America and served for fourteen years as a Police Officer for the Lynbrook, New York Police Department, retiring as the highest decorated officer in the department's history.