State Rep. Jake Hoffman
|
Posted: Oct 05, 2019 12:01 AM
Share   Tweet
The opinions expressed by columnists are their own and do not necessarily represent the views of Townhall.com. 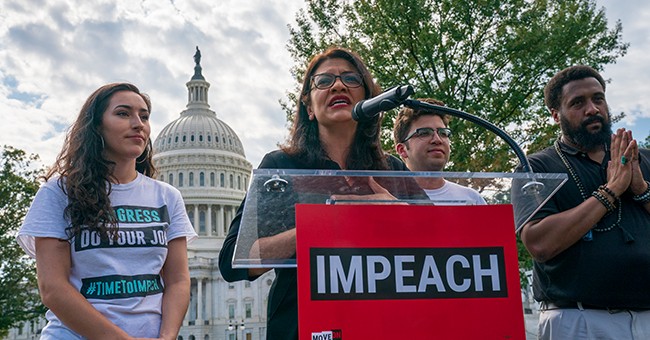 The American people are living through unprecedented times.  We are witnessing, as if spectators, an attempted coup unfold in real time on the daily and nightly news.  But make no mistake, the coup isn’t actually about Democrats hating President Trump.  Do they despise him, his demeanor, his success—of course; however, the coup that’s unfolding around us is driven by Democrats’ deep seeded hatred for you and me—the everyday, hardworking American.

You see, to Democrats, President Trump is the embodiment of middle America. Despite his wealth, fame, and celebrity, he represents the Iowa farmer, the Pennsylvania steel worker, the West Virginia coal worker, the Wisconsin teacher, and the Arizona small business owner.  He’s the conservative dad who comes home after an exhausting day of work and puts on Fox News. Donald J. Trump is the man who refuses to cower to media and east coast elites; instead taking them head on, never backing down and relishing every second of the fight.  Trump is you.

To understand that impeachment isn’t about Trump look no further than the Washington Post’s Inauguration Day headline ‘The Campaign To Impeach President Trump Has Begun.’   Despite having won the 2016 in an electoral landslide, Democrats have plotted and schemed how they were going to take down Trump. Democrats have trotted out phony stories, fake news, fabricated evidence and a series of hoax scandals to no avail.  Each attempt has fallen epically flat further destroying their credibility with the American people and fueling their descent into lunacy and desperation.

Consider that since the Democrats’ latest impeachment hoax President Trump’s approval rating amongst Republicans has swelled to a staggering 95% and hauled in over $125 million in third quarter fundraising—dwarfing even the best fundraising quarter this year amongst Democrat presidential hopefuls.  Equally as impressive, Trump continues to fill larger and larger stadiums and attract a more diverse coalition of support from key voter cohorts that Democrats can’t afford to lose.

Unsurprisingly, instead of seeing the President’s support and fundraising prowess as a sign that they’ve mistargeted their political calculus, Democrats have doubled down their attacks and increased the fever pitch of their media hyperbole.  I say unsurprisingly because they have to; they have no choice.

Trump’s plainspoken appeal to main street Americans is unrivaled by anyone on the left.  It’s clear to any objective observer that Trump resonates with regular Americans because he is one.  Democrats on the other hand have trotted what is effectively a clown car of candidates. From ‘Quid Pro Joe’ Biden who appears to have leveraged his political influence as Vice President; to enrich his family to the Elizabeth ‘Fauxahontas’ Warren who lied for years about being Native American so she could exploit affirmative action to land a nearly half million dollar a year ivy league professorship; to Kamala Harris who used her elitist liberal privilege to sleep her way to the top of California Democratic politics.   Every semi-sane Democratic candidate that dared to hold their own party accountable on the issues actual Americans care about like transportation infrastructure, jobs, illegal immigration, border security, national security, etc. were institutionally shut down and shut out of the primary process. The Democrats have exorcised any notion of putting Americans, or what the issues they care most about, from their Party’s belief system and candidate litmus tests.

Democrats at-large have ripped off the masks that they begrudgingly wore for the past half century to expose the extremism, hatred and anti-Americanism that exists at the core of their ideology. More importantly, Democrats have realized that the only way they can maintain their chokehold on power is to destroy the American system of government as it currently stands and replace it with a system without the same Constitutional protections for free will and freedom in general.

If we allow Democrats like Adam Schiff, Jerry Nadler, Nancy Pelosi and the bunch to undermine the foundational principles of American governance we are not simply risking the loss of one of the most effective policy presidents in American history, we are risking our entire concept of freedom and way of life.

At the end of the day, it is imperative that we recognize the motivations of our enemy.  Sure Democrats hate President Trump, but that’s not what’s driving them.  What’s fueling them is their hatred for your freedom, your faith, your guns, your prosperity, your family, your property, and at its most core level, their hatred for you.

Democrats aren’t after Trump, they’re after you.  He’s just standing in their way.