Jacob Sullum
|
Posted: Dec 07, 2016 12:01 AM
Share   Tweet
The opinions expressed by columnists are their own and do not necessarily represent the views of Townhall.com. 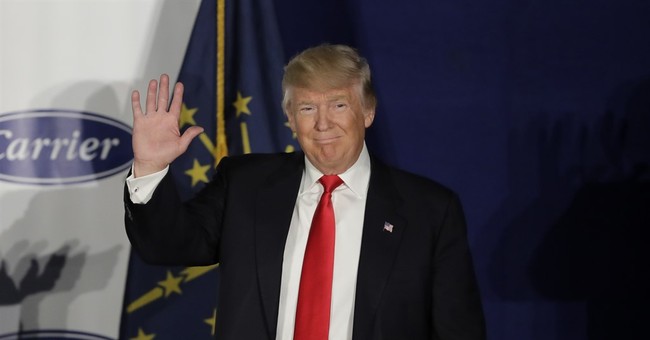 Trending
Last week Donald Trump had a nice telephone chat with Nursultan Nazarbayev, the autocrat who has ruled Kazakhstan since 1989, two years before it broke away from the Soviet Union. According to the Kazakh government, the president-elect "stressed that under the leadership of Nursultan Nazarbayev, our country over the years of independence had achieved fantastic success that can be called a 'miracle.'"

One aspect of the Kazakh miracle that Trump surely admires is Nazarbayev's ability to make criticism (and critics) disappear. As Trump's constitutionally contemptuous comments about flag burning illustrate, he supports free speech the same way he supports free trade: with preferential exceptions designed to protect the people he cares about most.

Trump thinks "nobody should be allowed to burn the American flag," notwithstanding two Supreme Court decisions saying such expressive activity is protected by the First Amendment. Both rulings were joined by Antonin Scalia, the late justice whom Trump says he wants to replace with someone similar.

Trump's call for jailing flag burners or stripping them of their citizenship may sound like the sort of knee-jerk patriotism that elevates a piece of cloth above the principles it represents. But in light of the fact that anti-Trump protesters in several cities burned flags after his election, attributing his position to mindless jingoism probably gives him too much credit.

Trump has a long, astonishingly petty history of using the legal system to punish people who offend him. In 1984, for instance, he sued Chicago Tribune architecture critic Paul Gapp for calling a Manhattan skyscraper proposed by Trump "aesthetically lousy" and "one of the silliest things anyone could inflict on New York or any other city."

The thin-skinned developer demanded $500 million in compensation for those insults, which seemed like a lot until he sought 10 times as much -- $5 billion -- in a 2006 lawsuit against Tim O'Brien, a financial journalist who had dared suggest that Trump was not worth as much as he claimed. Although Trump lost both of those cases, he recently told The Washington Post he got what he wanted from his suit against O'Brien: "I did it to make his life miserable, which I'm happy about."

Trump nevertheless thinks it should be easier for him to win lawsuits against people who say things he does not like. "We're going to open up those libel laws," he promised at a rally in February, "so when The New York Times writes a hit piece which is a total disgrace or when The Washington Post...writes a hit piece, we can sue them and win money instead of having no chance of winning because they're totally protected."

The president actually has nothing to do with writing libel law, which is done at the state level and is any case constrained by the First Amendment -- the source of the protection that frustrates Trump. His buddy Nursultan Nazarbayev has no such problem.

In Kazakhstan, the State Department notes, libel is a crime as well as a tort, defendants are required to prove the accuracy of any challenged statement, and "the law provides enhanced penalties for libel against senior government officials," who use the threat of defamation claims "to restrict media outlets from publishing unflattering information." Another aspect of Kazakh law that should appeal to the notoriously sensitive and secretive Trump: "The law prohibits insulting the president or the president's family" and "criminalizes the release of information regarding the health, finances, or private life of the president."

Trump, who argues that "it is not 'freedom of the press' when newspapers and others are allowed to say and write whatever they want even if it is completely false," might also be intrigued by the Kazakh law that makes "intentionally spreading false information" a crime punishable by stiff fines and up to 10 years in prison. But before he comes out in favor of such a truth-promoting initiative, he probably should consult a lawyer about his own potential liability.