Jacob Sullum
|
Posted: Jun 01, 2016 12:01 AM
Share   Tweet
The opinions expressed by columnists are their own and do not necessarily represent the views of Townhall.com. 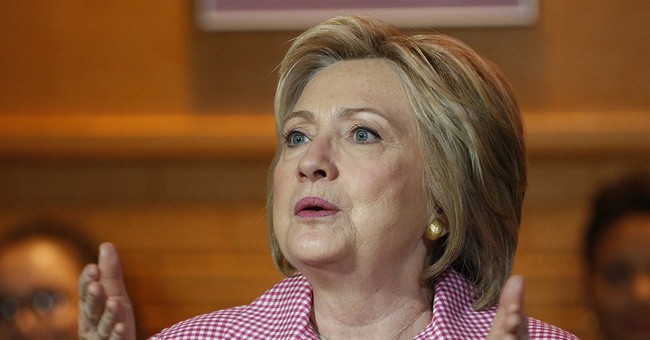 Trending
The last time she lived in the White House, Hillary Clinton was in charge of a health care task force that met in secret under a veil of lies. That episode highlighted the haughtiness, deceit and disdain for transparency that continue to cause trouble for the presumptive Democratic presidential nominee, as illustrated by the recent inspector general's report on her email practices as secretary of state.

When President Bill Clinton picked his wife to chair the Task Force on National Health Care Reform in 1993, critics sued the first lady, arguing that her participation made the task force subject to the public-meeting and open-record requirements of the Federal Advisory Committee Act. The administration successfully argued that Clinton, who was not a government employee, nevertheless should be counted as one in this context, making the transparency requirements inapplicable.

There remained the issue of the working groups advising the task force, which supposedly consisted entirely of government employees. That turned out to be a lie.

In 1997 -- three years after the Clinton health care plan was defeated, in no small part because of the perception that it had been written behind closed doors without public input and debate -- U.S. District Judge Royce Lamberth rebuked the administration for its "outrageous" and "reprehensible" deception concerning participants in the working groups, many of whom were private parties with a stake in the outcome. ''The executive branch of the Government, working in tandem, was dishonest with this court,'' he wrote. "It is clear that the decisions here were made at the highest levels of Government."

Lamberth had previously criticized Clinton et al.'s "preposterous," "incomplete" and "inadequate" responses to the plaintiffs' requests for relevant information, which had made the discovery process "difficult, drawn-out, and contentious." He ruled that the defendants had "improperly thwarted plaintiffs' legitimate discovery requests" by raising "meritless" objections.

Two decades later, Clinton's old habits of entitlement and obfuscation are coming to the fore again. "Voters just don't trust her," The New York Times notes, citing a recent survey in which 64 percent of respondents said Clinton is not "honest and trustworthy." Her response to the email controversy shows why.

When Clinton was appointed secretary of state, the report from the State Department's inspector general says, departmental policy clearly stated that officials should avoid using private email services for work. Clinton decided that rule, which was aimed at promoting security and the preservation of records, did not apply to her, and throughout her tenure she relied exclusively on a personal email system, communicating via a server in the basement of her house in Chappaqua, New York.

Although Clinton has repeatedly claimed this arrangement was "allowed by the State Department," the inspector general's report says she never sought approval and would have not have received it if she had. Yet even after the report came out, Clinton told ABC News her use of a personal email account "was allowed."

The report says Clinton also broke the rules by failing to surrender her official correspondence prior to leaving the State Department. She did not do so until nearly two years later, and even then many messages were missing, including everything from her first few months as secretary of state. Clinton's campaign nevertheless claims "she took steps that went much further than others to appropriately preserve and release her records."

Clinton also is less than forthcoming in discussing her motivation for using private email. She says it was a matter of convenience. Yet in 2010, when an aide urged her to use the State Department system instead, she replied that "I don't want any risk of the personal being accessible."

Around the same time, the report says, two employees of the State Department's Office of Information Resources Management broached the subject, and their boss "instructed the staff never to speak of the Secretary's personal email system again." No doubt Clinton wishes she could issue the same order to the rest of the country.