Jacob Sullum
|
Posted: Mar 09, 2016 12:01 AM
Share   Tweet
The opinions expressed by columnists are their own and do not necessarily represent the views of Townhall.com. 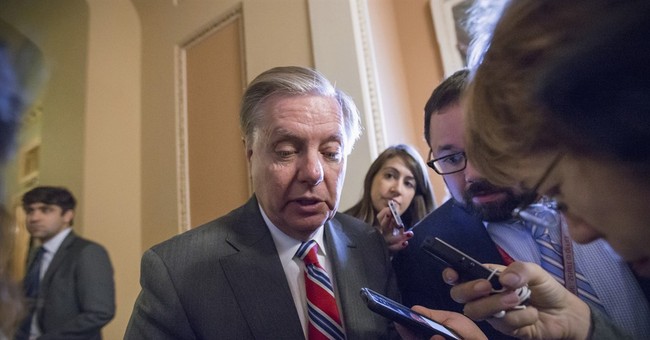 Trending
Last week, 117 "members of the Republican national security community" signed an open letter condemning Donald Trump. It made me think the bellicose billionaire, the front-runner for the Republican presidential nomination, is not quite as bad as I thought.

"His vision of American influence and power in the world is wildly inconsistent and unmoored in principle," the letter complains. "He swings from isolationism to military adventurism within the space of one sentence."

Although there is some truth to that critique, an inconsistent skepticism of foreign intervention is better than none at all. That is why I have trouble agreeing with Eliot Cohen, the neoconservative foreign policy expert who organized the letter, when he says "Hillary is the lesser evil, by a large margin."

It is not surprising that Cohen, who always seems to be agitating for another war in the Middle East, would strongly prefer Hillary Clinton, the presumptive Democratic nominee. Her signature achievement as secretary of state was a disastrous intervention in Libya that, like the U.S. invasion of Iraq, empowered terrorists by replacing a nasty dictatorship with chaos.

In 2014, Clinton finally conceded that she made a mistake by supporting the Iraq war, which killed as many as 189,000 people and may ultimately cost as much as $6 trillion. That long-delayed admission suggests Clinton might see the light about Libya sometime around 2022, by which point she could be halfway through her second term as president -- plenty of time for new mistakes, starting with Syria.

Trump, by contrast, was an early opponent of the Iraq war, although not quite as early as he sometimes claims. "In 2003, 2004, I was totally against going into Iraq," he said during the Republican presidential debate on December 15. "I called it very strongly."

The truth is that Trump expressed tentative support for the Iraq war six months before the invasion and did not publicly change his mind until four months afterward. Still, he beat Clinton by a decade, and it seems significant that he condemns the war as often and as strongly as he does.

"George Bush made a mistake," Trump said during the February 13 GOP debate. "We should have never been in Iraq. We have destabilized the Middle East ... They lied. They said there were weapons of mass destruction. There were none."

Trump applies a similar critique to the ouster of Libyan dictator Muammar al-Qaddafi (which he also initially supported) and the proposed toppling of Syrian dictator Bashir al-Assad. "Assad is a bad guy, but we have no idea who the so-called rebels [are]," he said during the November 10 GOP debate. "They may be far worse than Assad. Look at Libya. Look at Iraq."

The beginning of wisdom in foreign policy is learning from mistakes, something that Clinton, who is supposedly much more sophisticated about such matters than Trump, has proven constitutionally incapable of doing. Unlike Clinton, Trump intermittently seems to recognize the limits of American power and the impossibility of doing just one thing in a world full of complexity and unintended consequences.

But only intermittently. The same candidate who cautions against getting involved in civil wars thousands of miles away, who says "we can't continue to be the policeman of the world," and who rightly wonders why the U.S. continues to defend wealthy European and Asian countries that are perfectly capable of defending themselves also talks about the supposed need to make the military "bigger, better, stronger than ever before."

I'm not sure what Trump wants to do with this bigger, better, and stronger military, although it may have something to do with his promise to "get rid of ISIS," a campaign he says will include waterboarding and torture methods "a hell of a lot worse" as well as the murder of terrorists' families. Also troubling: Trump's tendency to view trade as warfare and immigration as an invasion.

It really says something that Clinton has shown herself to be a worse warmonger than this guy.