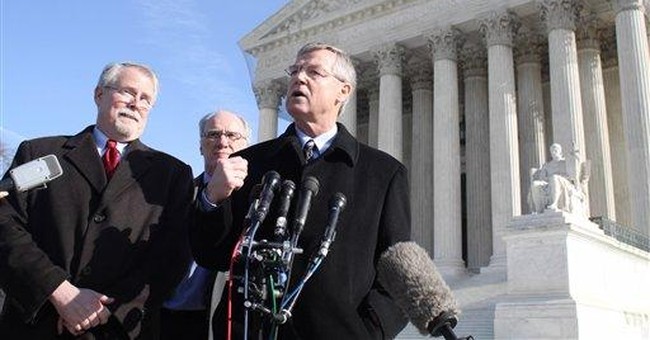 "This ruling strikes at our democracy itself," President Obama declared on Saturday. "This ruling opens the floodgates for an unlimited amount of special interest money. ... I can't think of anything more devastating to the public interest."

The president was referring, of course, to the Supreme Court decision that last week overturned restrictions on political speech by corporations. Like most of the criticism provoked by the ruling, his reaction was long on outrage and short on constitutional interpretation.

Which is weird, because the Court was interpreting the Constitution -- in particular, the part that says "Congress shall make no law ... abridging the freedom of speech, or of the press." It is hardly a leap to conclude that Congress violates this injunction when it passes a law that, as in this case, prohibits an activist group from distributing or advertising a documentary close to an election because the film portrays a candidate in an unflattering light.

The closest that critics of the decision came to a constitutional argument was their claim that the First Amendment was meant to protect the rights of individuals, not the rights of corporations. As a New York Times story put it, they argued that the Court "committed a grave error in treating corporate speech the same as that of human beings."

For the record, I think intelligent extraterrestrials residing in the United States would be covered by the First Amendment. I am less sure about self-aware robots. But since the corporations at issue in this case are created and run by human beings, the Court did not need to address those issues. As Justice Antonin Scalia noted in his concurring opinion, "The individual person's right to speak includes the right to speak in association with other individual persons."

The 1990 precedent that the Supreme Court overturned in this case was based on the premise that the government has a legitimate interest in preventing "the corrosive and distorting effects of immense aggregations of wealth ... that have little or no correlation to the public's support for the corporation's political ideas."

Yet the vast majority of corporations do not enjoy "immense aggregations of wealth" -- they are either small businesses or nonprofit organizations like Citizens United, the conservative group that brought this case. Furthermore, the anti-distortion rationale would allow censorship of rich individuals as well as newspapers, TV shows, websites and books, since these are all produced by wealthy corporations.

Instead of addressing the merits of this dangerously misguided precedent, critics of last week's decision, like censors throughout history, worried that freedom of speech would have bad consequences. "It gives the special interest lobbyists new leverage to spend millions on advertising to persuade elected officials to vote their way -- or to punish those who don't," Obama warned. "Any public servant who has the courage to stand up to the special interests and stand up for the American people can find himself or herself under assault come election time."

It was a bit rich for Obama to bemoan the influence of "special interests" the same week Massachusetts voters expressed their anger over bailouts he enthusiastically supported, the week after he cut a deal that exempted union members from a tax everyone else would have to pay, around the same time he was bragging about a spending binge that has stimulated lobbying more than the economy and in the midst of his attempt to salvage health care legislation backed by big corporations.

In any case, democracy is a clash of interests, which we call "special" when we don't like the policies they support, and the election-time "assault" of Obama's nightmares is nothing more than public criticism of politicians.

Obama and other supporters of restrictions on political speech believe voters can't handle clashing versions of the truth, that they need to be shielded, in the name of democracy, from messages that would otherwise mesmerize them into doing the bidding of "powerful interests." The Framers thought otherwise, and that's why we have the First Amendment.