A Promise Worth Breaking 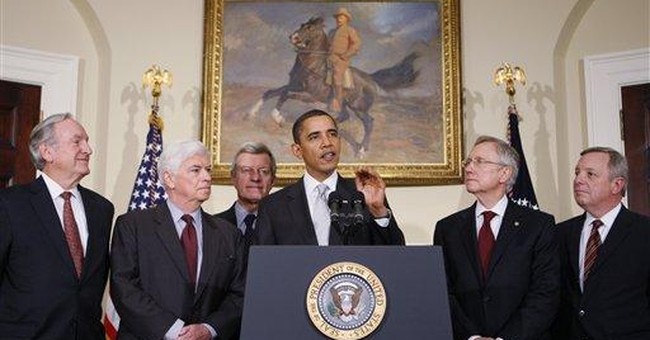 President Obama's proposed tax on especially expensive medical benefits, which he last week agreed to modify in response to complaints from labor unions, breaks at least three of his promises. It still may be the best aspect of a health care plan that otherwise does little to control costs, ostensibly one of Obama's main goals.

As approved by the Senate, the 40 percent excise tax applies to medical coverage costs above $8,500 a year for individuals and $23,000 for families. Although those cutoffs currently are far above average, they would rise more slowly than insurance premiums, and the Joint Committee on Taxation (JCT) estimates the tax would affect nearly a quarter of Americans with employer-provided coverage by 2019.

This bracket creep is a feature, not a bug, because the aim is to reduce the incentive that encourages employers to provide tax-free medical benefits instead of higher wages. The more people are covered through work, and the more generous their coverage, the more they are insulated from the costs of their health care choices, a situation that impedes competition and feeds inflation.

Obama's excise tax would nibble at the edges of this problem by encouraging employers to cut back on the most expensive health plans and shift the money they save to wages. In fact, the JCT projects that more than 80 percent of the money raised through this provision during its first decade would come not from the excise tax itself but from taxes on higher wages.

Which brings us to Obama's broken promises. While running for president, he repeatedly vowed not to raise taxes on families earning less than $250,000 a year. Yet the JCT's numbers indicate that most of the money raised by the excise tax would come from households in that income group.

Yet the premise of the excise tax on "Cadillac" medical benefits is that some employer-provided health plans, because of their tax-free status, are excessively generous, making consumers less cost-conscious than they otherwise would be. If it did not succeed in shifting people to different health plans -- which might mean higher copayments, higher deductibles and/or less comprehensive coverage -- it would be a failure.

Finally, during his campaign, Obama vowed to "change the way business is done in Washington" by eschewing special-interest lobbyists. Yet the deal he struck last week with the unions was a blatant payoff to supporters whose interests diverge from those of the general public. In addition to raising the excise tax thresholds, the compromise allows government employees and union members to escape the tax for five years longer than everyone else.

Since those employees are especially likely to have the "gold-plated" medical benefits at which the tax is aimed, the exemption further undermines what was already a timid, needlessly complicated attempt to deal with one of the health care system's central problems: the separation of consumption from payment. A better approach would be to make all medical benefits taxable while cutting tax rates or providing offsetting credits -- something like what Obama's Republican opponent suggested in 2008.

Obama condemned John McCain's proposal, warning, "For the first time in American history, he wants to tax your health benefits." But that was the same speech (the same paragraph, in fact) in which Obama made his "firm pledge" that "no family making less than $250,000 will see their taxes increase." In the health care debate, Obama's habit of reversing himself could turn out to be a blessing.