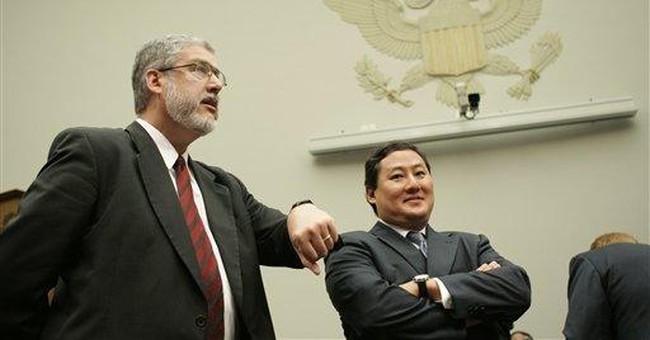 Justice Department memos released last week paint a picture of a post-9/11 America where the military censors, searches and seizes people at will. Explaining why he sought to rationalize something akin to martial law, John Yoo, the memos' main author, says he was asked "unprecedented questions under the most severe time pressures" during a period when many people feared more terrorist attacks were in the offing.

Yet civil liberties do not mean much if they are abandoned whenever the government thinks it has a good reason to violate them. It is precisely in times of crisis, when politicians are most tempted to take legal shortcuts and the public is most inclined to go along, that constitutional protections are most needed. Although Attorney General Eric Holder claims to understand this, his embrace of Yoo-like rhetoric and reasoning suggests his differences with the former Office of Legal Counsel (OLC) lawyer may be a matter more of circumstance than of principle.

In a March 7 Wall Street Journal op-ed piece, Yoo, now a Berkeley law professor, says the recently released memos, which were written in 2001 and 2002, were part of an effort "to plan for worst-case scenarios." But his argument that the military could pursue terrorists domestically without regard to the Fourth Amendment's guarantee against unreasonable searches and seizures did not hinge on additional attacks, let alone a situation resembling invasion or open warfare. It was an invitation to reclassify all terrorism-related law enforcement activities as matters of national security and hand them over to the Pentagon, thereby avoiding inconvenient constitutional constraints.

In an October 2001 memo, Yoo and OLC lawyer Robert Delahunty suggested that if the military does something, even something that looks like police work, it is ipso facto a military operation, not a criminal investigation. "Our forces," they said, "must be free to 'seize' enemy personnel or 'search' enemy quarters, papers and messages without having to show 'probable cause' to a neutral magistrate, and even without having to demonstrate that their actions were constitutionally 'reasonable.'"

As Yoo sees it, if the Defense Department searches Americans' homes, reads their mail or listens to their phone calls, it is not carrying out an investigation; it is waging the War on Terror. "If the government's heightened interest in self-defense justifies the use of deadly force," Yoo wrote in a September 2001 memo, "then it certainly would also justify warrantless searches."

Likewise, according to Yoo, the military must be free to indefinitely detain anyone suspected of involvement with terrorism, including U.S. citizens arrested on U.S. soil, and neither Congress nor the courts have any business imposing limits on such detentions or dictating how the prisoners should be treated. In a gratuitous and therefore revealing aside, Yoo and Delahunty suggested that censorship aimed at defeating terrorism would be legal, too, since "First Amendment speech and press rights may also be subordinated to the overriding need to wage war successfully."

The Obama administration is not likely to go as far as Yoo did in asserting the president's unilateral, unconstrained authority to fight terrorism. The courts have rejected key aspects of Yoo's position, and the OLC itself renounced some of his more alarming claims (rather belatedly -- just five days before George W. Bush left office).

Yet Attorney General Holder has endorsed Yoo's view that the U.S. is engaged in a never-ending, omnipresent War on Terror that justifies extraordinary measures such as preventive detention. He also has continued the Bush administration's efforts to suppress lawsuits related to rendition and warrantless wiretapping on state secrecy grounds.

The day he released the OLC memos, Holder said viewing the fight against terrorism as "a zero-sum battle with our civil liberties" is "misguided." I'm not sure about that. There is a tradeoff here, but it is better understood as a tradeoff between the dangers of terrorism and the dangers of tyranny. The Obama administration should be judged by how well it strikes that balance.