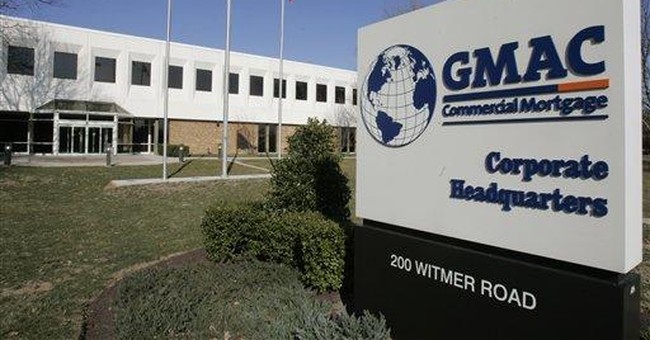 Last week, the Treasury Department bought a $5 billion stake in GMAC as part of a plan to transform the lender, formerly the financial arm of General Motors, into a bank holding company. The New York Times reported that GMAC wanted to become a bank mainly so it could be considered a "financial institution" and thereby qualify for money from the $700 billion Troubled Asset Relief Program.

Yet the Treasury used TARP funds to invest in GMAC. In other words, if the Times has the story right, GMAC received TARP money so it could be eligible for TARP money.

This paradox highlights the lawlessness of the Bush administration, which has ignored statutory restrictions on TARP and treated it as a slush fund for politically favored supplicants. Although he has criticized President Bush strongly for flouting the law and exceeding his constitutional powers, President-elect Barack Obama has applauded the latest manifestation of that tendency.

GMAC, which lends money to car dealers and buyers and also has dabbled disastrously in mortgages, has been bleeding billions for more than a year. In November, when it asked the Federal Reserve Board for permission to become a bank, the decision was based largely on the understanding that only financial institutions could receive help from TARP.

That was the Treasury's position, and it's not hard to understand why. The Emergency Economic Stabilization Act, which created TARP, authorized Treasury Secretary Henry Paulson "to purchase, and to make and fund commitments to purchase, troubled assets from any financial institution," the aim being "to restore liquidity and stability to the financial system."

But by the time the Federal Reserve approved GMAC's application, Paulson had decided that GM and Chrysler, which make not loans but cars, nevertheless could receive $17.4 billion from TARP to tide them over until Congress approved more aid. His epiphany about the meaning of the TARP law came immediately after Congress declined to approve emergency short-term assistance for the carmakers.

"While the purpose of (TARP) and the enabling legislation is to stabilize our financial sector," Paulson said, "the authority allows us to take this action. Absent Congressional action, no other authorities existed to stave off a disorderly bankruptcy of one or more auto companies."

To Paulson's mind, a "disorderly bankruptcy" of GM or Chrysler was unthinkable. Though Congress had not authorized a bailout of the automakers, he decided to pretend it had.

Under Paulson's new interpretation of the law, a "financial institution" is whatever he says it is. Having decided that carmakers qualify, the Treasury last week declared that businesses tied to carmakers, such as parts suppliers, also can be covered by TARP.

In fact, the official rationale for the GMAC bailout, which included another $1 billion for GM to help it buy equity in the new bank holding company, was not GMAC's restructuring but its role in "a broader program to assist the domestic automotive industry in becoming financially viable." As far as Paulson is concerned, TARP aid to a money-losing lender is justified not by its relationship to restoring the financial system's liquidity and stability, the purpose for which Congress created TARP, but by its relationship to helping carmakers, a purpose not covered by the law that authorized the program.

You might think Obama -- who proudly told The Boston Globe a year ago, "I reject the view that the president may do whatever he deems necessary to protect national security" -- would have something to say about the misuse of TARP. He does. He likes it.

Obama endorsed Paulson's illegal loans to GM and Chrysler, saying they were "a necessary step to help avoid a collapse in our auto industry that would have devastating consequences for our economy and our workers." Evidently, Obama opposes only the unnecessary abuse of executive power. All the debate over what form the Obama-backed stimulus package should take may be pointless because our next president seems to think he may do whatever he deems necessary to protect economic security, no matter what Congress says.