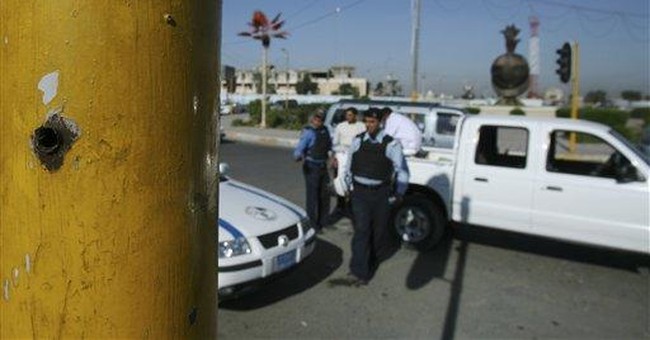 In January 2007, Rep. David Price introduced a bill that would have applied American criminal law to all government contractors who commit felonies while working in areas where U.S. forces are operating. "If we do not hold contract personnel accountable for misconduct, as we do for our military," the North Carolina Democrat said, "we are undermining our nation's credibility as a country that upholds the rule of law."

But in the case of the guards who killed 17 civilians in Baghdad's Nisour Square last year, holding contract personnel accountable for misconduct may be incompatible with the rule of law. That's because the law they are accused of violating does not apply to them.

A federal indictment unsealed this week charges five former employees of Blackwater Worldwide, hired by the State Department to provide protection services in Baghdad, with 14 counts of voluntary manslaughter, 20 counts of attempted manslaughter and one count of discharging a firearm while committing a violent crime. A sixth guard, Jeremy Ridgeway, has pleaded guilty to manslaughter.

The men were part of a convoy that left Baghdad's International Zone, where the U.S. embassy is located, around noon on Sept. 16, 2007, in response to a report that a car bomb had exploded near a Blackwater detail about a mile from Nisour Square. After the convoy entered the square and created a roadblock, Blackwater employees opened fire on a white Kia sedan approaching the traffic circle from the south. At least six guards then fired rifles, machine guns and grenades at various targets, killing 17 people and injuring 20.

Although the guards said they were responding to an ambush, investigations by the Iraqi government, the Pentagon and the FBI found no evidence that anyone else fired weapons during the incident. The FBI concluded that three of the fatal shootings might have been justified by a mistaken fear of imminent attack, but the rest were not. According to Ridgeway, members of the convoy made "no attempt to provide reasonable warnings" to the Kia driver, and "turret gunners in the convoy continued to fire their machine guns at civilian vehicles that posed no threat."

Such actions do appear to qualify as voluntary manslaughter, defined by federal law as "the unlawful killing of a human being without malice ... upon a sudden quarrel or heat of passion." The problem is that U.S. criminal law generally does not apply in foreign countries.

The Military Extraterritorial Jurisdiction Act (MEJA), the 2000 statute under which the Blackwater guards are charged, covers people "employed by or accompanying the Armed Forces outside the United States," including Defense Department contractors. But Blackwater was hired by the State Department.

The Congressional Research Service says, "MEJA does not appear to cover civilian and contract employees of agencies engaged in their own operations overseas." The Congressional Budget Office agrees, stating flatly, "employees of security contractors working for the Department of State would not be subject to MEJA."

A 2004 amendment expanded MEJA's coverage to include contractors hired by other agencies "to the extent such employment relates to supporting the mission of the Department of Defense overseas." But from the context in which the amendment was passed, it's clear the intent was to cover civilians who work for the Pentagon under contracts arranged by other departments, such as interrogators at the Abu Ghraib prison who were officially hired by the Department of the Interior. If the amendment's authors had wanted to cover all contractors in areas of military activity, they easily could have done so, as Price's 2007 bill shows.

The obvious solution is to prosecute the former Blackwater employees under Iraqi law. But an order by the provisional government created after the U.S. invasion made contractors immune from local prosecutions for work-related conduct. Largely as a result of outrage over the Nisour Square incident, that immunity will be lifted under an agreement that takes effect in January -- too late for justice in this case.