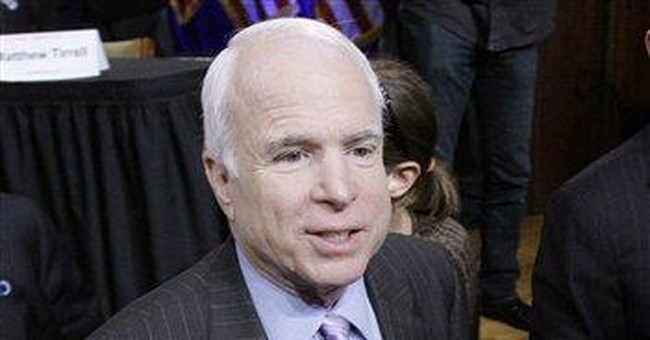 In asking Congress to allow warrantless surveillance of Americans' international communications, President Bush is seeking permission to do something he believes he does not need permission to do. Like a parent confronted by a defiant teenager, Congress is giving in while insisting it isn't.

Federal law already says the government may listen to the phone calls or read the email of people in the United States only if it follows procedures established by statute. The amendments to the Foreign Intelligence Surveillance Act (FISA) approved by the House last week say it again. Twice. In effect, Congress is saying, "We mean it. Seriously."

In Congress's defense (did I really say that?), it's hard to think of an effective statutory response to a president who, like Bush, feels free to ignore the law when it forbids him to do what he thinks is necessary to fight terrorism. The only solution to that problem is to replace Bush with a president who is more inclined to respect the rule of law and the separation of powers.

Although he may change his tune if he's elected (especially since he'll face a Democrat-controlled Congress disinclined to check his power), Barack Obama at least claims to believe in these principles. "As president," he told The Boston Globe in December, "I will follow existing law, and when it comes to U.S. citizens and residents, I will only authorize surveillance for national security purposes consistent with FISA and other federal statutes."

The Illinois senator disappointed many of his supporters by backing the FISA amendments, which not only approve warrantless wiretaps but grant retroactive immunity to the telecommunications companies that assisted the Bush administration's illegal post-9/11 surveillance program. Still, he emphasized that Congress has the authority to restrict or rescind the president's spying powers.

"Under this compromise legislation," Obama said, "the president's illegal program of warrantless surveillance will be over. It restores FISA and existing criminal wiretap statutes as the exclusive means to conduct surveillance, making it clear that the president cannot circumvent the law and disregard the civil liberties of the American people."

By contrast, Obama's straight-talking opponent, John McCain, has vacillated on this issue and now seems unwilling to give a straight answer to the question of whether, as president, he would obey the law. "I think that presidents have the obligation to obey and enforce laws that are passed by Congress and signed into law by the president, no matter what the situation is," he told the Globe in December. "I don't think the president has the right to disobey any law."

Yet a McCain adviser contradicted that position in a May letter to National Review Online, saying the Arizona senator believes "neither the administration nor the telecoms need apologize for actions that most people understand were Constitutional and appropriate in the wake of the attacks on Sept. 11, 2001." He added that "John McCain will do everything he can to protect Americans from [terrorist] threats, including asking the telecoms for appropriate assistance to collect intelligence against foreign threats to the United States as authorized by Article II of the Constitution."

The reference to Article II implies that the president has constitutional authority to flout statutory restrictions on wiretaps, the very position that McCain disavowed in December. Pressed by The New York Times to explain the blatant contradiction, a campaign spokesman wrote in an email message, "To the extent that the comments of members of our staff are misinterpreted, they shouldn't be read into as anything otherwise." Thanks for clearing that up.

In response to the Times story, McCain himself claimed, "it's ambiguous as to whether the president acted within his authority" when he ordered the warrantless wiretaps. No more need be said on the subject, according to McCain, because we should "move forward" instead of "looking back." The question for voters is whether they want to move forward with a president whose commitment to obey the law is ambiguous.