Jack Kerwick
|
Posted: Apr 02, 2021 2:42 PM
Share   Tweet
The opinions expressed by columnists are their own and do not necessarily represent the views of Townhall.com. 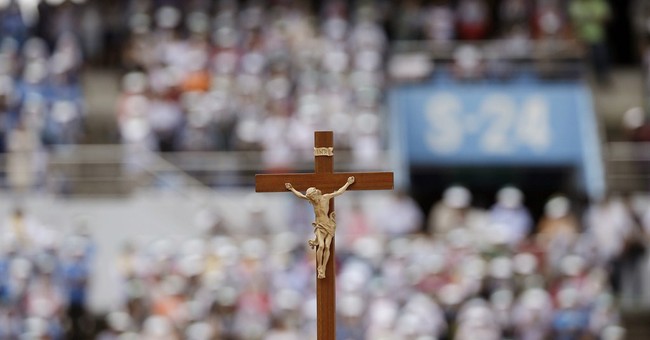 As I write this, it is Good Friday, the day that Christ, God-in-the-Flesh, died on the Cross.

Christians the world over recognize this event as “the Atonement,” the means by which their Lord and Savior, fully God and fully Man, reconciled the Ground and Creator of the cosmos with the human beings who He made in His image.

This Good Friday is as good an occasion as any for Christians (and, if they are so inclined, non-Christians as well) to familiarize themselves with some of the theories of the Atonement that have been advanced by Christian thinkers of various sorts over the centuries.

According to this theory, Christ is the ransom that God pays to Satan to liberate humanity from the Enemy’s bondage.  Irenaeus, a second century Christian thinker, makes his case in his work, Against the Heresies:

“Thus the powerful Word and true human being, ransoming us by his own blood in a rational manner, gave himself as a ransom for those who have been led into captivity.  The apostate one [Satan] unjustly held sway over us, and though we were by nature the possession of Almighty God, we had been alienated from our proper nature, making us instead his own disciples.”

Evidently, Irenaeus thought that the Ransom theory had the virtue of distinguishing the justice of God, who he thought would never resort to force or violence to get His way, from the injustice of the Devil, who abducted those who rightly belonged to God:

“Therefore the almighty Word of God, who did not lack justice, acted justly even in the encounter with the apostate one, ransoming from him the things which were his own, not by force, in the way in which [the Devil] secured his dominion over us at the beginning, by greedily snatching what was not his own.  Rather, it was appropriate that God should obtain what he wished through persuasion, not by the use of force, so that the principles of justice might not be infringed, and, at the same time, that God’s original creation might not perish.”

“The Lord therefore ransomed us by his own blood, and gave his life for our life, his flesh for our flesh; and he poured out the Spirit of the Father to bring about the union and fellowship of God and humanity, bringing God down to humanity through the Spirit while raising humanity to God through his incarnation, and in his coming surely and truly giving us incorruption through the fellowship which we have with him.”

Not all proponents of the Ransom theory hold that God paid a ransom to the Devil.  Some, like St. Athanasius, author of the fourth century classic, On the Incarnation, argued that the ransom of Christ’s blood was our debt to the God against whom we had sinned.  St. Athanasius explains:

“The Word thus takes on a body capable of death, in order that, by partaking in the Word that is above all, this body might be worthy to die instead for all humanity, and remain incorruptible through the indwelling Word, and thus put an end to corruption through the grace of his resurrection [.]”

“Hence he did away with death for all who are like him by the offering of the body which he had taken on himself.  The Word, who is above all, offered his own temple and bodily ransom for all, and paid their debt through his death.”

This, in turn, means that “the incorruptible Son of God, being united with all humanity by likeness to them, naturally clothed all humanity with incorruption, according to the promise of the resurrection.”

The Mousetrap or Fishhook theory

In 400, Rufinus of Aquileia wrote that the whole point of the Incarnation was that “the divine virtue of the Son of God might be like a kind of hook hidden beneath the form of human flesh” that would “lure on the prince of this world [Satan] to a contest; that the Son might offer him his human flesh as a bait and that the divinity which lay underneath might catch him and hold him fast with its hook [.]”

When Christ died, the Devil, deceived into thinking that Jesus was only human, “seized the body of Jesus,” “unaware of the hook of divinity which lay inside.”  Upon being hooked, Satan “was immediately caught.” Consequently: “The gates of hell were broken, and he was, as it were, drawn up from the pit, to become food for others.”

In the 11th century, Anselm of Canterbury, in his Why God Became Man, accounts for what he takes to be the essential purpose of the Atonement.

Sin is injustice against God.  Because God is infinitely just, this necessarily implies that both the sin that is committed against Him is infinitely unjust and that He must receive “complete satisfaction” for it.

Only God can deliver satisfaction for the infinite enormity of the offense against Him, but since it is humanity that is the offender, justice requires that humanity pay the satisfaction.  The problem is solved by way of God becoming a man!  As Anselm puts it, “if God only can, and only humanity ought to make this satisfaction, then it is necessary that someone must make it who is both God and a human being” (emphases original).

The Father and the Son together, through the death of Christ, cover humanity’s debt and forgive all that is owed.

In the 12th century, Peter Abelard claimed that the true significance of Christ’s atoning death is located in the power of its moral example, its expression of the divine love for us.

“Now it seems to us that we have been justified by the blood of Christ and reconciled to God in this way: through this singular act of grace made known in us [by way of Christ assuming human nature and instructing us through this medium “by both his word and his example, even to the point of death”],” an act of grace that “has more fully bound us to himself by love.”

Abelard boils it down:

“Therefore, our redemption through the suffering of Christ is that deeper love within us which not only frees us from slavery to sin, but also secures for us the true liberty of the children of God, in order that we might do all things out of love rather than out of fear—love for him who has shown us such grace that no greater can be found.”

There are still other theories of the Atonement and variations within these theories that we simply can’t get into there. On this Good Friday, though, Christians should indeed contemplate Jesus’ sacrifice on the Cross.  As they are doing so, they would be well-served to reflect upon the words of Pseudo-Hippolytus, a Christian theologian from the early Patristic period who regards the crucifixion of Christ as an event of cosmic significance. “The tree” to which he refers is, obviously, the Cross of Christ.  It is worth quoting him at length:

“The tree is for me a plant of eternal salvation.  By it I am nourished, by it I am fed.  By its roots, I am firmly planted.  By its branches, I am spread out, its perfume is a delight to me, and its spirit refreshes me like a delightful wind.  I have pitched my tent in its shadow, and during the heat I find it to be a haven full of perfume…This tree of heavenly proportions rises up from the earth to heaven.  It is fixed, as an eternal growth, at the midpoint of heaven and earth. It sustains all things, the support of the universe, the base of the whole inhabited world, and the axis of the earth.  Established by the invisible pegs of the Spirit, it holds together the various aspects of human nature in such a way that, divinely guided, its nature may never again become separated from God.  By its peak which touches the height of the heavens, by its base which supports the earth, and by its immense arms subduing the many spirits of the air on every side, it exists in its totality in everything and in every place.”

It is indeed a Good Friday.