The 'Second Christ': The Life of Saint Francis of Assisi

Jack Kerwick
|
Posted: Mar 17, 2019 12:01 AM
Share   Tweet
The opinions expressed by columnists are their own and do not necessarily represent the views of Townhall.com. 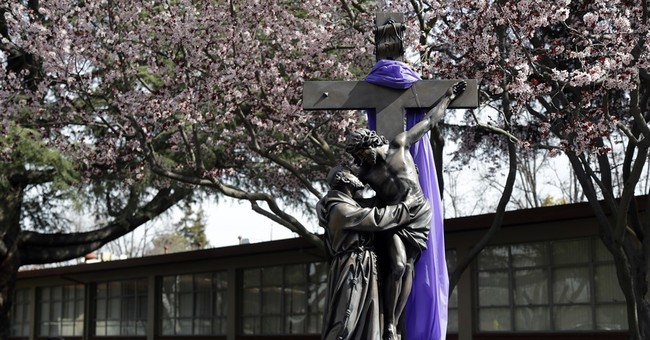 The Lenten season is here once again and Catholics the world over are preparing for Easter Sunday. In doing so, it is to the lives of holy men and women from over the centuries and millennia that all Christians, Catholic and non-Catholic alike, should turn in their quest to become more Christ-like.

Saint Francis of Assisi is as good a place to begin as any, for such was the power of his example that he has enjoyed for centuries the unique distinction—one, tellingly, that neither the original twelve Apostles nor even Saint Paul succeeded in obtaining—of being regarded as “the Second Christ.”

Saint Francis was born Giovanni Bernardone in Assisi in either 1181 or 1182.  His father was Pietro Bernardone, an Italian silk merchant, and his mother a French woman of whom little is known.  His father, who was away on business when his son was born, was reportedly upset when he discovered that his wife had baptized the baby with the name of “Giovanni,” after John the Baptist.  The last thing that Pietro wanted was for his son to become a holy man; rather, he wanted for him to become a man of the world, a businessman that would follow in his own footsteps both in the silk industry as well as with respect to being a Francophile, like Pietro.

Thus, his father renamed the baby who would become known as the Second Christ as “Francesco,” which essentially means “Frenchman.”

By the standards of the world, Francis had it good. He is said to have been handsome, charming, jocular, popular, and, of course, affluent. Though good-natured enough, Francis was filled with pride and sought attention by, among other things, dressing colorfully.  He was a ring-leader of sorts of a group of young men known for their proclivity toward acting recklessly by way of excessive drinking and other antics.  Francis himself would retrospectively concede that this was a period of his life during which he “lived in sin.”

Francis was very much of the world, seeking, as Saint Augustine put it centuries earlier, “love of self to the point of contempt for God.” Francis thirsted for worldly glory.

And so he went off to war.

Yet Assisi lost, with most of its soldiers being killed. Francis had been taken prisoner and his life spared only because it was known that his was a family of means, a family, that is, that was capable of paying ransom for him. After spending one year of being confined to a dark dungeon, Francis was freed.

However, he resumed his old ways, and still longed for Earthly glory. So, when the Fourth Crusade was under way, Francis used his father’s resources to purchase a gold-decorated suit of armor, an exquisite cloak, and a horse so that he could become a crusader.  He assured his associates that he would return a prince.

Given his resolve, one can imagine the shock of his contemporaries who knew him when, in less than one day, Francis returned.   Francis, who always wanted nothing more than to be loved by the world, suffered a dramatic reversal of fortunes as those who knew him mocked and disparaged him, charging him with, among other things, being a coward. His father too expressed rage after having invested in that first-rate suit of armor that Francis had now decided not to use.

Francis claimed that while on his journey, the Lord spoke to him in a dream, assuring him that Francis’s priorities were radically misplaced and instructing him to return home.  It would be a while, but through much prayer and time alone—including time alone in a cave, where he broke down in tears as he lamented his sinful life—Francis drew nearer to God.

When he encountered a leper one day, Francis—the man who had virtually every worldly good for which a person could wish—was repulsed by the leper’s sight and stench.  Yet he embraced the man and kissed his hand.  The leper reciprocated.  Overcome with joy, Francis waved to the leper as Francis rode off on his horse, satisfied that he had done what God willed for him to do.

This event marked a turning point on Francis’s spiritual quest, but, as we will see, he still wasn’t as enlightened as he would become.

While praying at the church at San Damiano, Francis heard Christ speak to him: “Francis,” he heard Jesus say, “repair my church.”  This ancient church was in need of much work, and so Francis assumed that Christ wanted for him to attend to this particular church. He didn’t yet realize that it was the Catholic Church as a whole to which Francis was commanded to minister.

Francis took fabric from his father and sold it.  The proceeds he gave to the bishop for the San Damiano church. When his father discovered what his son had done, Pietro charged Francis with theft and essentially disowned his son in front of the bishop and the people of Assisi.  Francis would no longer be entitled to his father’s inheritance from this juncture onward. Francis’ response, however, was revealing:

He in turn disowned all worldly possessions, in effect taking a vowel of poverty. Moreover, he used his father’s treatment of him as an opportunity to…rejoice. Francis paid back his father the money that he had taken and, in front of the townspeople, joyfully declared:

“Pietro Bernardone is no longer my father. From now on I can say with complete freedom, ‘Our Father who art in Heaven’” (emphasis mine).

It was at this moment that Frances took comfort in knowing that, ultimately, he had but one true Father, a Parent who would never disown him.

Singing blissfully, Frances went off into the woods, into the bitter cold, wearing rags.

And when bandits jumped him, threw him in a ditch, and stole what little clothing he had left, Francis climbed out of the hole and…sang.

Within time, this once-worldly man, this man who not only possessed every conceivable Earthly good, but who relished in worldliness, became a living inspiration to his contemporaries. He rebuilt, with his bare hands, stone-by-stone, the church at San Damiano.  But he also began to rejuvenate the Church, the Bride of Christ that had become corrupted by greedy clerics, by way of his example of piety.

To underscore this last point: Francis was no fire-and-brimstone preacher.  While sleeping outdoors and begging for scraps of garbage to eat, he was always careful to show nothing but tender mercy to even those of the Church’s members who were most scandalous.  For example, when informed of a priest who had been openly living with a woman, the informant asked Francis if this meant that the Eucharist had been corrupted.   Francis responded by seeking out the guilty priest, kneeling before him, and kissing his hands.

Francis’s rationale for his action was that the priest’s hands had touched the Body and Blood of Christ.

His lifestyle began winning over people, folks from all social strata: merchants, educators, university students, and churchmen from the fields and the towns.  Francis refused to be recognized as their “leader.” Instead, he treated everyone as an equal, a child of God who, as such, was entitled to be treated as a being with an inherent dignity.

He did, though, insist that those who would follow his example—Francis had no interest in founding an “order,” for he rejected what he took to be the military connotations of this concept—should do a few simple things, prescriptions that he lifted straight from the Scriptures, specifically, from the New Testament.  Those who wished to follow him needed to: (1) sell all that they had and donate the proceeds to the poor; (2) take nothing with them on their journey to spread the Gospel; and (3) assume their cross daily.

His following grew into the thousands even before Francis passed to glory at the young age of 44.

Other noteworthy facts regarding the life of this outstanding person and disciple of Christ include, but are not limited to, the following:

(1)During the Fifth Crusade, in order to put a stop to the warring between Christians and Muslims, Francis left Italy and traveled to Syria with an eye toward converting the Sultan and however many practitioners of Islam would lend him a hearing.

Francis and his companions were imprisoned. Mercifully, their lives were spared. Moreover, the Sultan was charmed by Francis and reportedly remarked: “I would convert to your religion, which is a beautiful one—but both of us would be murdered.”

Francis and his friends were freed.

(2)Francis saw God’s blessedness incarnated in all of creation—not just in humanity, the crown jewel of God’s handiwork.  It is precisely because of the intensity and inclusiveness of his vision that Francis is known as the patron saint of the environment.

In other words, Francis saw all creatures, animals, plants, the planets, moons, and stars as his brothers and sisters in God.  Even death itself Francis acknowledged as an intrinsic feature of the reality that God authored.

Francis’s vision he beautifully articulated in his Canticle of Brother Sun and Sister Moon.  The following excerpts concisely encapsulate his theocentric reading of the cosmos:

Praised be You my Lord, with all Your creatures,

Who is the day through whom You give us light.

And he is beautiful and radiant with great splendor,

Of You Most High, he bears the likeness.

Praised be You, my Lord, through Sister Moon and the stars,

In the heavens you have made them bright, precious and fair.

Praised be You, my Lord, through Brothers Wind and Air,

And fair and stormy, all weather’s mood,

by which You cherish all that You have made.

Praised be You my Lord through Sister Water,

So useful, humble, precious and pure.

Praised be You my Lord through our Sister,

who sustains and governs us,

Praised be You, my Lord, through Sister Death,

from whom no one living can escape. Woe to those who die in mortal sin! Blessed are they she finds doing Your will.

(3)Such was Francis’s compassion for all of creation that he supposedly preached to birds, imploring them to be thankful for their elegant clothing, their freedom, and the fact that God attended to them with care.

Another account is that of a wolf who had been devouring the residents of a town.  The townspeople wanted the wolf dead.  Francis, though, intervened on behalf of the wolf and persuaded the latter to forego its predatory ways.

The wolf subsequently became a pet to the community.  The people who at one point wanted to kill the wolf now made sure that he was fed and treated with compassion.

Francis’s lifestyle of poverty and traveling caught up to him.  He became blind and was racked with other ailments. He nevertheless remained joyful.  It was after he was afflicted with blindness that he wrote his Canticle thanking God for Brother Sun, and it was during his trials, while approaching his deathbed, that he prayed to God to share in Christ’s Passion.  Upon seeing a vision of the Lord, Francis’s prayer was answered as he received the stigmata.

During this Lenten season, and every season, let us remember the man who memorably remarked that while as Christians we do indeed have a duty to follow our Lord’s injunction to preach the Gospel to all nations, we should use words only when necessary.