The Bride of Christ—Not Leftist Ideology

Jack Kerwick
|
Posted: Aug 23, 2017 11:11 AM
Share   Tweet
The opinions expressed by columnists are their own and do not necessarily represent the views of Townhall.com. 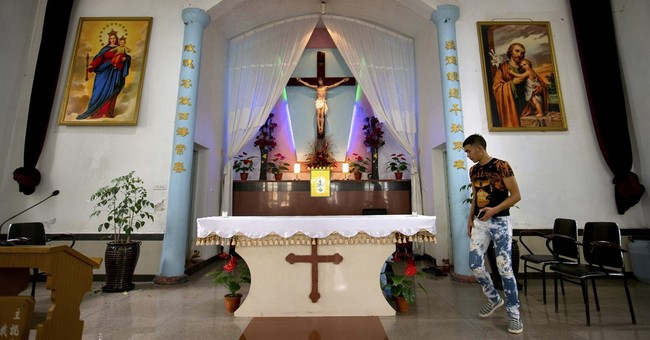 I am 45 years-old and a lifelong Roman Catholic. After having drifted away from the Church during my teenage years, at 21 I renewed the faith of my childhood. Since this time, I have been an active, reasonably orthodox, Roman Catholic Christian.

This past Sunday, however, I did something that I had never before done: In the midst of the officiating priest’s homily, I stood up and exited my parish church.

It’s not that I hadn’t been tempted to take this exact course of action during past homilies. One time, in fact, I did just this. But within seconds of leaving the building, I felt badly and returned to finish out the Mass. This last Sunday, though, I entered my car and drove off.

As readers of this column can probably guess, I left during the homily because it was shot through with the very same leftist ideology that my Church has been imbibing for far too long. This particular priest on whom I walked out was doing nothing more than expressing the politics of the contemporary Church leadership. His remarks were simply the proverbial straw that broke the camel’s back.

The Gospel reading on Sunday was Mathew 15: 21-28. This is the story of the Canaanite woman whose faith so impressed Jesus that he obliged her request and healed her sick daughter. This is a beautiful story from which powerful lessons for the faithful can be drawn. The interpretation that my priest constructed from it, though, isn’t one of them.

First, Father Anonymous transformed the Canaanite woman into a leftist street agitator. That is, he likened her to those mobs of “protesters” and “counter-demonstrators” that, to hear him tell it, have refused to be silent in the face of “hate,” “advocates” for “the poor,” “the marginalized,” “the forgotten.”

Second, not unlike the liars, virtue-signalers, and political opportunists among the movers and shakers in the Fake News media and Washington D.C., my priest implied that these contemporary Canaanites were the Antifa and Black Lives Matter scumbags that crashed Charlottesville and, more recently, the Boston Free Speech Rally. At the very least, he never condemned any of those “advocates for the poor” who attack police officers and civilians with all manner of weaponry while accusing everyone to their right of being “fascist scum.”

Third, while condemning “hate,” “racism,” and “exclusion,” Father Anonymous managed to identify as an illustration of these evils the idea of a wall along America’s southern border.

To repeat, in a not so-subtle way, my priest linked with neo-Nazis those tens of millions of Americans who desire a border wall.

This was it for me.

When the Catholic Church was besieged with criticism over its management of the sex abuse scandal, some of us went to great lengths to defend it against attempts to make this one episode in its 2,000 year lifespan indicative of its character overall. And we vigorously defended the legions of good, committed priests who were as sickened as anyone else by the egregious conduct of perverted clerics and the equally perverse bishops who covered for them.

Some of us have expended much energy into defending the Church’s traditional teachings against her detractors—even when we ourselves may have been struggling as well with some of these teachings.

It is difficult for us now, in this era of Pope Francis, not to feel at once confused and betrayed.

Neither this Pope nor the American Catholic leadership seems to be as remotely upset over the nearly 52 million unborn human beings in America who were killed in their mothers’ wombs from 1970-2016 as they are upset about restrictions on immigration, legal and illegal.

Yet from its inception, the Church has taught that abortion is an intrinsically evil act.

Homosexuality, extra-marital sex, and divorce, to say nothing of “same-sex marriage,” have all been condemned by the Church from day one. One needn’t necessarily agree with all of its positions in order to see that as long as these are indeed its positions, then its clerics should preach and exposit them.

This is not the case.

Christians throughout the world, especially in places like Africa and the Middle East, routinely suffer persecution that, from our contemporary Western perspective (from any perspective), is unimaginably brutal in nature. In over 80 percent of these instances, our Christian brothers and sisters suffer courtesy of the adherents of just that religion—Islam—shared by the vast majority of “refugees” on whose behalf Pope Francis is forever crying: Francis (and his subordinates) never tire of castigating Europeans for the latter’s reluctance to allow into their countries ever-larger numbers of immigrants many of whose members have proven themselves hostile to their hosts.

The generous, charitable majorities of affluent countries whose achievement was to create societies that are magnets for the world are constantly taught about their “duty” to be welcoming to even more immigrants. Never are the poorer immigrants taught about their duty to be grateful, respectful, and loving toward those but for whose generosity they’d continue to mire in the misery of the hellholes created by their compatriots.

Never is there a word mentioned from the pulpit about the duty of those who created the wretched conditions that drive residents of Third World lands to become immigrants to desist from their reckless, violent, and destructive ways.

Among a Catholic’s baptismal promises is the pledge to reject Satan and all of his works. The Catholic has an unqualified obligation in Christ to identify and resist evil. To judge from the current leadership of my Church, however, one could be forgiven for thinking that the biggest—perhaps the only—evils that confront the world are “xenophobia,” income and wealth “inequality,” and…carbon emissions.

Notice, these are hardly ominous threats. That they aren’t evils can be gotten easily enough from the fact that, in the Western world, it requires absolutely zero courage to speak to them.

In glaring contrast, tackling real evils—murderous Christophobia; astronomical black-on-nonblack violence in America; illegitimacy, particularly among blacks and Hispanics; Islamic terrorism; abortion; the fundamental transformation of Western societies by non-Westerners who repudiate their values, history, and institutions; Democratic politicians, including and especially Catholic Democratic politicians, who rigorously advocate on behalf of abortion as a woman’s “right,” and who favor universalized “health care” policies that coerce Catholics and others who conscientiously object to it to subsidize abortion and contraceptives; and violent leftist militancy, to name but a few—requires defying the prevailing Politically Correct dogma.

And this, in turn, most certainly does demand bravery.

I don’t know if I will yet join the 30 million or so Americans who self-identify as ex-Catholics. The Church is larger than any of its members and transcends its individual moments. I will try to bear this in mind as I attempt to resolve the identity-crisis of sorts that I’m presently experiencing, an identity-crisis that I could no longer deny as of this past Sunday.