NeverGOP? The Record Of The NeverTrumpers

Jack Kerwick
|
Posted: Jun 15, 2016 4:00 PM
Share   Tweet
The opinions expressed by columnists are their own and do not necessarily represent the views of Townhall.com. 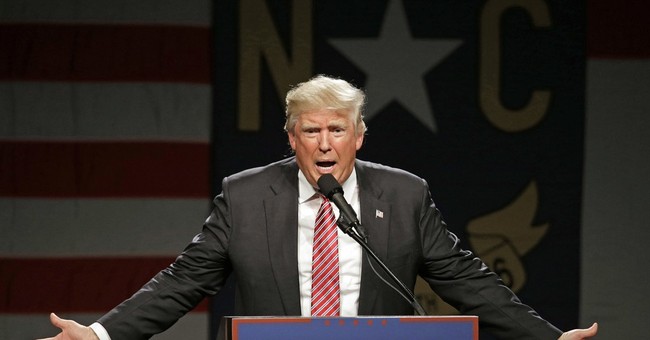 As I write this, Democrat and Republican commentators alike assure us that given the spike in his “unfavorables” that one recent Washington Post poll purports to have tracked, Donald Trump’s odds of winning in November are all but zilch.

The Washington Post is hardly the most trustworthy of sources when it comes to Trump, it’s June, and those who are touting these numbers as iron-clad proof that Trump is finished are either Hillary Clinton boosters or GOP NeverTrumpers.

And the latter have a track record of making predictions regarding Trump’s demise that is anything but stellar.

Way back in May of 2012, after Mitt Romney embraced Trump when the latter endorsed him, George Will couldn’t imagine “what voter is going to vote” for Romney after he had been seen with “this bloviating ignoramus” Trump.  It was “obvious,” from Will’s perspective, that Trump was as big a political loser as anyone.

In April of 2015, shortly before Trump threw his hat in the ring, Will said that he “hoped” that Trump would run for the presidency so that he would be “predictably shellacked [.]” As recently as this past March, Will wrote confidently that he thinks “we may have passed peak Trump.”

Five years ago, when Trump toyed with the notion of pitching a bid for the presidency, Fox News guru Charles Krauthammer referred to him as the GOP’s “Al Sharpton,” a “provocateur, and clown, unserious” (for a decidedly different take on the prospect of a 2012 Trump run, see here).   Krauthammer contended that Haley Barbour would be most likely to “win” the 2012 primary and general contests.

Immediately after the first GOP primary debate last August, Krauthammer told Megyn Kelly that what audiences saw in the real estate mogul’s performance was “the collapse of Donald Trump.”  His rivals, Krauthammer continued, “left him out in the cold.”

In reality, it was Trump who was leaving all 16 of his competitors “out in the cold.”  Yet in spite of the historically unprecedented crowdedness of this field, Karl Rove continually told us that Trump had a “high floor and low ceiling” of support. He also predicted that the nominee would be Jeb Bush, Scott Walker, or Marco Rubio.  These three candidates constituted the “top tier.”  The third tier was comprised of those candidates “who are unlikely to break through.”

As for Trump, Rove dismissed him as a “complete idiot.”

Former movie critic and talk radio host Michael Medved charged Trump with being a narcissist.  His presidential campaign is “entirely about one man and his brash personality, and has nothing to do with needed conservative reforms.” Medved drew this conclusion, it’s important to note, from the fact that, in the first GOP debate, Trump “said he couldn’t commit to support the ultimate nominee, and refused to rule out a third party run.”

This refusal, Medved asserts, gives rise to the inescapable question: “If he [Trump] really cares about the conservative principles he now espouses, why wouldn’t he promise to support the Republican nominee?”

Given that he’s a NeverTrumper, Medved stands condemned by the measure by which he gauged Trump’s conservatism, for it is now he who refuses to endorse “the ultimate nominee.”

Redstate editor and Fox News contributor Erik Erikson wrote of Trump one year ago that he and his “advisers…directly did himself a disservice by playing for bombast and not statesman.”  Trump, he explained, “will not be a winner,” but “a spoiler.”

In August of 2015, Glenn Beck promised that Trump could never win the general election.  He also said at one and the same moment that “research” suggests that Trump may have already reached his “ceiling” of support (remember, this is shortly after the first debate when there were still a total of 17 candidates in the race).

In January of 2015, just five months before Trump declared his candidacy, Jonah Goldberg rejected a comparison that had been wrought between Sarah Palin and Trump. Unlike the former, Goldberg explained, Trump “has a long record of clownishly pretending he’s going to run for president [.]” That “people take him seriously,” Goldberg remarked, “drives me crazy,” for Trump is “a bane of humanity.”

Last summer, Goldberg conceded that Trump was “entertaining.”  He also assured those who would listen to him that the “GOP’s Trump problem will eventually melt away.”  In another article, Goldberg dogmatically declared: “He has no chance of becoming president, but he has the huge potential to deny his alleged party a White House victory in 2016.” Trump, Goldberg told us, will likely “find an excuse to retreat” from the GOP race.  But by then the damage would have been done.

Of course, it is now Goldberg and company, in their refusal to back their party’s nominee, who are doing all that they can to deny their “alleged” party a White House victory.

Shortly before the Iowa caucuses, Bill Kristol said that if Trump lost (which he did, by one delegate, to Ted Cruz), then the Trump “mystique disappears” and he becomes “just another candidate [.]”  Even at this point in time, Kristol openly entertained the prospect of supporting a third party candidate, though he admitted to being only “semi-serious” about it, for “I don’t think that Trump will be the nominee [.]”

In July of 2015, Rich Lowry was jubilant.  He blogged: “Yes, Iowa, We Have a Frontrunner.”  For Lowry, this frontrunner’s name was Scott Walker.  And Commentary’s Peter Wehner confidently wrote at the same time that Trump’s remarks concerning John McCain’s having been captured in Vietnam marked “the moment it all blew apart for The Donald.”  At this critical moment, Wehner told us, Trump’s campaign became “toast.”

The experts, the Trump candidacy has shown, are nothing of the kind.  Either they are really that incompetent at making predictions or, which is at least as likely, they were actually trying to determine, rather than forecast, Trump’s demise.

Things haven’t changed.  But the NeverTrumpers should exercise caution, for whether they succeed or not in sabotaging Trump’s electoral prospects, the millions who back him may eventually form a “Never” movement of their own—a NeverGOP.