A Catholic's Letter to Pope Francis

Jack Kerwick
|
Posted: Feb 25, 2016 11:37 AM
Share   Tweet
The opinions expressed by columnists are their own and do not necessarily represent the views of Townhall.com. 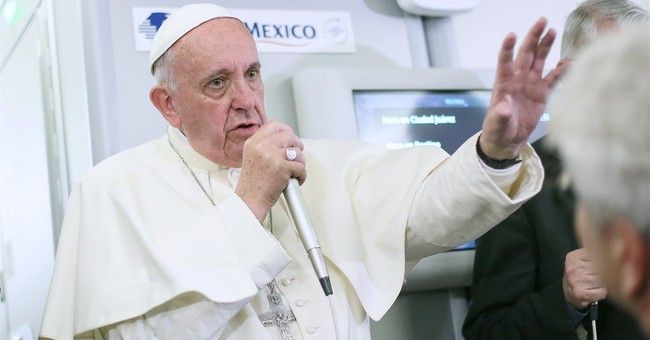 As everyone by now knows, because of Donald Trump’s position on immigration and his desire to build a wall along America’s southern border, you said of him that he is “not a Christian.”

In the wake of quick and furious backlash, you attempted to qualify—some say “walk back”—your remarks. Yet the Vatican’s subsequent remarks made it crystal clear that you did indeed mean to reject Trump’s claim to be a Christian.

After assuring the public that your comments should in no way be understood as “a personal attack” or “an indication of voting,” your spokesperson at the Vatican added that “the Pope said what we all know, when we follow his teaching and his position: that we should not build walls but bridges. He has always said this, continuously, and he has said this about the issues of migration in Europe, many times.

“Therefore the key point is welcome—the building of bridges instead of walls—that is characteristic of this Pontificate. It must be interpreted and understood in this way” (emphases added).

So, Holy Father, the reporter who initially questioned you about Trump’s stance on immigration in effect got it right: Trump is indeed in favor of deporting millions of illegal immigrants, and he is indeed in favor of erecting a wall. Admittedly, Trump does not intend on separating families, as this reporter dishonestly said. But you never spoke to this aspect of Trump’s policy; you spoke only to Trump’s view on the construction of a wall.

And now we know that you didn’t express a problem with people who only want to build walls. You believe that anyone who wants to build walls per se is not a Christian.

Francis, it brings this Catholic no satisfaction to suspect that the heir to Saint Peter is using this holy office to advance a political agenda. How can such suspicions not arise? After all, you made the unprecedented move to single out an American citizen—an American presidential candidate with millions of supporters—as a faux Christian for wanting to secure his country’s borders.

Moreover, not only have you refrained from questioning the Christianity of such leftist politicians as, say, President Barack Obama; you have been photographed smiling ear to ear with this man who has not only supported the slaughter of tens of millions of unborn human beings who would otherwise have been born if not for Roe v. Wade, but who three times voted against the Born-Alive Infant Protection Act.

The latter, in case you didn’t know, is a law that would have provided protections to infants who survived botched abortion attempts. As things currently stand, such infants must be allowed to die.

This same person also bequeathed to us his infamous “Affordable Care Act”—more ominously, and accurately, known as Obamacare—a law for which not a single member of American’s other national party voted and which requires Catholic and other Christian employers to subsidize both contraceptive and, worse, abortion services for their employees.

And it also coerces all taxpayers to do the same.

Again, from you, Your Holiness, we heard nothing.

Obama is the first president to have endorsed “same-sex marriage.”

Yet I don’t recall you saying of Obama that he is not a Christian.

Of course, Obama is hardly the only politician in the United States who has supported such things. The point, though, is that you have never challenged the Christian bona fides of anyone who has advocated on behalf of such policies.

Christians throughout the Middle East and Africa are being butchered, enslaved, raped, and pillaged by their Muslim oppressors—and yet, Holy Father, you choose instead to use your global influence to shame the West about “climate change,” “inequality,” and the West’s reluctance to allow still more immigrants into its lands.

Nor do you ever, ever emit a syllable to the immigrant about his responsibility, his duty, to express gratitude—lots and lots of gratitude—to his hosts.

Speaking as a Roman Catholic Christian, Your Eminence, I confess to finding the uniquely harsh nature of your judgment concerning Donald Trump’s religiosity and the fact that it was a position on, of all things, border security that aroused your ire to be deeply troubling.

Your moral priorities as a man, and a Christian, are wildly out of order.

Given that you have resources in exposure and influence that most of us can only dream of, this is a real tragedy for the countless millions of victims the world over whose plight may have been altered if only you spoke on their behalf.

Remember, as a wise man once said, “The only thing necessary for evil to triumph is for good men to do nothing.”