Jack Kerwick
|
Posted: Jan 23, 2016 12:01 AM
Share   Tweet
The opinions expressed by columnists are their own and do not necessarily represent the views of Townhall.com. 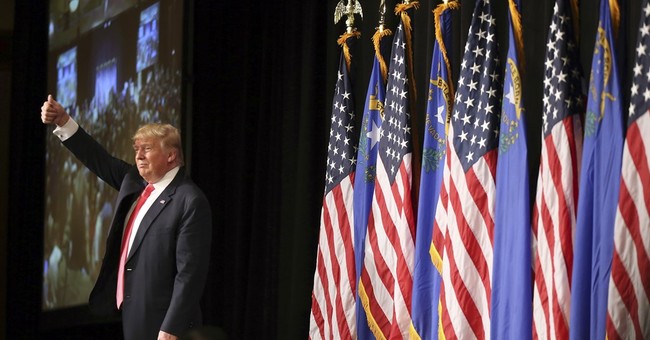 As for the specifics of their remarks, more will be said at a future time. The virtue of this symposium is that it has the potential to generate a conversation over the nature of conservatism.

Undoubtedly, Trump has never read, if he’s even heard of, Edmund Burke, “the patron saint” of conservatism. I would be surprised if he’s even heard of, let alone read, the work of the 20th century’s American reincarnation of Burke, Russell Kirk. Chances are even slimmer yet that he’s familiar with Michael Oakeshott’s classic essay, “On Being Conservative,” or George Nash’s and Paul Gottfried’s seminal studies of the conservative movement in America.

The one contemporary nationally-renown figure who is more philosophically approximate to Burke and Kirk than anyone else—Pat Buchanan—Trump at one time ridiculed. Nor has Trump been any more generous to either Ron or Rand Paul, both of whom, though widely regarded as “libertarian,” are nevertheless conservative just insofar as they are (or at least seem to be) committed to federalism, our Constitution.

Yet here’s the rub: What’s true of Trump in all of these respects is at least as true of many of his critics in the NR symposium.

Granted, I’m sure that there are many among the latter who have heard of Burke. Since Kirk’s name was at one time on NR’s masthead, some of them have probably heard of him as well. However, Kirk’s name is scarcely ever, if at all, mentioned by any contemporary “conservatives.” And on those rare occasions when Burke’s name is dropped, it is almost always in connection with a single line of his: “The only thing necessary for evil to triumph is for good men to do nothing.”

For Buchanan and the Pauls (especially the Elder), many of the Trump critics at NR have reserved nothing but contempt.

Burke articulated his famous statement of what subsequently came to be known as “conservatism” while making his case against the conflagration of the French Revolution. Burke attacked the Revolution at its root, the philosophy underwriting it. This philosophy is what has been referred to as “rationalism.”

The radicals who supported the Revolution lent plausibility to their cause by trading in such abstractions as, say, “the Rights of Men.” Burke knew, as David Hume, another famous 18th century philosopher and political conservative, observed, that the more general are a theory’s ideas and propositions, the more remote it is from the concreteness of everyday life, the more plausible it can appear—regardless of how ridiculous the theory actually is. This is part of the appeal of rationalism: it shields nonsense from the light of day.

Burke, like both his peers and successors in the classical conservative tradition, despised rationalism. They despised ideology.

Conservatism, then, emerged as a response to rationalism, to ideology.

Yet most of those “conservatives” who participated in the NR symposium are ideologues. Their “conservatism” is not conservative at all but, rather, another species of rationalism.

Anyone who champions “American Exceptionalism,” the radically ahistorical doctrine that America is not a historically and culturally-specific country but an “idea,” an abstract “proposition,” is philosophically no different in temperament from the radicals who Burke reviled.

It is this rationalist fiction that’s been used to justify limitless immigration, both legal and illegal, from societies and cultures that have little to nothing in common with—and, in some instances, no small measure of hostility toward—American institutions and traditions.

It is this rationalist fiction that has also been used as the pretext for launching endless military-centered missionary efforts—wars—to deliver another rationalist fiction, “liberal democracy,” to foreign lands around the planet.

And as Burke, Kirk, and other genuine conservatives could have predicted—and as some, like Buchanan, actually have predicted—the indulgence of such ideological fantasies has been ruinous for untold millions of actual flesh and blood human beings both at home and abroad.

In fact, given his past opposition to the disastrous invasion of Iraq and his current opposition to more American social engineering in Syria (and the Middle East generally); his diplomatic attitude toward Putin; and his recognition of the horrors and potential horrors visited upon Americans by our American-Last immigration policy, it seems that while Trump is no classical conservative, he sounds more like Burke than do his detractors at the neoconservative National Review.