The Myth of Reagan the Conservative 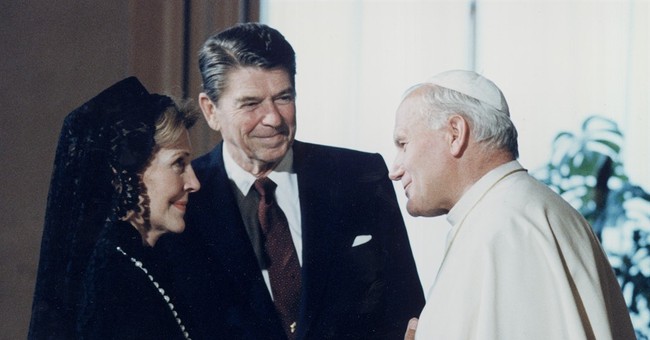 On October 21, Bill Bennett and Sean Hannity had a somewhat feisty exchange during a segment on the latter’s television show.

Bennett made two remarks that are worth focusing upon. First, when asked whether he is “ok” with a Trump candidacy, Bennett replied that he’s “not OK at all” with it. Given “the totality of his acts and his record and the things he has stood for,” Bennett said, it’s clear that Trump’s “not very principled in terms of his convictions [.]” Trump has “a record” that’s “longer than your arm” of being “wrong on all of these things [.]”

Trump, that is, is not a real conservative.

This is Bennett’s first point. He then went on to say that “Reagan would be thrown out by this caucus [the Freedom caucus that’s resisting Paul Ryan’s move to become House Speaker].”

Bennett, Hannity, and many other self-avowed media and Washington “conservatives” may be unaware of this, but Bennett’s invocation of Reagan as the emblem of conservatism actually reinforces Trump’s candidacy.

It isn’t that Trump is conservative. The point, rather, is that, for all of the rhetoric to the contrary notwithstanding, Reagan was not a conservative—at least he wasn’t if we judge him according to Bennett’s benchmark of “the totality of his acts and his record and the things he has stood for.”

And, unlike Trump, who has never actually governed in a way to contradict the GOP—the “conservative”—party platform, Reagan as both governor of California and president of the United States undermined it every step of the way.

While he’s widely heralded for having slashed taxes, as Alan Simpson, a former Republican senator from Wyoming and friend of Reagan, confirmed, Reagan went on to raise taxes eleven times during his two terms.Moreover, in 1983, he raised payroll taxes to pay for Social Security and Medicare, i.e. “government-run healthcare.”

Reagan eliminated not a single government program, much less an agency. Instead, he strengthened those agencies—like the Departments of Energy and Education—that he originally pledged to abolish, and he even strengthened the profoundly intrusive Occupational Safety and Health Administration. Reagan created the Secretary of Veterans Affairs. As Murray Rothbard writes, “The Gipper deregulated nothing, abolished nothing.”

He concludes: “Overall, the quantity and degree of government regulation of the economy was greatly increased and intensified during the Reagan years.”

Indeed it was. The federal government grew exponentially under Reagan’s watch.

As recently as 2014, Mother Jones, a leftist journal, commended Reagan for advancing the cause of Big Government. Alex Park remarks: “If you judge him [Reagan] by the uncompromising standards of today’s GOP, Reagan was a disaster.” During Reagan’s eight year tenure, the national debt almost tripled from $907 billion to $2.6 trillion. The federal workforce increased to 324,000 people (of whom only 26% consisted of military personnel). In fact, Park observes that as of 2012, nearly a quarter of a century after Reagan left office, the federal government has nearly a million fewer people working within it. In contrast, under the “liberal” Democrat, Bill Clinton, “the federal workforce was at its smallest size in decades.”

Implicitly, even Reagan’s biggest devotees admit that he presided over a substantial enlargement of the federal government, for they continually declare, against “liberal” Democrats who suggest otherwise, that government revenues increased courtesy of Reagan’s income tax cuts.

Thanks to Reagan’s economic policy, then, the federal government now had significantly more of citizens’ monies to do with them as it pleased.

In 1986, Reagan granted amnesty to some three million or so illegal immigrants that were then residing within the United States, a move that only exacerbated this country’s illegal immigration crisis.

Regarding gun-control, Reagan’s actions too frequently conflicted with his pro-Second Amendment rhetoric. He promoted and signed into law the “Firearm Owners Protection Act of 1986,” legislation that the NRA favored. Yet Reagan signed it after a Democratic congressman from New Jersey, William J. Hughes, slipped in a provision that criminalized ownership of fully automatic firearms that weren’t already purchased before the date that the Act became law.

After Reagan left office, he came out in support of “the Brady Bill,” even going so far as to say in a New York Times editorial that had this piece of federal legislation existed in 1981, the assassination attempt on his own life may have never occurred! Reagan as well cited gun death statistics that, he contended, could be reduced courtesy of such federal legislation as the Brady Bill.

In 1994, Reagan, along with Jimmy Carter and Gerald Ford, endorsed a federal ban on “assault rifles.”

Of course, no one should’ve been surprised by any of this. As governor of California, Reagan—an FDR Democrat for over three decades who never abandoned either his admiration for FDR or the New Deal—foreshadowed how he would govern as president.

While campaigning for the governorship of California, Reagan pledged to not raise taxes. Once he was elected, however, he not only reneged on his promise; he slammed Californians with the largest tax increase in their history. And it wasn’t just incomes that he taxed. Reagan proceeded to tax sales, cigarettes, alcohol, banks, and corporations.

He also acquiesced in legislation requiring tax payers to conserve three of California’s rivers—after he had promised to fight it.

Reagan legalized abortion. Though Reagan (supposedly) came to regret this, his biographer, Lou Cannon, writes that Reagan “knew that the California law was overly restrictive,” and he “was particularly bothered that it made no exception for rape or incest.”

Like such “pro-life” Republicans as, say, Paul Ryan—Reagan’s rightful heir, according to Bennett—Reagan was against abortion except for when he was for it. The politically-convenient (but logically and morally untenable) position to which virtually every Republican subscribes is that abortion is immoral except for when the human victim is the product of rape or incest, or when that unborn human being threatens its mother’s life.

It is obvious, though, or at least should be so, that this point of view is indeed a cop-out, for if abortion is immoral, it is immoral because it consists in the unjustified killing of an innocent, defenseless human being. This innocence is in no way compromised by the circumstances within which that human being was conceived. Thus, if Republican conservatives are “pro-life” even though they allow exceptions that are morally irrelevant to the innocence of the unborn, then liberal Democrats are also “pro-life,” for most oppose abortion as well under some circumstances (second and third trimesters, etc.).

In summary, if Trump is no “conservative” because of his past support for Democrats and some of their positions, then neither was Reagan a conservative for the same. (In fact, Reagan appears far less “conservative” than Trump by this measure, and there is no denying that, because he actually held office, that Reagan did far more damage to the “principles” for which “conservatives” claim to stand.)

On the other hand, if Reagan remains, not only a “conservative,” but the poster boy for “conservatism,” then so too does Trump fit this description.