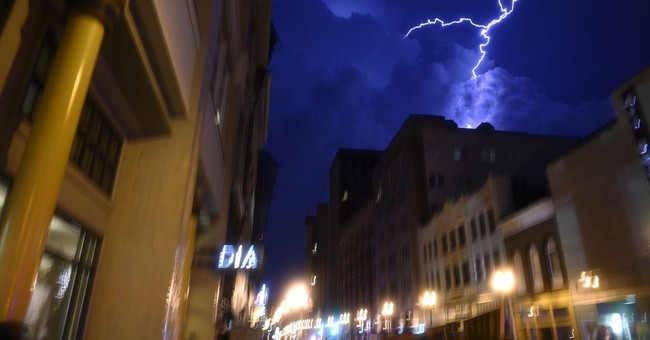 To judge from the ghastly details of “The Wichita Massacre” that I relayed in a recent article, it is difficult not to think that this abomination of a crime supplies us with as blatant an expression of unmitigated evil as any that we’re likely to encounter. Indeed, Reginald Carr and his brother Jonathan are in fact the “soulless monsters” that one of their two surviving victims described them as being, and if they were white and their victims were black—rather than the other way around—there isn’t a person in America who wouldn’t have long known this.

Yet as a reader was quick to note, there is another crime that occurred in Knoxville, Tennessee in 2007 that rivals, and may, if this is possible, even exceed the massacre in Wichita for its raw savagery. Like the case in Wichita, “the Knoxville Horror,” as it’s dubbed by those relatively few interested souls that dared to report on it, has received virtually no national coverage.

And like the case in Wichita, the perpetrators in Knoxville were black and their prey white.

By all accounts, Channon Christian, a 21 year-old senior at the University of Tennessee who lived at home with her parents and brother, was as beautiful on the inside as she was on the outside. Her boyfriend, a 23 year-old trim carpenter named Christopher Newsom, was equally beloved by lots of friends and family.

Little could either one of them have known that when they left their parents’ homes on the night of January 7, 2007, they would never see their loved ones again.

On this fateful Saturday evening, Channon and “Chris” had planned upon going to a friend’s birthday party. Chris arrived to meet Channon at another friend’s apartment so that he could follow her to the party in his own car. But first he escorted Channon to her own car where he leaned over to give her a kiss.

And that’s where the young couple was greeted by thugs who carjacked and abducted them at gunpoint.

Channon and Chris were driven to the rundown residence of their assailants: George “Detroit” Thomas; Letalvis “Rome” Cobbins; Lemaricus “Slim” Davidson; Eric “E” Boyd; and Vanessa Coleman. It at this house of horrors that Channon and Chris would be subjected to a species of brutality that defies the imagination—and that would, ultimately, culminate in their deaths.

According to the Knoxville News Sentinel, a medical examiner—Dr. Darinka Mileusnic-Polchan—testified at the trial of one of the defendants that “[Chris] Newsom was repeatedly raped and then blindfolded, gagged, arms and feet bound and his head covered.” Then, while “barefoot, he was either led or dragged outside the house to a set of nearby railroad tracks, where a gun was placed to the back of his head and fired. He was shot twice more, once in the neck and once in the back.”

His body was set on fire.

The Knoxville News Sentinel reports: “[Channon] Christian suffered horrific injuries to her vagina, anus, and mouth. She was not only raped, but savaged with ‘an object’…She was beaten in the head. Some type of chemical was poured down her throat, and her body, including her bleeding and battered genital area, likely scrubbed by the same solution [.]”

As if the specifics of her ordeal weren’t dreadful enough, the paper informs readers that it occurred “all while Christian was alive” (emphasis added) [.]

Yet Channon’s nightmare was not over.

“She was then ‘hog-tied,’ with curtains and strips of bedding, her face covered tightly with a small white trash bag and her body stashed inside five large trash bags before being placed inside a large trash can and covered with sheets.”

The parents of Channon Christian and Chris Newsom have been made to endure not only the trauma of losing their children, and losing them to a gang of conscienceless demons. Not unlike the families of the Carrs’ victims in Wichita, they’ve also had to suffer the indignity of witnessing new trials ordered—and on the flimsiest of grounds—for their children’s rapist-murderers: the judge who presided over the first set of trials, it was argued, had a drug problem during the last couple of years of his tenure that rendered him incompetent.

This pathetic argument worked—much to the chagrin of the jurors who made it clear in no uncertain terms that it was they who convicted the villains, and that they were quite competent when they did so.

Thankfully, however, verdicts delivered the second time around weren’t all that different in substance from those originally issued (though the sheer fact that any of these gutter snipes continue to avail themselves of oxygen is itself an injustice):

The ringleader, Lemaricus “Slim” Davidson remains on death row; Letalvis “Rome” Cobbins is serving a life sentence without parole, while George “Detroit” Thomas serves a sentence of 123 years to life; Eric “E” Boyd, who was convicted of his role in the carjacking—a federal offense—and for his assistance in helping the others evade capture, is doing 18 years in a federal penitentiary; and Vanessa Coleman is serving a 35 year sentence—but she will be eligible for parole in early 2019.

Most of us are familiar with the old saying, “Charity begins at home.” So too, then, must the fight against evil—the fight in which those in Republican-friendly media outlets are constantly imploring us to engage when discussing the rest of the world—begin at home. As the Wichita and Knoxville atrocities make painfully clear, evil does not end at America’s borders.

But the first step toward fighting evil is calling it for what it is—even when its agents (and their victims) make it “politically incorrect” to do so.