Jackie Gingrich Cushman
|
Posted: Aug 01, 2019 12:01 AM
Share   Tweet
The opinions expressed by columnists are their own and do not necessarily represent the views of Townhall.com. 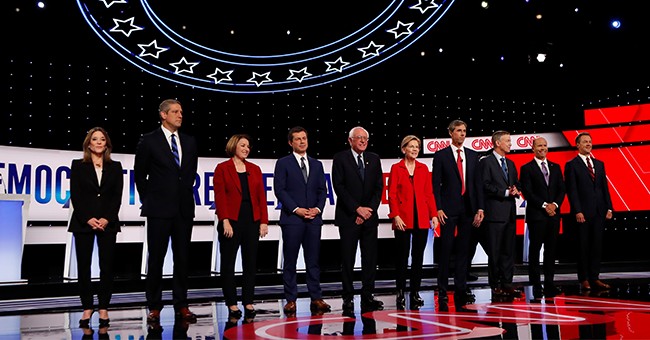 If you watched the first night of the second Democratic primary debate, or paid any attention to the media this past weekend, you'll recognize the current Democratic narrative: President Donald Trump is a racist, and we have to beat him.

The previous narrative, which was promulgated for years, was Russian collusion. With the release of the Justice Department report and last week's testimony by former FBI Director Robert Mueller regarding the report, that narrative no longer resonates with reality. Mueller's testimony left most of America questioning who wrote the report (hard to believe it was Mueller, based on his tenuous grasp of what it contained) and who drove the investigation in the first place.

It will be interesting to see if the new narrative -- which is really an old narrative resurrected -- will stick. The challenge the Democrats face is this: The more they list racism the reason for every problem the less time they'll have to work on real solutions.

Meanwhile, in the White House on Monday, Trump met for two hours with 20 inner-city African American faith leaders to discuss how to work together to improve inner-city communities. This meeting will lead to more real solutions than grandstanding and name-calling ever will.

Let me be clear: Racism does exist, and it is not right. But the question is how we can all work together to improve the lives of all Americans. What has been on display nationally -- the ranting and raving over who is the worst -- does not seem to be fixing our problems. Only if we look at our country as an interconnection of people and relationships can we take steps to improve it.

Last February, Jo Craven McGinty wrote "The Math Behind Successful Relationships" for the Wall Street Journal. It focused on the research of psychologist Dr. John Gottman and mathematician Dr. James Murray and their findings regarding the ratio of positive to negative interactions when a couple is dealing with a "contentious issue."

The research revealed much about the risk of divorce. "For low-risk couples, the ratio of positive to negative responses was approximately 5 to 1. For high-risk couples, the ratio was about 1 to 1," wrote McGinty. "Marriages, they found, fell into five categories: validating, volatile, conflict-avoiding, hostile and hostile-detached ... Only three -- validating, volatile and conflict-avoiding -- are stable, they write in their book, but a volatile marriage, though passionate, risks dissolving into endless bickering."

Does that sound like where we are today as a nation? Do you think our political process appears as if it is dissolving into endless bickering? If so, go ahead and preorder my new book, "Our Broken America: Why Both Sides Need to Stop Ranting and Start Listening" (Center Street), which will be released next month. And if you don't think so, you're one of the few.

"We have created an environment," I write in "Our Broken America," "where facts are sometimes disregarded when they don't fit the narrative; opinions that reinforce the narrative are the only ones that are given credence." Just notice the lack of media coverage of the White House meeting between Trump and the African American faith leaders.

The solution, at least for marriages, seems simple but not easy. "Face each other when talking. And acknowledge your role in the dispute," wrote McGinty. It is the act of listening that changes the relationship. "If they listen to each other they might have a different future," says Murray.

We should attempt to do the same as a nation. What we need is a revival -- a political revival that includes the ability to look past easy narratives and recognize the individuality, potential and divinity of every person. The problem with narratives is they describe but "neither provide nor even suggest a plan of action. Instead, they virtually insure that real problems continue to be unresolved," wrote Edward Halper, a professor of philosophy at the University of Georgia, in an article for The Weekly Standard last year.

So what is the first step we can take toward this national political revival? We need to broaden our minds, look beyond the easy narratives and think for ourselves. We need to stop constantly criticizing, condemning and complaining. "Instead of being a nation grateful to God for His blessings, and using those blessings to build upon," I write in "Our Broken America," "we are now a nation too often focused on fault finding, leaving us divided in numerous ways."

We need to replace negative interactions with positive ones among people in both political parties. It will not be easy, but I believe we are a nation worth this hard work. Let us focus on being grateful, listening to others and finding solutions for our communities.