Jackie Gingrich Cushman
|
Posted: Mar 15, 2018 12:01 AM
Share   Tweet
The opinions expressed by columnists are their own and do not necessarily represent the views of Townhall.com. 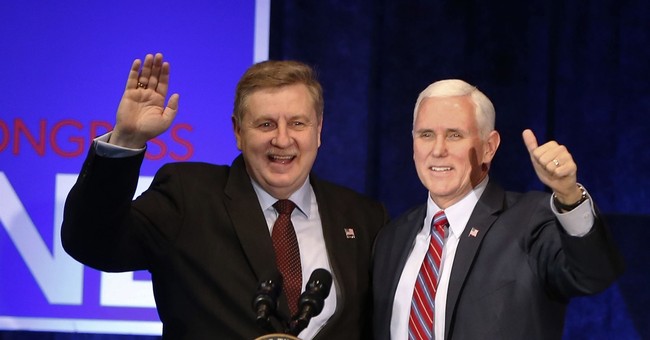 Republicans have a chance to learn and grow. The question is whether they will take this opportunity to do that.

I am writing this column on the morning after the special election for Pennsylvania's 8th congressional district, and the race is too close to call. In a district that Donald Trump won by almost 20 percentage points in 2016, too close to call is a surprise to many -- especially to Republicans.

While Democrats will be busy claiming victory, no matter the final result, and will rush to proclaim a blue wave in the fall for the mid-term elections, there is still a lot of political time before the mid-term elections. Losing provides an opportunity for learning -- if it is taken. This week, when tennis great Serena Williams lost to her sister Venus, her response was one worth emulating: "I've grown most not from victories," Serena said, "but setbacks. If winning is God's reward, then losing is how he teaches us." The question is: Will Republicans spend time in reflection and reconsideration -- and learn from this experience?

The lessons: elections are about choice; likability and optimism matter, and voters want a candidate who will work for them.

In our current two-party system, voters often make their choices based on whom they dislike the least. The victors, after winning, often conclude that they earned the votes they received, rather than understanding that voters selected them as the lesser of two evils.

Part of the reason Trump won in November 2016 was because he was the better choice when compared with Hillary Clinton. She was surly, negative and petulant during the race. Her candidacy appeared to be more about her than about the American people.

The Democratic primary was thrown Clinton's way by Rep. Debbie Wasserman Schultz, D., Fla., who was the Democratic National Committee chair until it became evident that she was throwing the primary for Clinton. If that had not happened, who knows who would have won the general election? If Trump had run against Joe Biden, the former vice president and everybody's favorite uncle, the outcome could have been different.

Tuesday's special election in Pennsylvania was also a choice between two candidates. On the Republican side, Rick Saccone, an Air Force veteran who played a diplomatic role in North Korea, and served in the Pennsylvania State House. On the Democrat side, former marine and former federal prosecutor Conor Lamb.

Saccone tied himself closely to Trump, while Lamb declared that he would NOT support Nancy Pelosi, D., Calif, for speaker of the House, thereby negating Republican attempts to tie him to Pelosi.

While Saccone appeared determined and dedicated, Lamb came across personable and caring. Lamb ran as a conservative Democrat, who not only renounced Pelosi, but supported Second Amendment rights. During appearances, Lamb voiced optimism.

Saccone's message focused on supporting Trump and his agenda. Lamb communicated that he cared about "the real issues ... that affect your lives."

While Saccone said he would work with Trump, Lamb said, "I'll work for you." Voters want candidates who work for them. Their elected officials are supposed to work for them -- that's their job. And when that work aligns with the work of the president, that's great. But voters are unlikely to vote for a flunky to serve someone else.

The relative reality of political races means that, while competence matters, so does likability. If both candidates are deemed competent, then the one who is more likable will win. The question voters ask is this: do they (the candidates) care about me, or a person like me?

Serena Williams' response to her loss was professional and will result in a positive outcome for her. The question is whether the Republicans will learn their lessons as well. That elections are about relative choice; likability and optimism matter and voters want a candidate who will work for them.