Jackie Gingrich Cushman
|
Posted: Dec 01, 2016 12:01 AM
Share   Tweet
The opinions expressed by columnists are their own and do not necessarily represent the views of Townhall.com. 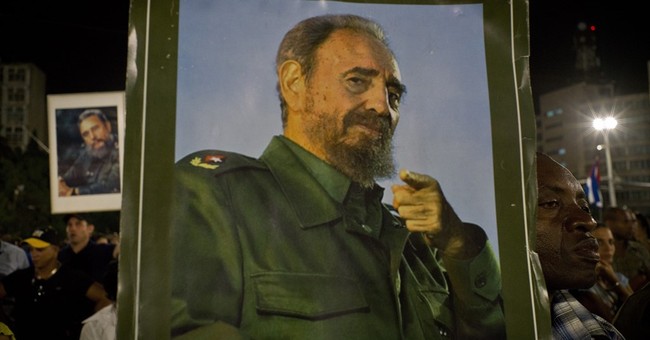 This past week, Fidel Castro, Cuban dictator, died. The responses from President-elect Donald Trump and the Obama White House underscored how different the two men are, and provided a window into how the next four (or possibly eight) years will differ from the past eight.

President Obama's statement was without emotion, worded not to offend anyone, (except those who had endured horrors under Castro), and did not acknowledge the horrors that Fidel Castro and his brother Raul have inflicted on the Cuban people. They were, in fact, ridiculous when viewed against reality.

"We know that this moment fills Cubans - in Cuba and in the United States - with powerful emotions, recalling the countless ways in which Fidel Castro altered the course of individual lives, families, and of the Cuban nation," Obama said. "History will record and judge the enormous impact of this singular figure on the people and world around him."

"Today, the world marks the passing of a brutal dictator who oppressed his own people for nearly six decades. Fidel Castro's legacy is one of firing squads, theft, unimaginable suffering, poverty and the denial of fundamental human rights.

"While Cuba remains a totalitarian island, it is my hope that today marks a move away from the horrors endured for too long, and toward a future in which the wonderful Cuban people finally live in the freedom they so richly deserve.

Though the tragedies, deaths and pain caused by Fidel Castro cannot be erased, our administration will do all it can to ensure the Cuban people can finally begin their journey toward prosperity and liberty."

Fidel Castro, for me, was a brutal dictator whose brother murdered a friend's father.

Fidel Castro wrested the reins of power from Cuban military dictator Fulgencio Batista on Jan. 1, 1959. My friend, Luis Haza, was eight. His father, Col. Bonifacio Haza, commanded the National Police in Santiago. Batista had ruled with military might, leading a reign of terror that saw people taken from their homes, never to return.

By the time Fidel Castro rode victoriously into Santiago, the prevailing belief (including among the island's business leaders) was that Castro's overthrow of Batista would lead to democracy and free elections. Col. Haza believed democracy was Cuba's destiny and stood with Castro on a stage soon after.

But it became evident that Castro neither believed in nor would support democracy; Col. Haza withdrew his support.

Within a few days, Col. Haza was forced into a dark cow pasture where he and 70 other prisoners were executed under the direction of Raul Castro, Fidel's younger brother and now Cuban president.

"My father thought the revolution was for democracy," Luis Haza told me. "Castro betrayed my father and the entire revolution."

By 1963, Luis Haza had become an accomplished violinist and was appointed an associate concertmaster of a professional orchestra in Cuba. According to Haza, "the power structure wanted to see if I could be 'integrated' into the system. If they integrate the son of an executed man, it would be a model for all the young people."

But Luis Haza had a different dream: "To come to the United States for freedom. We knew that in Cuba, eventually we would die, just like we had seen neighbors die, and so-and-so disappeared. It was a daily thing, a daily subject: American freedom, to go to the United States."

After Haza refused to play for the elder Castro, a military squad charged into a rehearsal and pointed machine guns at the pianist. "Boy! Play something!" they shouted.

He did. "I played the American national anthem, 'The Star Spangled Banner.' The entire thing! You could hear a pin drop. I finished playing, and nobody knew what to do."

Soon after, Haza fled with his family to Spain, where they waited to emigrate to the United States. They arrived in New York on Election Day -- November 3, 1964.

In his death, Col. Bonifacio Haza served his country, and in serving his country he served his family, including his 8-year-old son, who now lives in freedom.

While many Americans take their freedoms for granted, Col. Haza's story and that of his son remind us that the freedoms we have we enjoy are extraordinary, and that freedoms are never free.