Jackie Gingrich Cushman
|
Posted: Jun 09, 2016 12:01 AM
Share   Tweet
The opinions expressed by columnists are their own and do not necessarily represent the views of Townhall.com. 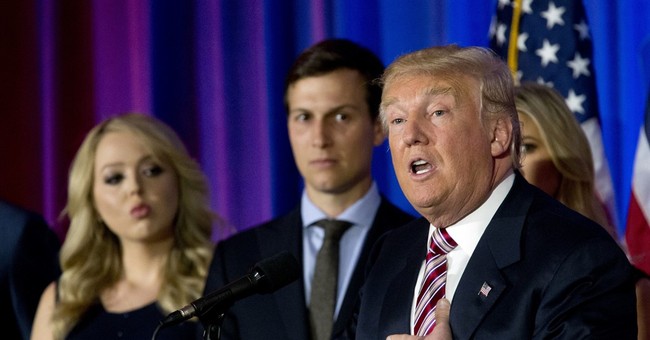 Trending
This week, the general election began when Hillary Clinton became the presumptive nominee of the Democratic Party.

Both Clinton and Republican presumptive nominee Donald Trump each laid out their plans in speeches Tuesday night.

Clinton spoke in Brooklyn, New York, to a large and raucous crowd, Trump spoke in the upper-middle-class town of Briarcliff Manor, New York, to a smaller and more subdued crowd at his headquarters.

The speech locales marked only the beginning of the differences between the two candidates. Both candidates reflected different auras than they had previously. Clinton appeared cheerful, confident and happy. Trump appeared focused, disciplined and warm. It was as if the candidates had transformed themselves as they moved from the primary stages toward the general election.

It will be fascinating to see if the new personas stick -- or if, once again, Clinton becomes shrill, cackling and condescending, and Trump becomes overbearing, obnoxious and abrasive.

Both speeches laid out the themes of their general election pitch.

Synopsis: Clinton will have our backs, and Trump will fight for us. Clinton will continue the work begun by the Obama Administration, Trump will overthrow the rigged political system.

Based on the emotions of the electorate -- Trump's appeal might just win.

The themes Clinton noted in her speech were not surprising: first woman nominee, equality, cooperation and a focus on working together. Her criticism of her opponent was that Trump's slogan "'Make America Great Again' is code for "Let's Take America Backwards. Back to a time when opportunity and dignity we reserved for some not all."

Trump dismissed this attack during his speech, noting that everyone in America is welcome and included in his movement to revamp the political system. "The beauty of America first is that it brings us all together," he said. "Every American worker of every background is entitled to the same benefits, protections, and rights and privileges. It's got to be that way."

Clinton attempted to unite not only the Democratic Party, but also the American electorate, and call on them to work together. "There are no ceilings, no limits on any of us and this is our moment to come together," she said. Reinforcing that, she added, "If we stand together, we will rise together."

Trump noted that the Clintons have risen more than others. "The Clintons have turned the politics of personal enrichment into an art form for themselves... millions of dollars selling access, selling favors, selling government contracts ... illegal private server ... Hillary Clinton turned the State Department into her private hedge fund. ... It's a sad day in America when foreign governments with deep pockets have more influence in our own country than our great citizens."

Both candidates reached out to supporters of the defeated Democratic hopeful, Sen. Bernie Sanders, even as Sanders said he would continue to fight until the convention in Philadelphia.

"Senator Sanders," said Clinton, "his campaign, and the vigorous debate that we've had about how to raise incomes, reduce inequality, increase upward mobility, have been very good for the democratic party and for America...But whether you supported me or Senator Sanders or one of the Republicans, we all need to keep working toward a better, stronger America."

Trump reached out as well to Sanders supporters, appealing to the belief of many of them that the political system is rigged. "To all of those Bernie Sanders voters who have been left out in the cold by a rigged system of superdelegates, we welcome you with open arms," Trump said.

Again, the messages were clear, and different; Clinton's: Let's work together; Trump's: Let's fight against a rigged political system.

Trump focused on the possibility of changing the way politics works now. "I'm going to be America's champion," he said, "because, you see, this election isn't about Republican or Democrat, it's about who runs this country. The special interests or the people, and I mean, American people."

His pitch - I'll be your champion, "now, I'm going to fight for you, the American people. Like nobody has ever fought before. And I'm not a politician fighting, I'm me." He contrasted himself against Clinton, noting "we can't solve our problems by counting on the politicians who created our problems."

A focused, disciplined and warm Trump who contrasts himself to the former secretary of state and U.S. senator (part of the "rigged-political system), while reaching out to all Americans, might just be able to beat her. If he makes progress toward that goal, watch her become shrill, cackling, and condescending in the process.