Jackie Gingrich Cushman
|
Posted: Feb 11, 2016 12:01 AM
Share   Tweet
The opinions expressed by columnists are their own and do not necessarily represent the views of Townhall.com. 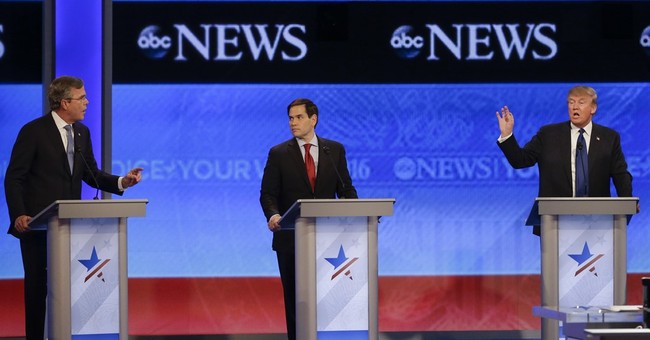 The long-awaited, first-in-the-nation caucus (Iowa) and primary (New Hampshire) are over. There have been a few surprises -- Donald Trump did not win Iowa, Bernie Sanders beat Hillary Clinton by more than 20 points in New Hampshire, and outperformed her with women voters by 11 points. Ted Cruz had a surprise win in Iowa, with Rubio performing strongly with a close third-place finish. John Kasich came in a strong second to Trump in New Hampshire, breathing life into his campaign.

The field has narrowed, down to two viable candidates on the Democratic side -- Clinton and Sanders -- and five on the Republican side: Trump, Ted Cruz, Marco Rubio, Jeb Bush and Kasich.

During the next two weeks, the candidates will focus on Nevada (February 20 for Democrats, February 23 for Republicans) and South Carolina (February 20 for Republicans, February 27 for Democrats). It's relatively easy to campaign when focusing on one state at a time. The beginning of the primary season is like a warm-up in tennis - you start at the net and work on volleys before stepping back and using the whole court. The transition from net to full court in a presidential campaign is fast and furious.

The state-by-state progression allows the candidates and their organizations to focus time, effort, message and money on one state -- then move to another.

But on March 1, everything changes, as the contest moves to multi-state primaries. Campaign organizations have to be able to focus on groups of states, reallocating all of their resources -- money, volunteers and the candidates themselves -- in a way that maximizes their impact. Some campaigns will ignore certain states and focus on those that they decide are must-win states. Others will attempt to compete in every state.

Nevada and especially South Carolina will prove critical in setting the tone and tenor of the race while testing the capacity of the campaigns and the candidates to endure. If a candidate can win South Carolina, the resultant momentum can help raise money, volunteers and interest in other states. However, for the long game, it helps to have cash on hand, or the ability to self finance.

According to an article titled, "Which Presidential Candidates Are Winning the Money Race," published on February 1 in the New York Times, Clinton had the most money on hand ($38M) and had raised more than other candidates ($116M). Sanders had $28M on hand, having raised $75M. On the Republican side, Ben Carson's campaign had raised the most, $54M, and had $7M left, but he is clearly losing momentum. Cruz was next, ($47M raised with $19M remaining). Jeb Bush raised $32 M and had $8M remaining. Trump raised $19M with $7M remaining.

Kasich, who posted a strong result in New Hampshire (finishing second) had raised $8M and had $2M on hand, according to the New York Times article. Kasich will need to capitalize on his New Hampshire strong finish, raise money and connect with the people of South Carolina to make a strong showing.

Kasich is the Republican candidate who appears most thoughtful, caring, authentic and trustworthy, but his blue-collar, everyman approach leaves some wondering about his passion and his ability to inspire.

Clinton, known for her ability to think, seems neither authentic nor passionate. While she talks about caring for people, it's policy that really makes her tick. Jeb Bush, who has large amounts of outside money still sitting on the sidelines, appears authentic, thoughtful, trustworthy, and caring about people, but he is neither passionate (though he flashes passionately, at times) nor inspirational.

As for Cruz and Rubio, both are passionate and inspirational, but both are rehearsed enough to seem more stilted than authentic.

The primary in South Carolina will give voters of the Palmetto State a chance to determine which of the candidates' attributes are most important to them, and which best fits their bill.

This month will also be the last time the candidates have the luxury to focus on a few states. They have little time to hone themselves, their message, their delivery and their organizations.