The Appeal of Trump's Authoritarian Streak

Jackie Gingrich Cushman
|
Posted: Jan 21, 2016 12:01 AM
Share   Tweet
The opinions expressed by columnists are their own and do not necessarily represent the views of Townhall.com. 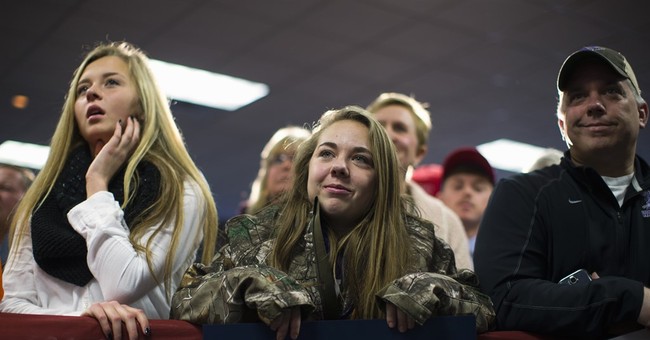 No one, with the possible exception of Donald Trump, could have predicted six months ago that the billionaire real estate magnate would be sitting atop the Republican presidential nomination field less than two weeks before the first caucus in Iowa.

But there is little doubt that that is where he is. According to Real Clear Politics, national polls have Trump at 35 percent, Ted Cruz at 19 percent and Marco Rubio at 13 percent. The site has Iowa's Trump average at 28 percent and Cruz's at 27 percent. In New Hampshire, which is more moderate than Iowa, Trump is at 31 percent, followed by John Kasich at 13 percent.

It's been a big week for Trump. He spoke at Liberty University, a bastion of evangelical higher education, and was endorsed by Sarah Palin in Iowa. As if this wasn't enough bad news for Cruz, who is attempting to solidify the evangelical base of the Republican Party, Iowa Republican Governor Terry Branstad accused Cruz of being "heavily financed by Big Oil." Branstad went on to state that, "once Iowans realize that fact, they might find other things attractive, but he could be very damaging to our state."

If, when watching Trump, you still can't quite determine why people are supporting him, take a look at the story Matthew MacWilliams wrote this week in Politico Magazine titled, "The One Weird Trait That Predicts Whether You're a Trump Supporter."

MacWilliams writes that "a single statistically significant variable predicts whether a voter supports Trump -- and it's not race, income or education levels: It's authoritarianism."

While the media and commentators have been focusing on race, age or gender, attempting to pigeonhole Trump supporters, MacWilliams sees something very different in the data.

How did MacWilliams determine the authoritarianism of the respondents? By asking questions that "pertain to child-rearing: whether it is more important for the voter to have a child who is respectful or independent; obedient or self-reliant; well-behaved or considerate; and well-mannered or curious," the article said. "Respondents who pick the first option in each of these questions are strongly authoritarian."

According to MacWilliams, it's not just Republicans who have the authoritarian trait, but also "39 percent of independents ... and the 17 percent of self-identified Democrats who are strong authoritarians ... it's very possible that Trump's fan base will continue to grow."

A second statistically significant variable was "fear of terrorism." In a time of uncertainty, whether from the economy, national security or an increasingly complex world, being unsure could lead people to follow leaders who seem able to solve their problems, thereby making their lives better.

When Palin endorsed Trump in Iowa this week, her comments reinforced MacWilliams' analysis. Palin talked about needing Trump so that there would be "no more pussyfooting around." She continued by asking the crowd, "Are you ready for a commander-in-chief ... let our warriors do their job and go kick ISIS' ass?"

Palin continued by providing a narrative of how a Trump presidency would make their lives more secure, "Ready for someone who will secure our border,

The appeal is for a leader who is strong, who can make us safe in an uncertain world.

This week, Iran swapped prisoners with the United States. We were given four, and gave them seven. This past Wednesday marks the 35th anniversary of the release of 52 U.S. hostages, which happened minutes after Ronald Reagan was sworn in as president. It ended a crisis that had lasted 444 days, and was among the reasons Jimmy Carter lost his bid for a second term.

This is a small view of the national security backdrop for this election.

This past Monday, when introducing Trump to the Liberty University students, President Jerry Falwell Jr. talked about why his father, Jerry Falwell, had supported Ronald Reagan over Carter. The younger Falwell said Reagan's ability to lead was the reason for his father's decision. "When he walked into the voting booth, he wasn't electing a Sunday school teacher or a pastor or even a president who shared his theological beliefs; he was electing the president of the United States with the talents, abilities and experience required to lead a nation."

It will be fascinating to see if evangelicals in Iowa and South Carolina follow the same line of reasoning when they walk into the voting booth and decide whether to vote for Trump.