Jackie Gingrich Cushman
|
Posted: Jan 07, 2016 12:01 AM
Share   Tweet
The opinions expressed by columnists are their own and do not necessarily represent the views of Townhall.com. 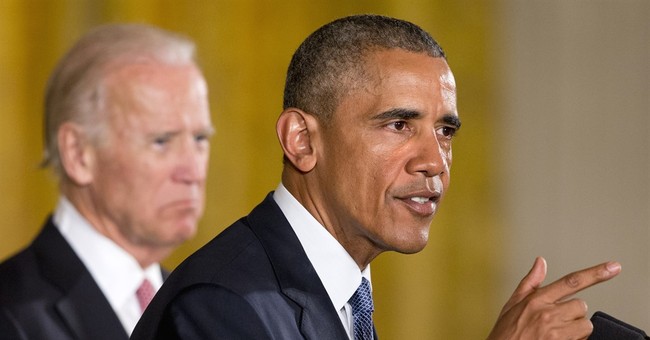 Trending
We've all had it happen to us. When an unpleasant issue (involving a child, co-worker, employee or whoever) needs confrontation and resolution, the other party attempts to distract us and refocus our attention elsewhere.

Don't look over there! Look over here!

This week, President Barack Obama did just that when he announced executive action regarding gun control. While he has long been interested in the topic, his real motivation may have had more to do with other issues than with gun control.

One, it distracts attention from the fact that Iran, in clear violation of its agreement last summer with Obama, is testing ballistic missiles.

Two, it distracts from major international issues and the United States' weakening stature on the global stage. See today's news that North Korea, after weeks of claiming they had the capability, said it had successfully detonated a hydrogen bomb.

Three, it distracts from the fact that our economy is anemic.

While it is an important topic, there are many challenges facing our nation.

Not to mention terrorism and immigration.

And four, it provides a topic for the news media and the presidential campaigns that is emotional and polarizing.

That's further polarization for our already polarized country. As Ron Brownstein wrote last October in a National Journal article titled, "How Democrats Lost Their Fear and Regained Their Voice on Guns," "In a Pew Research Center poll in July, the voters most likely to put gun rights ahead of controlling access were white men and women without a college education. Those voters are shrinking within the overall electorate. ... Democrats have won the popular vote in five of the past six presidential elections by replacing those voters with three growing groups: minorities, college-educated whites (especially women), and millennials." He cited a Pew survey that found "three-fifths of college-educated white women and almost three-fourths of African-Americans and Hispanics considered gun control more important than gun rights. (Millennials and college-educated white men split about evenly.) Like gay rights and immigration, gun control now helps Democrats cement a coalition united mostly by liberal cultural values."

It also provides a way for Democrats to potentially wedge independents, and some Republicans who are moderate on gun control, into their camp. According to a poll conducted last month by The Wall Street Journal, 38 percent of primary voters are NRA supporters. Of them, 59 percent are Republicans; 11 percent are Democrats; and 41 percent are independents.

Meanwhile, as Obama brings national attention to the issue of gun control, Iran violates the terms of its nuclear agreement. Obama declared the Iran agreement a victory, and he does not want to admit defeat. "Since signing a nuclear deal with the Obama administration last summer, Iran's theocratic regime has twice been caught testing ballistic missiles," the Washington Examiner reported Tuesday. "This is a black-and-white violation of the nuclear deal and it carries a prescribed consequence in the form of new punitive sanctions.

"Because the president wants this deal more than the Iranians do, the only truly binding part is the bit that imposes obligations on Washington, such as $100-150 billion in sanctions relief."

North Korea's activities also indicate Obama's national security weakness, as the country claims to have just detonated a hydrogen bomb. David Sanger and Choe Sang-Hun wrote in The New York Times on Tuesday, "North Korea said that the test had been a 'complete success.'" A North Korean announcer read this statement on the state-run network: "This is the self-defensive measure we have to take to defend our right to live in the face of the nuclear threats and blackmail by the United States." Sanger and Sang-Hun noted, "The test is bound to figure in the American presidential campaign, where several candidates have already cited the North's nuclear experimentation as evidence of American weakness."

As for the economy, well, it's far from mended. An Investor's Business Daily's editorial published last week, titled "Sorry, This Is Still the Worst Economic Recovery Ever," noted that our GDP is "stuck in a 2 percent growth rut and real middle-class wages are still flat-lining" and that "median household income of $56,700 at the end of 2015 stood exactly where it was, adjusted for inflation, at the end of 2007."

But next up from Obama: climate change and environmentalism.