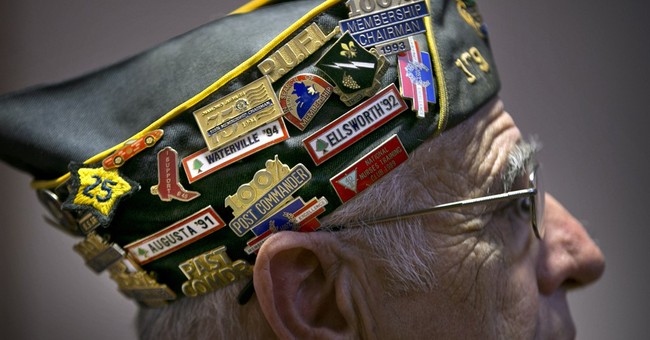 This week we celebrate Veterans Day, a day of appreciation and gratitude for all who have served in the United States Armed Forces.

For me, the day hits close to home. My grandfather served as a career Army officer. My father grew up moving from base to base as his father was ordered to different locations by the Army. They lived in Kansas, Germany, France and Columbus, Georgia, where my father graduated from high school.

When I was a child, my family and I traveled to the Panama Canal Zone, where my grandfather was stationed. I don't remember the canal, but I do remember playing cowboys and Indians with my Aunt Candy, who is six months older than I am.

We would run from tree to tree, taking cover and exchanging fire. Whoever was wounded or killed would pop back up a minute later, ready to get back in the battle. This version of war was a child's game -- full of innocence. We didn't understand that in real life, war has terrible consequences. We just knew that in the game we were playing, the bad guys lost and the good guys won.

As an adult, I know that the reality of war is different -- it's ugly, deadly and sometimes unavoidable. When it is unavoidable, we are blessed to have men and women who are willing to serve our country and make the ultimate sacrifice, if necessary.

We are a nation born out of war. After we declared ourselves independent from the British in 1776, it took us eight years to earn our independence through the Revolutionary War.

Our nation may not have been born without the leadership of George Washington. "He began his military career at the age of 20, when he was appointed a major in the Virginia militia. He served in the French and Indian War, where he had two horses shot out from under him and received four bullet holes through his clothes. His public service included serving in the Virginia House of Burgesses prior to the American Revolution, and as a delegate from Virginia to the Second Continental Congress in Philadelphia," I wrote in "The Essential American: 25 Documents and Speeches that Every American Should Own."

Washington was appointed commander in chief by the Second Continental Congress. He led our nation's army through the winter at Valley Forge, across the Delaware and eventually to victory over the British, ensuring our freedom.

After a brief retirement in 1789, the Electoral College voted Washington first president of the United States. He believed that men could govern themselves and that we were not "made for a master."

The Union was also saved through the trials of war. Abraham Lincoln, elected Nov. 6, 1860, was determined to save it. "The campaign had been impassioned and contentious. More than 80 percent of eligible voters turned out. Lincoln received 59 percent of the electoral votes, but less than 40 percent of the popular vote," I[1] wrote in "The Essential American." "In the 17 weeks between Lincoln's election and his Inaugural Address, seven states, South Carolina, Mississippi, Georgia, Florida, Alabama, Louisiana and Texas, seceded from the Union."

While he hoped for peace without war, he was determined to keep the nation united.

Lincoln's Inaugural Address placed the onus for war on the Southern states saying, "In your hands, my dissatisfied countrymen, and not in mine, is the momentous issue of civil war." War came. Four years later, Lincoln was reelected. He delivered his Second Inaugural Address on March 4, 1865.

"The dome that had been half-complete at the time of the first inaugural, with a crane sticking out of the top, had been completed. The Union Army had been victorious in recent battles, and the war's final outcome was all but determined. Slaves had been freed, and the Capitol was surrounded by the biggest crowd to date, with half of them reported as 'persons of color.'"

The clouds broke and the sun came out as Lincoln began to speak. Through the guidance of divine providence, the leadership of Lincoln and the service of our soldiers, the Union was saved.

As we remember and honor those who have served our country, we should remember that our country would not survive without the service of all our brave women and men.

Thank you for your service to our country.