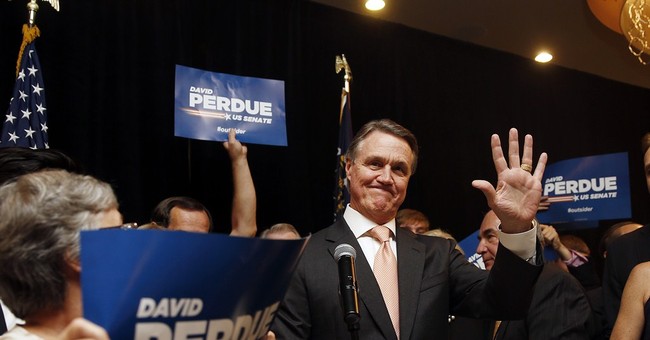 Trending
In the Georgia Republican runoff this week, David Perdue won the right to represent Republicans in the general election this fall. His win has placed the final piece of the puzzle for the political landscape this season in Georgia. With less than four months until the fall election, not a minute can be wasted by either side.

The Senate race has become an oddity, with two CEOs (one business, one non-profit and both with politically recognizable family names) vying to become the next United States Senator from Georgia. David Perdue, (former Republican Dollar General CEO and cousin of former Georgia Gov. Sonny Perdue), is facing off against Democrat Michelle Nunn (CEO of the Points of Light Foundation and daughter of former United States Sen. Sam Nunn).

Candidate Nunn had no real primary opponent, and has run a campaign focusing on her background, without ever mentioning that she is a Democrat. Her father, Sam, was and is much loved by Georgians, and is often referred to as a moderate. Michelle Nunn herself is running as a moderate, but will have to confront the fact that, if she is elected, she will vote for Harry Reid to serve as majority leader.

The governor's race is also in contention, and also has a famous last name on the ballot. Georgia Gov. Nathan Deal, a Republican, is being challenged by state Sen. Jason Carter, former President Jimmy Carter's grandson.

Recent polls, taken during a competitive Republican runoff and at a time when Michelle Nunn faced no opposition, put Nunn ahead of Perdue by six points. But a prior poll had Perdue ahead by five. Considering recent polls had Rep. Jack Kingston beating Perdue (who won), the one thing we know for sure is that polls are quite often wrong (ask Rep. Eric Cantor).

A quick review of the national political landscape shows that Georgia's outcome could affect the balance of power nationwide next year. The House is Republican, and is predicted to remain that way; President Obama is not up for reelection, so the only national political body in play is the Senate. The current Senate comprises 55 Democrats and 45 Republicans. There are 36 Senate seats up for election, 15 currently held by Republicans, 21 held by Democrats. Three seats currently held by Democrats -- Montana, South Dakota and West Virginia -- are expected to change into Republican hands, according to Real Clear Politics.

Their tossup category (could go either Republican or Democrat) includes eight seats, only two of which are current Republican seats (Kentucky and Georgia). The tossup seats currently in Democratic hands are: Alaska, Arkansas, Colorado, Iowa, Louisiana and North Carolina. Assuming the other states vote as predicted, whichever party gets the majority of the tossup seats will get the majority in the United States Senate.

But, as we know, all politics are local.

Atlanta's Mayor, Kasim Reed, a Democrat, is known for his great working relationship with Gov. Deal. Reed's help would be welcomed by both Nunn and Carter. In talking to Georgia Public Broadcasting reporter Bill Nigut recently, Reed offered advice to both Democratic candidates. "What needs to happen is you have to communicate with all your constituencies at the exact same time through Election Day," rather than waiting until later in the cycle to reach out to minority voters.

Reed understands that the get-out-the-vote effort is paramount, "and if they (Nunn and Carter) haven't invested, I would say somewhere between $3 to $5 million in their registration efforts and in their voter-contact efforts, I don't believe they are going to prevail. ... At the end of the day, no matter what the polls say, the election is going to be determined by the registration effort in the state of Georgia," he said.

Reed is right. In the end, it will all boil down to turnout -- who turns out to vote. While the Republican candidates are being fair when they tie the Democratic nominee to the Obama administration, they must do more than hope that Democrats can't persuade voters to go to the polls. The Republican candidates need to create and communicate a clear, compelling message for all voters -- that will give them a reason and the passion to turn out and vote Republican this fall.